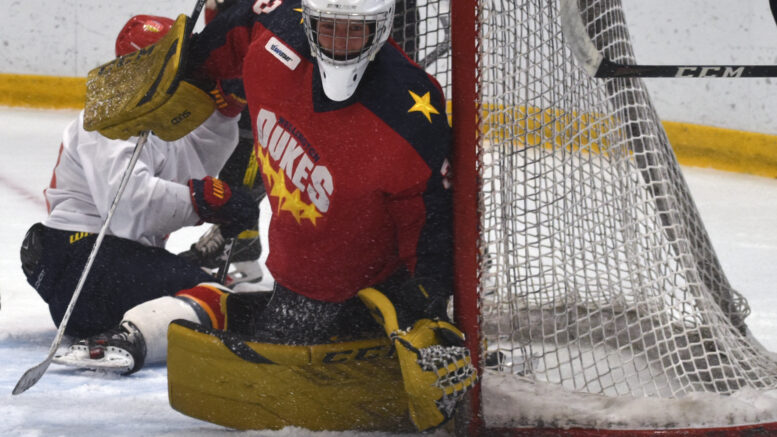 The Wellington Dukes are looking to the east and the west when it comes to building the Ontario Junior Hockey League’s next Eastern Division winner.

The local Junior A outfit announced a series of signings via social media ahead of its training camp slated to take place at Lehigh Arena Aug. 19, 20 and 21. Wellington benchboss Derek Smith admitted some of the newest Dukes recruits were a little fresh to the Junior A hockey fight however he expects the collective skill will far outweigh any growing pains the the young(ish) club will experience in the early going of the 2022-23 OJHL season.

“We’ve been able to hone in on some extremely talented players that really drew our attention and have earned an opportunity with the Wellington Dukes hockey club,” Smith told the Gazette Tuesday.

The Gloucester, ON native was already drawing Wellington’s attention back in 2021 as the 19-year-old had outstanding back-to-back seasons with the Ottawa Jr. Senators U18 AAA program and parlayed that into a second overall draft selection to Niagara Ice Dogs in the 2021 Midget Priority Draft. Last summer, Osborne put off Wellington for a season, choosing to attend Westminster Prep to suit up for the Marlets in Simsbury, CT but the 6’2” 190 lbs netminder is ready to face OJHL shooters this fall.

More recently, Osborne was outstanding for Wellington in the TEP Showcase in Toronto last month, leading the club deep into the final stages of the elite tournament.

“We stayed in contact with Jacob over the past year and let the process play itself out but we are very excited he’s a Wellington Duke,” Smith said.

On the back end, the club signed Tyler Alexander out of the St. Thomas Stars organization of the Greater Ontario Junior B League. At 19, Alexander, an Ilderton, ON product, is one of the older Dukes coming into the program this season. In 45 GOJHL games last season, the left shooting rearguard lit the lamp 10 times and added 24 helpers. Smith said Alexander is a large bodied, smooth skating defenceman that can make a good first pass, move the puck well and “plays with some bite.”

“Tyler’s played parts of four seasons in the GOJHL so he knows what it takes to play junior hockey,” Smith said.

On the opposite end of the spectrum, Wellington acquired a nice building block in the form of Emeryville, ON native Connor Paronuzzi out of the Chatham Maroon program. At 16, Paronuzzi looked right at home in junior hockey, scoring 11 goals and adding 36 assists in 46 games to be better than a point-per-game player.

“He had a great first season in Chatham as a 2005-birth year player. He’s very intelligent, sees the ice extremely well and does all of those little things that indicate he’s got the potential to go really far in his career,” the coach added.

The club also announced it had signed fellow centreman Zander Latrielle out of the A21 Academy in Windsor, Bradford native Will Poot out the U18 York Simcoe Express and winger Ethan Walker from the GOJHL’s Niagara Falls Canucks.

With a stack of incoming players to house, the Wellington Dukes are looking to re-establish their billet system to pre-pandemic levels. County native Lynsey Ferguson is performing the role of billet coordinator this season for the hockey club. Those with a suitable home receive seasons tickets and a monthly stipend and Smith said the lasting connections between and player, his family and his billet family are unlike any other.

“It can be a rich and unique experience,” Smith said. “The players we recruit are very focused, they all have post-secondary aspirations with NCAA programs and are looking to balance school and hockey in a safe environment. There’s a real team feel to our program and I would implore anyone interested in being a billet family this season to reach out to Lynsey and discuss it further with her.”