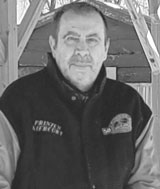 WRIGHT, Edward Charles
1953 – 2022
With sadness, we announce the passing of our beloved brother, Edward (Ed) Wright age 69, at the Prince Edward Hospice, on August 3rd. He fought a brave but short battle with cancer. Predeceased by his parents, Kathleen and George Wright and his sister, Marilyn Nasadyk. Survived by sisters, Lynda Simpson (Jim), Eileen Whittle (Mike) and Shirley Hardy (Mick). He will be greatly missed by his many nieces, nephews and cousins. Edward was well known in The County and was very active in a number of charitable organizations. He had a great love for the car races in Brighton, the WWE and his fall camping trips. Edward was a very generous individual and always willing to lend a hand to both family and friends. He will be greatly missed by all. The family sends a special thank you to the doctors and nursing staff of the Prince Edward Memorial Hospital and all of the amazing staff at the Prince Edward Hospice for the care and understanding provided. A memorial service for Edward is being planned and details will be announced next week. The family would appreciate any donations in Edward’s memory to be made to Prince Edward Hospice, Prince Edward Memorial Hospital or the Cancer Society.