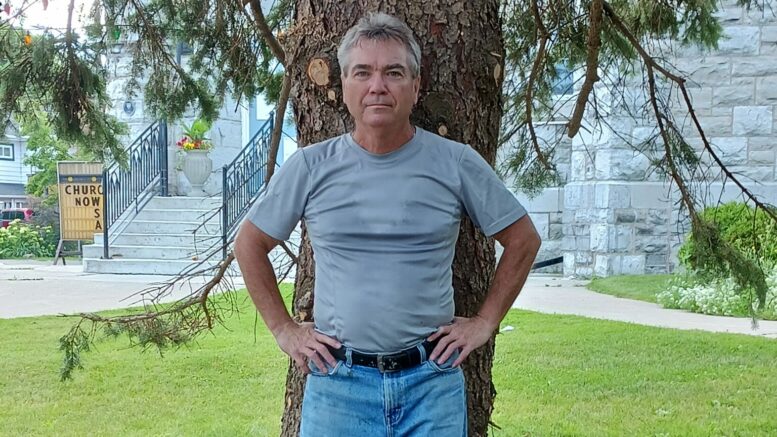 GOOD SAMARITAN- John Lyons stands in front of a stately spruce tree that he is rescuing from the stranglehold of wild grape vines. (Sarah Williams/Gazette Staff)

Like their domestic counterpart, wild grapes vines are proliferating in the county. However, unlike those that grow in vineyards, the wild grape vines are sometimes known to choke out other vegetation. Local John Lyons didn’t need to look any further than the giant spruce tree in front of the United Church before he decided to take matters into his own hands.

Speaking to the Gazette about his good Samaritan effort to rescue the tree, Lyons mentioned he noticed it’s deteriorating state on one of his many trips down Mary Street to avoid the main drag during the summer months.

“I’m a local, so we all stick to the back roads due to tourist traffic, especially this year because of Main Street construction. So, I’ve been driving by this tree quite a bit. Last year, I noticed all the grape vines getting up into the tree and wondered why it wasn’t getting looked after,” said Lyons. “This year, I started thinking the same thing and the vines were worse.”

Lyons mentioned he came about offering to help the tree by happenstance when he sought genealogical records at the Picton United Church.

“So, I do family genealogy and found out one of my ancestors might be buried at White Chapel. Picton United Church has authority over the White Chapel, so I came here to see if they have any records,” explained Lyons. “Unfortunately, they don’t, but while I was here I brought up the subject of the tree and asked if they had anyone to look after this sort of thing. So, I asked if I could look after it for them and they were thrilled.”

In speaking with the paper, Lyons pointed out the landmark tree in front of the United Church is just one of many being choked out by vines.

“To me, this is a landmark in Picton. This thing really needs some help…the entire county is suffering a plague of wild grape vines. They will, if you let them, kill an entire tree,” he expressed. “The County is working on a new tree policy, but I believe that’s to replace mature trees coming to the end of their life span. This problem with the wild grape vines infesting and killing trees is something else they’ll have to look at. Of course, mother nature doesn’t wait for municipal staff studies. It’s killing trees now.”