It was hot this weekend but that seems to be the natural order of things. After all, when hasn’t the culminating event of the Prince Edward County Soccer Association not been greeted with a wave of oppressive heat and high humidity?

Your humble scribe had the honour and priviledge to get back out on the Johnson Street pitch this season and lend a helpful hand, a coach’s voice and, most importantly, a cooler bag loaded with ice-cold frozen treats for post-game cool downs to a U5 Timbit unit better known as the Bumblebees by virtue of our dayglo yellow and black kits.

Convinced my coaching days were behind me after a couple of turns with some U7 and U9 squads not quite a decade ago, the potential joy of coaching a grandchild (and ensuring there was a team for a late registrant to participate on) was enough to get this lumbering frame onto the well manicured grass opposite PECI Thursday nights.

A booming voice and a breezy approach served this scrivener-turned-soccer sage well in 2022. It was easy to remain heartful through the campaign into the year-end festival where proud PECSA papa Scott Wentworth reminded each youth soccer team as they received their medals the “first rule of soccer was having fun!”

And did the kids participating in PECSA have fun this season.

For the U5 grouping, this season was not only their first youth sports opportunity but for many, it was their first organized social interactions after the prison of COVID had put bars around their hopes and aspirations. Provided you don’t take anything too seriously, you can’t help but have a good time volunteering in youth sport.

The Bumblebees made for fun nights. You’ve got your keeners-that’s a given. The grandson Hunter soon caught the thrill of scoring goals. So too did Davey who quickly figured out his left foot was much better to kick with than his right -despite his coach’s early instructions.

But you’ve also got your tumblers and grass sno-angel makers. Little Lachlan and Emma were brilliant at mid-game summersaults.

You’ve got your conversationalists. During one game, a circle of five or six “players” decided running back and forth, chasing a ball was passé and a full on “So, what are doing with the rest of your summer?” gab fest broke out at mid field. Mieke and Maud were among the league leaders in either distracting the other team or this coach. “Hey Coach, did you know…?”

Joni was the team conscience and seemed to know who served as captain last game and whose turn it was to call heads or tails this week.

Jack C and Conor are best of friends which meant under no circumstances were they to be on the field at the same time, particularly if playing soccer was the task at hand.

Jack M was very shy so we needed to talk farming- John Deere tractors and did you get your corn in yet? One game, standing firmly by his coach, he made not one but two saves in succession as booted balls rebounded off his tiny shin pads and rolled harmlessly away from the area. Completely unintentional in the last minutes of a close game if we were keeping score. I asked if he knew what just happened. He looked at me and sort of shrugged.

Paul was the big guy with the big kick and I think I was far more happier about his first ever goal off a converted penalty than he was.

Everleigh was always happy and Violet was equal parts shy but progress in developing a life-long love of the beautiful game was made in both.

To PECSA organizers, volunteers and officials-a hearty and heartfelt salute. This world has been turned on its ear since mid-March 2020 and those who have been bearing the confusion the most are the tiniest humans. But in Prince Edward County this summer, a lot of those little ones got a big dose of normal. That’s because of you. Everyone associated with the organization should take pride in the programming and what was accomplished.

It was a good summer at the soccer field. 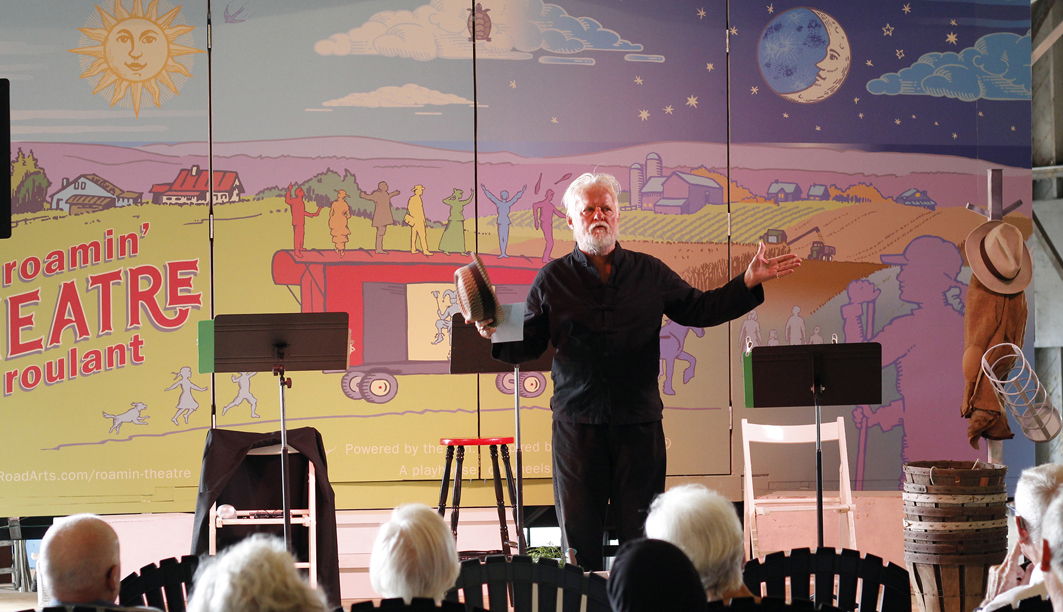 “Roamin’ Theatre Roulant, Canada’s only travelling theatre on wheels is on a roll throughout Prince Edward County this summer with THE BOXCAR COWBOY, an original stage play by Conrad Beaubien (pictured). Based on a true story, the piece follows the journey of a local Hillier boy who, one morning just before his 16th birthday and at the time of the Great Depression, hid away in a rail freight car and traveled the country east to west for thirty years afterward, living the life of a drifter. On August 20-21 Roamin’ Theatre Roulant will be returning to Base 31 for shows in the Drill Hall at 2:30 pm. For more information visit www.stationroadarts.com/now-playing (Desirée Decoste/Gazette Staff)