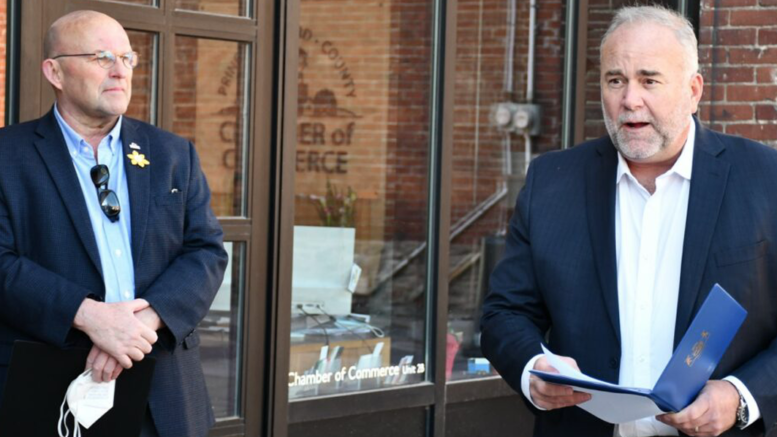 A provincial agreement with a trio of high-speed internet service providers is expected to help blanket the hard-to-reach areas of the Quinte region including remote areas of Prince Edward County.

The announcement marks another milestone in the province’s plan to help connect every corner of the province by 2025. In 2021, Ontario passed the Supporting Broadband and Infrastructure Expansion Act, 2021 to help speed up construction of broadband projects. To build upon this legislation, the Ontario government passed the Getting Ontario Connected Act, 2022 which further reduces barriers, duplication and delays. The government estimates there are as many as 12,040 underserved homes and businesses in the aforementioned municipalities.

“We know residents and business operators here in Bay of Quinte are increasingly dependent on online connectivity and, for many, it has been challenging to find reliable service,” sad Smith. “With these agreements, our government is delivering the necessary investment to bring this vital infrastructure into their communities.”

The announcement was greeted with enthusiasm at Shire Hall where the need to connect the more rural areas of the municipality with high speed internet to ensure local businesses and those participating in academia have the same playing field as their more central counterparts.

“We are excited to see continued progress toward the delivery of high-speed internet access for unserved and underserved areas in Prince Edward County,” said Mayor Steve Ferguson. “Members of our community increasingly rely on the internet to work, learn, run their businesses, and connect with the broader world. We commend the Ontario government’s efforts to enhance this critical infrastructure and the investments that have been made to expand access, especially to those living and working in rural communities.”

Kinga Surma, Ontario’s Minister of Infrastructure added the province is ensuring every community in Ontario has access to reliable high-speed internet, having committed over $950 million to nearly 190 broadband, cellular and satellite projects to date, bringing faster internet access to over 375,000 homes and businesses across the province, and significantly improving cellular connectivity throughout Eastern Ontario.

“We are making a positive difference in the lives of individuals and families in Bay of Quinte. Through our tremendous progress, more Ontarians will be able to have access to reliable high-speed internet no matter where they live.”

This announcement is part of Ontario’s investment of nearly $4 billion to bring access to reliable high-speed internet across the province which will help ensure that every home and business, in every community, can participate in today’s economy.

“We have lobbied very hard for improved internet services for the past two terms of Council. We do this because we know this important for residents and businesses. The Covid pandemic and remote school/work has only shown how much we need improved services. We are very pleased to hear that these changes will be in place for our region by the end of 2025,” added City of Belleville Mayor Mitch Panciuk.

Expanding access to high-speed internet is part of Ontario Onwards: Ontario’s COVID-19 Action Plan for a People-Focused Government, which includes more than 30 projects that are changing the way people and businesses interact with government.