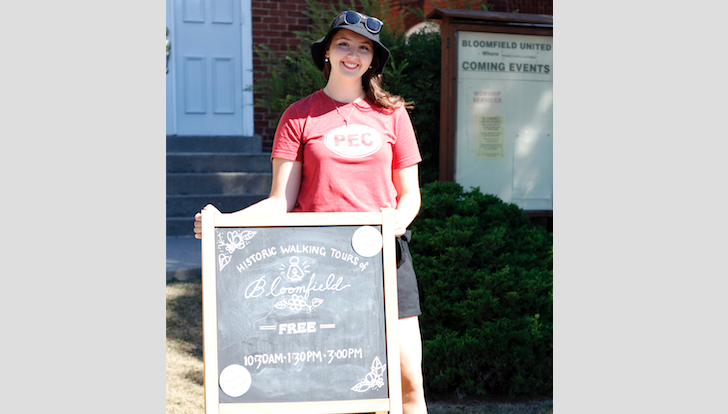 A tour that  harkens back to the the glorious past of a blossoming village located in the heart of Prince Edward County will wrap up later this month.

Bloomfield United Church, in supporting the local community, has launched a historic walking tour of the village’s beautiful downtown at the beginning of summer called ‘Walkin’ Time’.

The tour is offered until Aug. 21 and runs Wed. – Sun. 10:30am, 1:30pm and 3:00 pm. People are encouraged to take advantage of this free tour to learn around 200 years of history of how Bloomfield, formerly known as Bull’s Mills until the village’s name change in 1833, bloomed from an early Quaker settlement into a hardworking industrial village.

Tour guide Maria Stacey recently graduated from McGill University and was intrigued by the opportunity to guide locals and visitors on a walk through the village’s history.

“I was wondering what I was going to do now that I had graduated,” stated Stacey. “Then I saw the tour guide position and that it was in Bloomfield and I thought that was really interesting because my family actually has their roots in Bloomfield. I studied history in school so it was right up my alley, so I applied for the job and went through that process and then I got the job and I was able to kind of do my own research for the first month.”

The tour covers three main categories- the first being religious life with the tales of the rise of Methodism and the many Quaker schisms that occurred.

The second is the beautiful brick houses in Bloomfield and the village characters that lived in them and the third covers work and business in Bloomfield.

“It’s really fun because you’ll get locals in and they’ll share their own stories but then you’ll have people who have never been to Bloomfield before and that’s also really interesting to take the tours for them as well,” Stacey expressed to The Gazette. “Its been a good mix of people.”

The tour is sponsored by the Bloomfield United Church and is funded through a grant from the federal government through the Canada Summer Jobs program and supported by local MP, along with the support from the Bloomfield and Area Business Association and the Bloomfield Information Centre.