The Picton Marina is a time-tested safe harbour for a multitude of entities including many varieties of waterfowl.

But it was certainly a ‘bird of a different feather’ that found shelter amongst the high banks and calm waters on Monday and Tuesday. 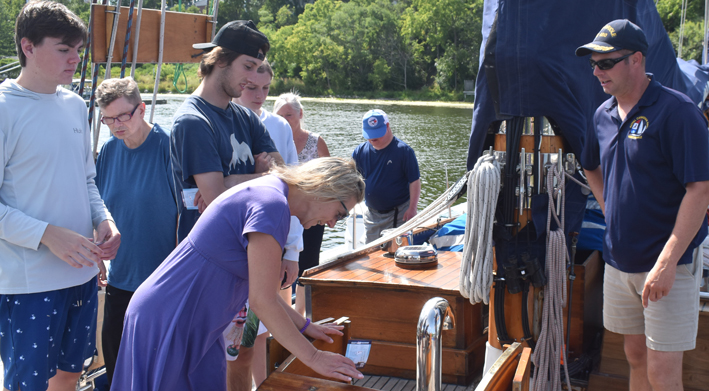 The HCMS Oriole quietly slipped into the local port as the 21 person crew enjoyed a two day stopover in Prince Edward County. The Oriole is the Royal Canadian Navy’s Sail Training, public outreach vessel and longest-serving commissioned ship. Built for the Gooderham family and launched in 1921, during the Second World War the ship was loaned to the Navy for training purposes and later commissioned into the service in 1954 based out of Esquimalt, B.C.

In 2017, Oriole sailed around through the Panama Canal and back to Halifax where it is now stationed. Oriole has served continuously since 1921 in both private and military roles, and is celebrating 101 years in service this year.  While docked locally, visitors were able to climb aboard the Oriole, speak to the crew, learn more about the Royal Canadian Navy and marvel at the two mast vessel launched 101 years ago.

What is believed to be the Oriole’s first visit to Picton is part of the Great Lakes Deployment 2022(GLD) which sees the Royal Canadian Navy (RCN) visiting communities along the St. Lawrence Seaway and Great Lakes. Acting Sub-Lieutenant and RCN Public Affairs officer Scott Ferris said Oriole sailed out of Halifax harbour and bound for the St. Lawerence and Great Lakes on May 12 after crew training commenced in mid-March.

“It’s a great way to spend the summer but it’s a very demanding naval experience for the ones that are chosen to take part,” Ferris said. “It’s a small boat with a 21 member crew so you learn inter-dependance right away. You are never in one place for any time on this ship.”

Among those eager to see the Oriole come into the Picton Marina and tie up was Tenacity Capital’s CJ Thompson.

This summer marks the first year of the operational agreement between the Picton native and the County of Prince Edward to make improvements and operate the harbour.

“It’s exciting when the navy reaches out and asks ‘May we come in to Picton Harbour and tie up here’ and I don’t know that you can really say no to the navy let alone the longest and oldest serving ship in the RCN,” Thompson told the Gazette. It’s a great opportunity for the public to take part in and it’s also a chance to showcase the improvements here at the marina and we hope there are more big ships that are able to come in the coming years.” 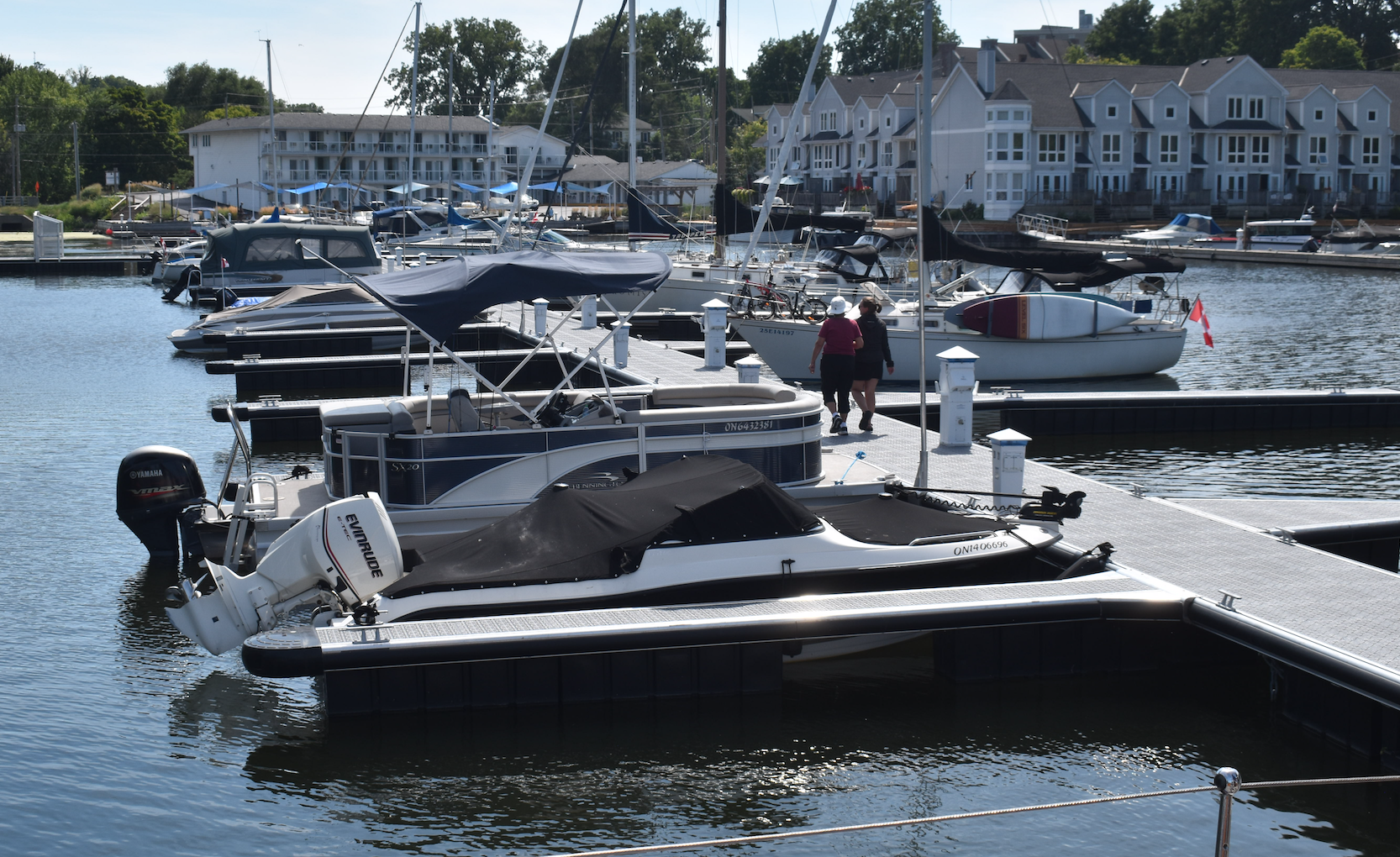 With a draught of 3.1 metres, Lieutenant Commander Robert Pelton was keeping a keen eye on the depth finder as he maneuvered amongst the shoals and shallows in Picton Bay but did note the protective nature of the harbour that was and remains a popular weathering spot for ships looking to stay out of heavy winds. As expected, Pelton takes the helm of Oriole with pride.

“I say this often-In the (RCN) there’s a lot of frigates, a lot of Maritime Coastal Defence Vessels but there is only one Oriole. It’s a gem and it’s a high honour to be one of the few to have command of this ship,” Pelton told the Gazette.

While a small number of the crew hung back at the Oriole to help educate the public about the ships, its mission and life in the RCN, other members took the opportunity to have a few hours of rest and relaxation at Sandbanks. The crew was also destined to dine on Prince Edward County-grown sweet corn later Monday evening.

Pelton, who has had command of the ship since August, 2020, likened the Oriole to the Royal Canadian Air Force Snowbirds in that it the vessel was a show ship to spark interest in the RCN and to provide the entry for the public to discuss what life in the service on the sea is all about.

“When the boat is under full sail, the generator is off it’s incredible how quiet it can be if there’s not a lot of wind noise,” Pelton said. “It’s certainly a different feeling than if you are on another RCN vessel and you get a true appreciation of the experiences of sailors that served way back in history with regards to the elements…You get to learn the difference between wind burn and sun burn very quickly.” 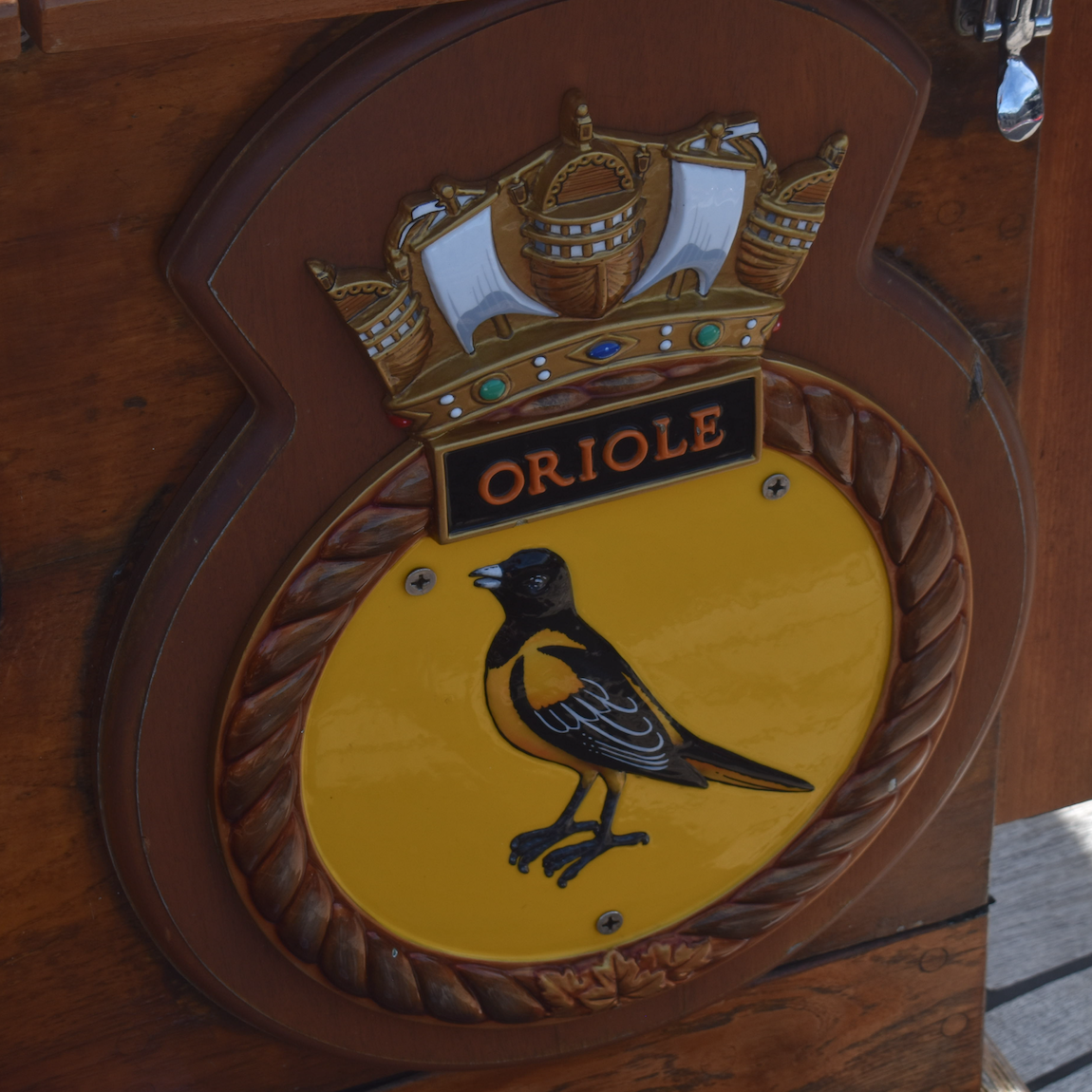 With the water down to it’s typical mid-August level, Pelton said the ships course ensured the depth was “four-ish” metres to keep a one metre buffer between the keel and the bottom of the bay.

As mentioned, Thompson hopes the Oriole’s visit leads to other tall ships and motor yachts coming into Picton Marina as the vision for an improved marina is realized. Thompson explained the improvements are phasing in as time goes by.

A supply chain issue has pushed back the ability to have electrical hook ups at the slips but it’s expected those conduits will be operational by the end of the boating season. Boardwalk lighting will be a part of that electrical install.

“There’s been consistent foot traffic since the boardwalk was installed and opened but the public has been asking about food outlets,” he said. “We’ve been successful working with council on some rezoning that will ensure that going to happen. Thompson mentioned the composite material used in the boardwalk build is made in Canada, used around the world in the best marinas and allows 55 per cent more sun light to pass through to promote aquatic habitat growth.”

Speaking of home, HCMS Oriole is expected to return to its home port in mid-September.

“A three and half month deployment has its challenges and we each have our own way of dealing with the home sickness and those types of things but my hope is that the friendships that are built during this time can remain strong throughout the crew member’s naval career and beyond,” Pelton said.

The Lieutenant Commander noted the best sailing on the trip came in the Georgian Bay area whereto boat was able to get up to 11 knots under full sail.

“Everywhere we’ve visited so far, there’s been someone that’s been onboard before. In Collingwood, there was a former crew member that was part of the second-ever crew that served on the Oriole back in the 1950’s when he was at Esquimalt so it was a real special time for him to come aboard, have a look and share some stories,” Pelton added.