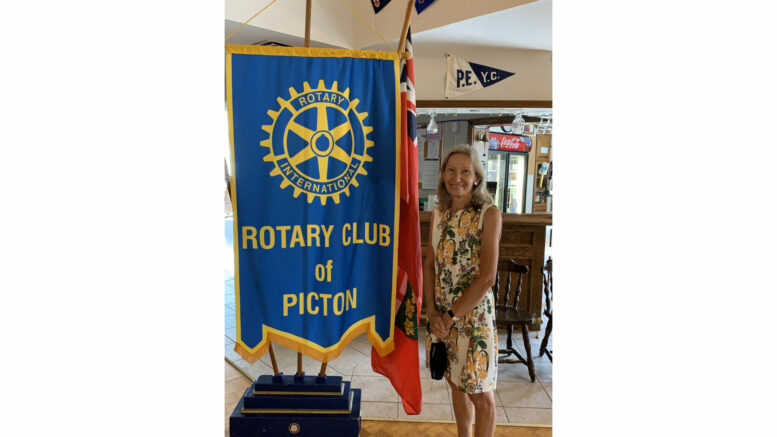 Local Mary Jane Starr spoke to the Rotary Club of Picton on Tuesday about the Royal Canadian Geographical Society (RCGS) which she is a part of and brought along a giant floor map for Rotary members to engage with. (Submitted photo).

At the seventh meeting of the 2022/23 Rotary year, The Rotary Club of Picton welcomed local guest speaker Mary Jane Starr, Fellow of the Royal Canadian Geographical Society (RCGS) at the Yacht Club in Picton on Tuesday.

Starr joined the RCGS in 2006 following a career with the Government of Canada where she held executive positions within the federal government at Library & Archives Canada, as well as the Department of National Defence and the Department of Foreign Affairs.

Starr, who brought along a giant floor map from the giant floor map initiative of the RCGS, ran an interactive meeting to help spread knowledge about locations and how a map works. The Society itself runs two programs principally, the Canadian Geographic Magazine, which has been operating since May 1930. The second program is Canadian Geographic Education, which more than 26,000 Canadian educators, parents and students belong to and take advantage of with educator resources that are made freely available in english, french and in some instances, indigenous languages, both digitally and through mailings.

“We were inspired by the National Geographic Society in Washington who we work closely with. In fact our late honorary president Alex Trebek has supported both us and National Geographic in the education field for some years and very generously,” expressed Starr. “Maps are available to any of the members of the Canadian geographic education free of charge for a two week period. The society manages the program and the maps go out to all the provinces and territories. It’s a bit of a logistical challenge, but one we’ve been able to meet. And the reason we can do it is because the funding that comes from our partners.”

The RCGS has worked with Elections Canada, the Canadian Association of Petroleum Producers, the Indigenous Peoples Atlas of Canada with the assembly of First Nations, the Métis National Council, ITK, the National Centre for Truth and Reconciliation and more.

“This map that I have here today was produced with Parks Canada when they were celebrating their centennial in 2011,” Starr said. “Canada can boast the first national park service in the world, it was created in 1911.”

Starr pointed out some of the essential elements that every map must have.

Rotary Club of Picton members enjoyed engaging in an exercise where they could identify National Parks using latitude and longitude.

“My conclusion would be that we can see the power maps have to inspire us,” Starr concluded. “They are, I suppose in one way, way-finding devices as they help us find our way as we go forward and as Andy (Janikowski) pointed out to me recently, they also help us go back and help us relive some of our experiences. They are in a sense, way-back machines as well. They may be way-finding devices but for some of us we can still lose ourselves in maps.”