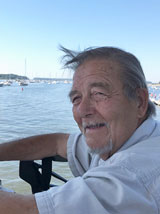 WATT, Hart Robert Samuel
Born in Picton Ontario on November 14, 1941, Passed away peacefully at his home in Thornton Ontario after a short but courageous fight with cancer on August 12, 2022. Predeceased first by his wife Donna (nee Mattice) and then his partner Brenda Warner. Loving father of Brandon Watt of Kingston, Ontario. Predeceased by his parents Bill and Grace (Hollingsworth) Watt, his grandparents Samuel Hart Hollingsworth and Cecile Amanda (nee Williams) and his brother James Edward Watt. At Hart’s request a Going Away Party and Dance will be held in Barrie at the Army Navy Air Force Veterans Club # 365 on September 3rd, 2022 at 4:00 p.m. Memorial donations may be made directly to a Veterans Charity of choice, Cancer Foundation of Choice or Canada Without Poverty. Arrangements entrusted to Peaceful Transition Simcoe and condolences may be forwarded through www.peacefultransition.ca