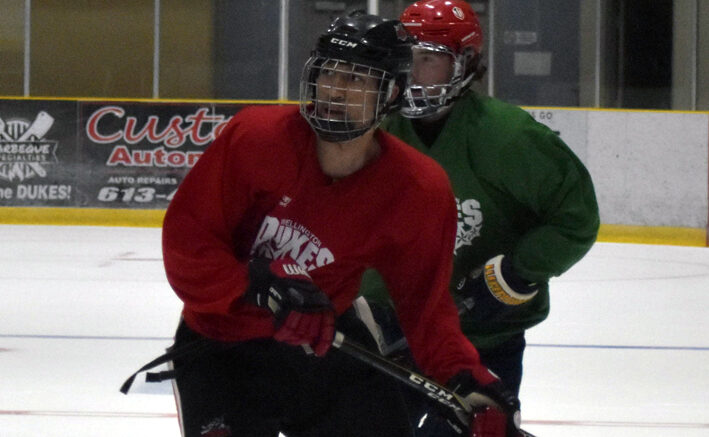 The Wellington Dukes didn’t spare the dramatics in their 2022 Ontario Junior Hockey League preseason opener on Monday night in Cobourg.

After a full weekend of practices and inter-squad contests, the local hit the road to tangle with the host Cougars to kick off a four game preseason set that will see them play an home and home with the Cats, the CCHL’s Smiths Falls Bears and a home contest against Georgetown.

With Dukes veteran Ethan Morrow starting in net, the Cougars would have the only goal of the opening frame as Parker Hendsbee lit the lamp with under four minutes to go in the first. In the second, the clubs traded goals. Edward Moskowitz continued to show a nose for the net that carried over from the intersquad games as his shot handed effort beat Ryan Piros 4:28 into the second.

After Andy Reist restatblished the Cougar lead, Moskowitz would set up Ethan Walker at the 9:53 mark of the second to tie the game at 2-2.

With both teams swaping out their goaltenders, Wellington hopeful Nolan Lane would face OJHL veteran Trevor Hoskin on a penalty shot attempt at 10:48 of the second.

Hoskin’s goal pushed the Cougars ahead going into the third. Moskowitz’s second of the game on the powerplay winth under six minuntes left tied the contest again, this time at 3-3. In the final minute, the points parade continued as Tyler Hunt seemed to have the dagger with 43 seconds left.

But with Lane on the bench for an extra attacker, Zander Latrielle would beat the buzzer for Wellington, forcing overtime with a second left on the clock. In the extra session, it would Hendsbee notching a bookend goal at 1:56 to give the hosts a 5-4 win.

Wellington hosts Cobourg on Friday night and then hosts Smith Falls on Wednesday, Aug. 31. The Dukes are in Smith Falls on Friday and then return to the Dukedome on Saturday, Sept. 3 to host Georgetown at 3 p.m.