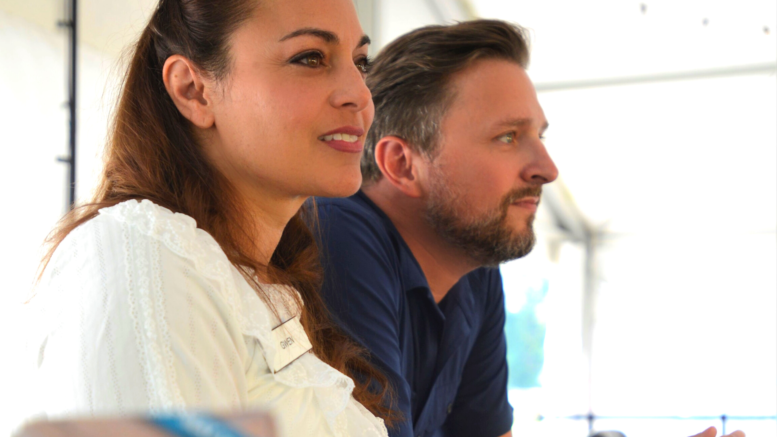 BEYOND THE SEA- (L-R) Jane Spence and Jeffrey Wetsch are pictured in the Festival Players' season finale Beyond the Sea. (Submitted Photo)

Beyond the Sea, a romantic comedy by Kristen Da Silva, is the last show of the Festival Players’ Season. Taking place at the Eddie Farm and Hotel’s outdoor pavilion in Wellington, the show stars Jane Spence and Jeffrey Wetsch. It is directed by Derek Ritschel.

“On a pier in a small town, a pair of strangers begin a conversation that may change the destiny of two lost souls forever. Theo and Gwen explore love, loss and the importance of looking forward. With humour and heart, they show us that no one is perfect … and in the end, that may be the greatest strength that we all share,” according to the Festival Players’ preview.

Interestingly, Spence and Wetsch, who play the main actors in Beyond the Sea, are not just a stage couple, but a relationship that spans decades.

When asked how their relationship status transfers from real life to the stage, Spence pointed to chemistry that can be felt throughout.

“I’d like to think there’s chemistry that might transfer into the role and the connection these two characters make winds up changing the course of their lives,” she said. “So, I’m hoping our connection resonates with the audience”

Wetsch added that, while the characters on stage are strangers, this can require some “fun acting games.”

“We have to keep reminding ourselves that we’re actually strangers and we don’t know each other and we don’t like being together,” he quipped.

Spence and Wetsch both have considerable acting careers. Spence began her acting career about 25 years ago in Vancouver but moved across the country to be part of the Stratford Festival, where she met Westch.

Wetsch also has an illustrious career spanning more than 20 years. His work includes acting on the tv series Mohawk Girls and the film Taken, among others.

Like other Festival Players productions, Beyond the Sea is being performed outdoors. Asked about how performing outside compares with the conventional, indoor stage, Wetsch was effusively positive.

“It’s actually been really quite lovely, especially for the evening shows, when the sunset sort of becomes part of the lighting of the show,” he explained. “It always presents some challenges when the world around you helps define what the experience of the play is going to be, so when you hear a cow, or a bug flies in front of you, as an actor you have to sort of let that be part of your world.  I think that’s what the audience loves. You have to roll with what is going on. We’ve been having a really lovely time.

“The play was written to be outdoors,” Spence added. “The fact that it is such a beautiful setting really adds to the reality of the play.”

Beyond the Sea runs from August 24-September 4, Tuesday-Saturday at 7 p.m. Matinee shows are available on Sundays. For more information, or to book your ticket, please visit: https://www.festivalplayers.ca/beyond-the-sea