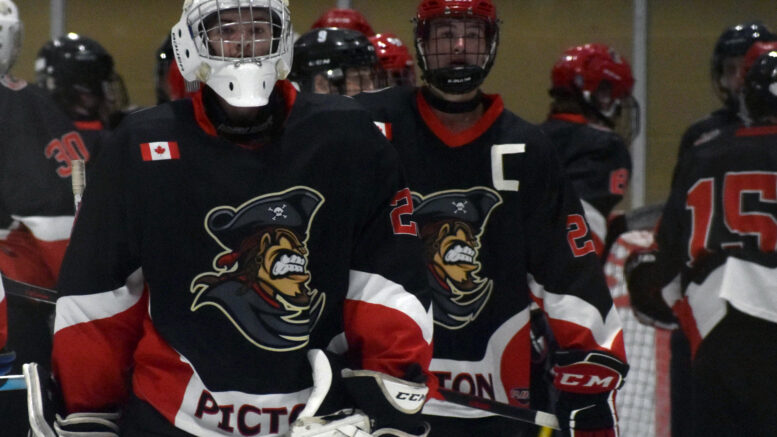 The Picton Pirates managed a split of their first two games of the 2022 Provincial Junior Hockey League season.

Icing almost entirely prospects on Saturday afternoon, the Pirates were bested 4-1 in Cobourg against the Campbellford Rebels.

A day later with a more veteran lineup, the Bucs were able to comeback from an early 3-0 deficit to skate away from the visiting Napanee Raiders in Wellington 7-5.

“Overall, it was a very telling weekend and that’s what you want this time of year,” Pirates General Manager Jason Parks said. “Who is ready off the hop, who’s not, who is ready to battle and command ice time-it’s all part of the process.” 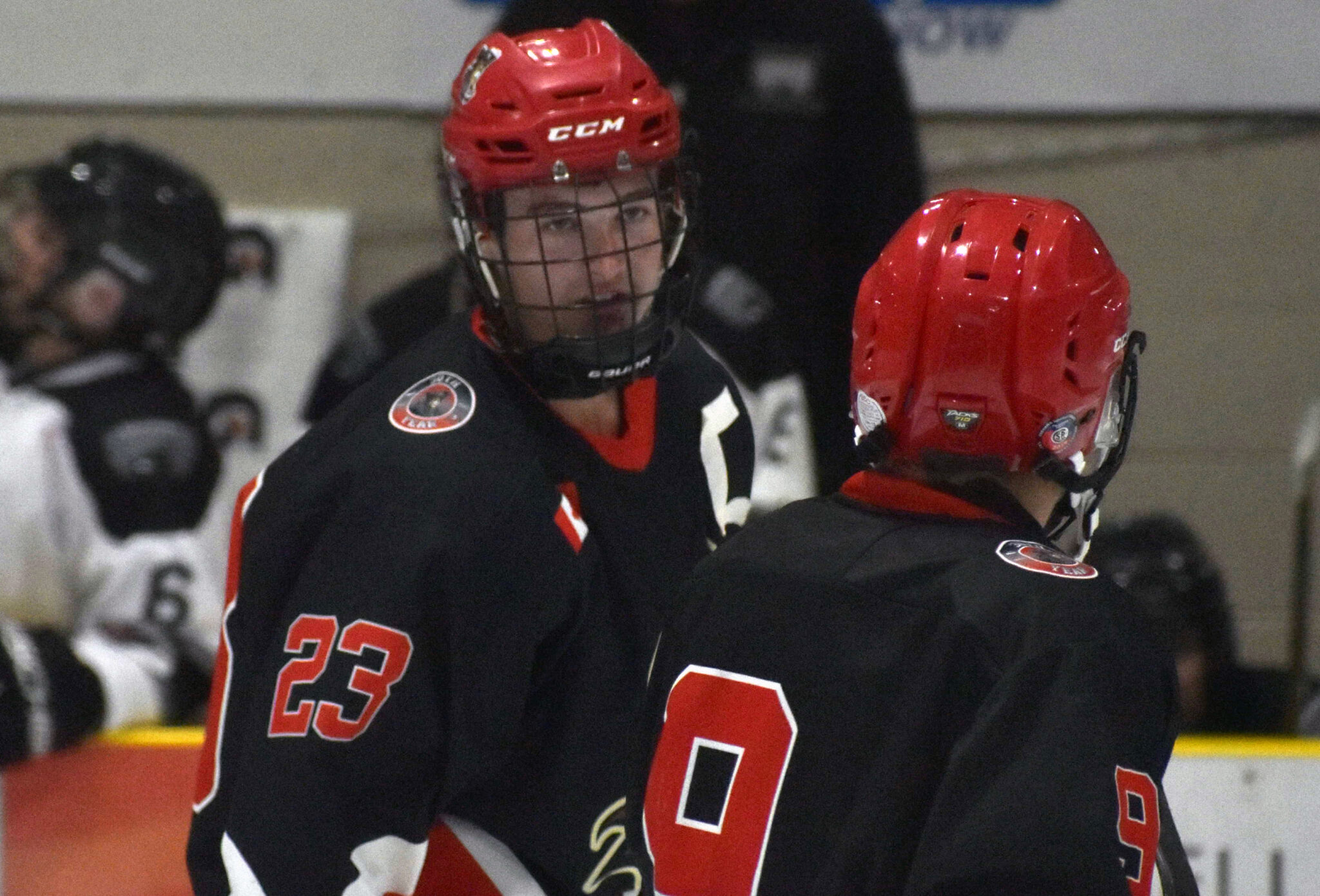 On Saturday, Picton got behind the eight ball early and was trailing 3-0 midway through the game thanks to goals by Brock Kelsh, Charles Boucher and Aiden Trevorton. Late in the second,  Ben Smith collected an Issac Krentz feed and picked the top left corner on Noah Barker to close the gap at 3-1.

Picton nearly got to within a goal when Hosea Aculiak walked in on Barker in the first few minutes of the third but whiffed on a shot attempt.

Picton pressed but the host Rebs got clutch saves from Barker in the third.

Finally, Trevorton jammed home a loose puck past Picton goalie Ryan Aldridge with under two minutes to go to make it a 4-1 final. Up until that point, the Napanee Stars product was spotless after coming into the game at the midway point, replacing Aaron MacMullen.

On Sunday, the Pirates again found themselves trailing early but were able to overcome a multi-goal deficit.

Napanee regular Cameron Krupa had a pair of goals that sandwiched a Colby Cross effort and the visiting Raiders had a 3-0 lead inside the opening 10 minutes.

Picton got on the board at 10:20 when Nick Kirby fed Liam Philip for a shorthanded effort.

In the second, Philip picked up another tally at the 5:12 mark.

Picton managed to complete the comeback at 15:26 when Ross Maycock scored off the rush on a Gerrit Kempers feed to make it 3-3 going into the third. 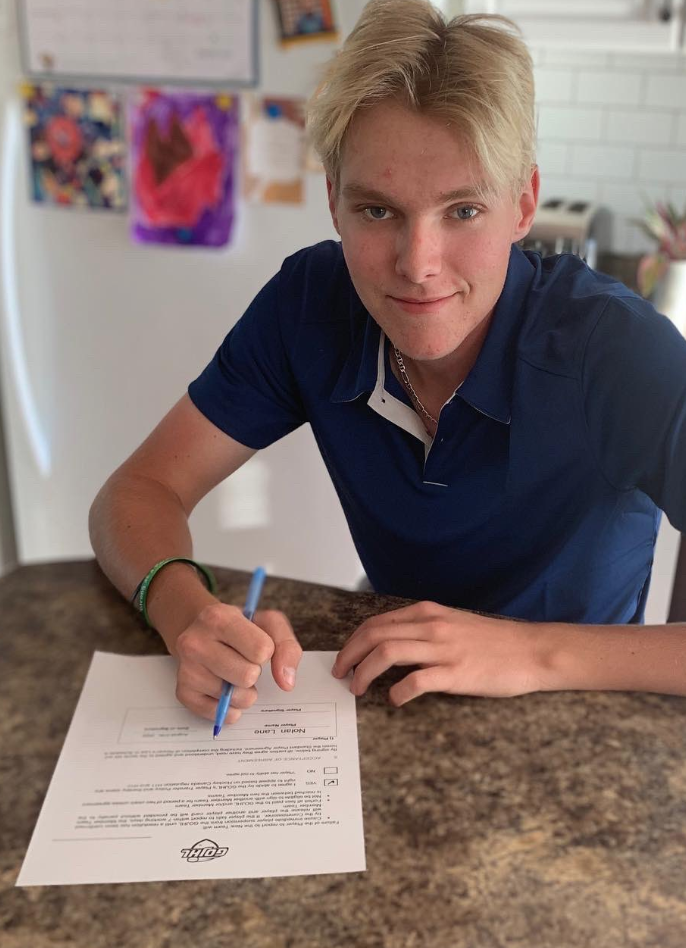 Wellington native and Picton Pirates product Nolan Lane will tend goal for the Fort Erie Meteors of the GOJHL this season.
(Twitter photo)

The locals didn’t wait around long to pick up their first lead of the season as Philip found Landon McLellan and the Picton captain picked the corner on Aiden Vallier 35 seconds into the stanza.

Just under three minutes later, a scramble at the Napanee net saw Ian Harrison jam home a goal to give the Pirates a 5-3 lead.

The clubs would continue to trade goals in the third.

Noah Jacobsen would bring Napanee back to within one at 6:21 but the Kleighton Grove converted a Ryan Bauder pass at 13:37 to make it 6-4.

The Raiders had one more push as Krupa set up Marshall McFarland at 13:37 but just 23 seconds later, Maycock potted his second of the game thanks to help from Grove and Ben Smith.

In the Picton net, Carter Page, who had a rough start in the game’s first ten minutes, settled down and kept the Raiders at bay in the final five minutes to protect the win.

The win had plenty of county flavour as Prince Edward natives Maycock and Philip each had a pair for Picton.

The Pirates head out onto the road on Labour Day weekend, playing in Napanee on Friday and Amherstview on Sunday.

ON BOARD WITH THE PIRATES: The club was elated to learn 2021-22 Rookie of the Year and Goaltender of the Year Nolan Lane has accepted an offer to play with the Greater Ontario Junior Hockey League’s Fort Erie Meteors this season. “Development is what we are all about and this is such a great development for our organization,” Parks said. “Nolan has worked extremely hard and utilized the opportunity he earned last season with us to move up the hockey food chain. To come from the County Kings to us and then parlay that into a GOJHL offer shows what kind of commitment he has to his craft. We wish him nothing but the best.”…With previous assistant coach Nick Kyte focussing on his budding officiating career, Pirates coach Kyle Hawkins Schulz has tabbed Rick Van Vlack and Mitch Burke to take on roles on the Picton bench. Van Vlack was part of the 2013 Schmalz Cup winning bench staff while Burke played for Picton as well as Campbellford from 2013-2017.