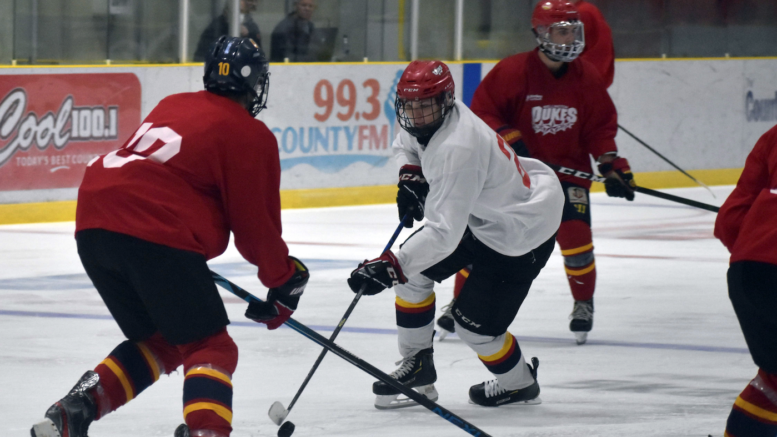 The Wellington Dukes welcomed their fans back to Lehigh Arena Friday night and pleased the faithful with a 3-1 win over the Cobourg Cougars in a contest that didn’t lack in intensity, physical play or all the other tenets of a regular season Ontario Junior Hockey League contest.

The win means Wellington remains undefeated in regulation through its first two preseason tuneups. And even If the locals go on to sweep a home and home set against the Smith Falls Bears of the Central Canada Hockey League and a single home game against the Raiders from Georgetown, all 21 OJHL teams start at the same record when regular season play gets underway next weekend.

But to veteran observers of this level of hockey, it looks from the tell tale signs of the preseason the Dukes brass have assembled another squad of players that can make the cold Friday nights of a winter in Wellington just a little bit warmer by the brand of hockey they bring to the rink.

“We’re pretty happy with how our camp went and the intensity is up which is going to make these decisions so much more difficult,” Wellington Dukes bench boss Derek Smith said after Friday’s win.

“This was the first game a lot of our vets played and they wanted to win which was impressive for this time of year.”

Wellington got off to a strong start and it was Edward Moskowitz taking a Corbin Roach feed in the slot and sweeping it past Cougars starter Matt Sborcca.

Moskowitz, a Toronto native who played for the Ottawa Jr. Senators last season, has come into the Wellington stable looking every part of one of the horses Smith will be looking at to inject offence into a contest.

The game’s opening tally was the third in two games for lefthand shooting forward.

“He’s a guy who has put the work in this summer and he and Roach have already developed chemistry so that’s a positive development. (Moskowitz) is one of the guys that we will be leaning on as the season progresses,” the coach said.

While he didn’t land on the score sheet, the second game in a row for Dukes winger Connor Hunt was a solid all around effort and great news for the Centre Hastings product that suffered a devastating knee injury just prior to the start of the 2021-22 season. Hunt was medically cleared to resume contact hockey earlier this month after a long stint rehabbing and building strength in his damaged joint.

Wellington’s overtime loss early last week in Cobourg was Hunt’s first game since the end of the 20-21 minor hockey “season”  that was COVID- abbreviated.

“His ability to step in and not look out of place is a testament to how hard Connor’s worked to get back here. He hasn’t played in an actual game for the better part of two years but he looks physically and mentally strong,” Smith said.

Wellington would extend their lead in the second when Zander Latreille fed Jaxon Boyer at the 6:42 mark of the middle stanza.

Boyer skated in to the top of the circle and ripped a puck high glove side to make it 2-0.

The Cougars would get one back later in the frame.

Brady Spry didn’t have much chance on a one timer from Parker Hendsbee at 12:26 that cut the Dukes lead in half.

But Spry was the better down the stretch, particularly in the third when the visitors had a number of grade A chances to square the affair.

Wellington starter Jacob Osborne ended up with the win, not allowing a goal in his 30 minutes of work and Spry held the fort dutifully to pick up Wellington’s first win of the late summer.

“Osborne’s calm and as advertised but all the goalies in our camp are pushing each other and that’s what you want this time of year,” Smith said.

Finally, Welington’s Jacob Vreugdenhil sprung David Campbell with less than 30 seconds left in the game and the speedster beat Sborcca on a breakaway effort with 22 seconds left.

Wellington hosts Smith Falls Wednesday at 7:30 and then travels to the Bear den on Friday.

On Saturday afternoon, the Dukes host the Raiders at 3 p.m. in the final tune up of the preseason.

The regular season gets underway Friday, Sept. 8 when the locals welcome Lindsay.