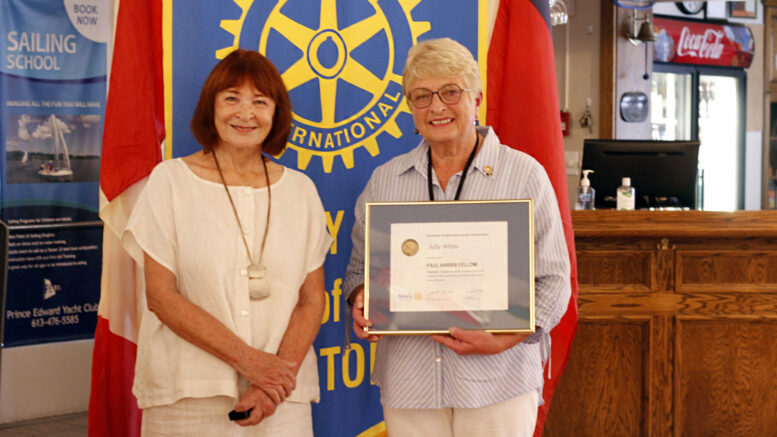 At Tuesday’s Rotary Club of Picton meeting at the Yacht Club, Julie White, a local community member was recognized and named a Paul Harris Fellow.

A Paul Harris Fellow is a person who has been recognized as having done something very significant to benefit others either within their own Rotary Club or their community.

White has been providing leadership in the charitable sector of Canada for over 30 years. As a partner in the consulting firm of Hirji + White (H+W), White provided strategic support to foundations and other grant making insitutitions.

Prior to H+W, White served as CEO of the Canadian Cancer Society and the National Cancer Institute, she was founding CEO of Philanthropic Foundations Canada, was CEO of the Ontario Trillium Foundation when they received the Canada Award for Business Excellence Certificate of Merit, was head of public affairs for Levi Strauss Canada, has an MBA from the Schulich School of Business at York University, was one of the founders of the Canadian Women’s Foundation.

“In 2010, Julie (White) pursued a long time passion for beekeeping and started Long Point Honey Company, producing certified organic honey in Prince Edward County,” said Past President of Picton Rotary David Burn. “Over the past 11 years, she had donated all the proceeds of the sales of her honey to organizations in The County, including Reaching for Rainbows, The Prince Edward Point Bird Observatory, The Regent Theatre, Festival Players, and Alternatives for Women. She also annually donates honey to local food banks. Recently, Julie set up an annual $500 bursary through The County Sustainability Group for a local farmer who illustrates sustainable practices to protect, preserve and promote pollinator health.”

Some of White’s volunteer contributions include the Advisory Board for Non-Profit Management at the Schulich School of Management; the Advisory Board for the School of Policy Studies at Queens; the Foundation for Healthy, Active Kids; the Centre for Research on Children, Youth and Families; New Experiences for Refugee Women; the Ontario Beekeepers’ Association; and most recently the Prince Edward Point Bird Observatory.

“Truly a remarkable history Julie,” Burn added. “And if ever our moto of service above self applies, it applies to you.”

“I just want to thank you all so much for this,” expressed White to Picton Rotary. “I would like to recognize my husband Ross McGregor who supported me in everything I do and he’s a community builder in his own right. And that’s what it’s really about, is building community and it’s why I’m so proud to get this because I know that Rotary is a community builder, and not just here in Picton where you’ve done extraordinary work in supporting the hospital for example but 130 countries around the world. I am so grateful that you recognize my little tiny contribution to this community.”