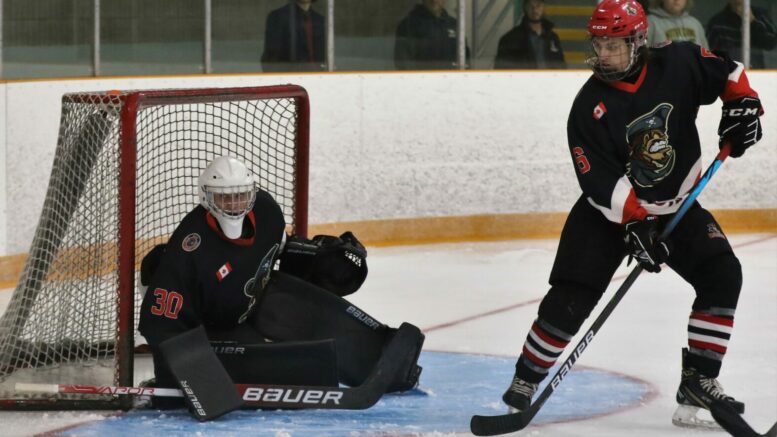 The Picton Pirates continued their preseason this weekend splitting a pair of road games in Napanee and Amherstview.

On Friday, the host Raiders shot out to a 5-0 lead and sunk the locals in an 8-2 drubbing but the Buss were able to right the ship Sunday in Amherstview and downed the Jets 4-1 to even their preseason record at 2-2-0.

On Sunday, Picton opened the scoring early in the contest when Hunter Matthysse spotted rookie Liam Philip while Amherstview was in the midst of a line change.

The Picton native was afforded time and space and put a well placed shot over Charlie Young’s shoulder at 3:56 for his fourth tally in three games. The Jets got that goal back just under five minutes later when Owen Bauder was able to send a puck through a maze and beat Picton starter Brady Spry at the 8:03 mark.

While each team had a number of chances in the second, both Spry and Young were spot on in defence of their respective nets.

At the midway point of the third, the Pirates finally busted through as Ross Maycock picked the top shelf on Young during a Picton powerplay.

Overager  Jack Dow set up the game winning tally at 9:46.

Later in the session, Philip would spring Landon McLellan in on a short breakaway and the Pirates captain finally solved Young at 13:46 after multiple good looks at the Amherstview net earlier in the game.

Cole Stevenson would bank home an empty netter with 2:10 left to salt the game away for Picton.

Spry, in his first game in Picton colours, made 39 stops.

On Friday, the Napanee Raiders were seeking revenge for a road loss late last month in Wellington and got it.

The hosts got five goals from five different scorers through the first 30 minutes of the game to effectively take the visitors out of the contest.

Christos Chronis, Reid Lambert, Jakob DaCosta, Will Potts and Marshall McFarland all beat Picton starter Carter Page before Picton’s Reese Hancock would take a Kleighton Grove pass at 12:33 and send Picton’s overager in alone on Bailey Maracle. Hancock outwaited the netminder and scored to make it 5-1.

At the midway point of the third, Raiders regulars Beckett Palmer-Stephen and Marshal McFarland scored powerplay goals to make the final 8-2.

Picton hosts Campbellford on Tuesday and then Amherstview on Thursday to round out their 2022 exhibition schedule.