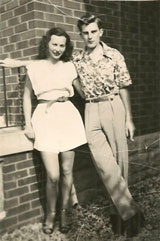 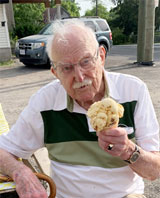 KING, John Barry
It is with the saddest of hearts that we share with you the unexpected, peaceful passing of John Barry King on September 3rd in Picton General Hospital. Our Father, Grandfather and Great Grandfather was born in Ottley, North Yorkshire, England on February 9, 1928. He emigrated from England in 1947 with the dreams of an ambitious, adventurous 19-year-old, and began a life filled with promise in Ontario. He married Marion (Jeanne) Jeannette Fox, from Cherry Valley in 1949, and together they started their family in 1950, that would grow to include 5 children. After years of living in the Toronto area our parents retired to Picton to enjoy the familiar setting of Prince Edward County and their cottage on the water on Long Reach. Dad was past President and an active member of Kiwanis for more than 20 years and attended the Picton United Church. Throughout his life he was actively involved in charitable community service, including Meals on Wheels, the local Food Bank and Sleeping Children Around the World. In later years after Mom had passed away, Dad married Myrtle Yeo, a long-time family friend. Although it was only a short period of time before he lost Myrtle, these were happy years for Dad. His last 5 years were spent living independently at The Wellings where he continued to embrace life. He remained active, enjoying restaurants, dances and card playing evenings and always making time for visits with his large family and close friends. He was up to date on current events and world affairs and was never shy about sharing his perspective on any topic. He particularly enjoyed time with his grandchildren and sharing playful activities with his great grandchildren, who he was very proud of. Barry was predeceased by Jeanne and Myrtle and is survived by his 5 children (Gary, Sandy, Royce, Laurel & Daryl) and their spouses (Jackie, Michael, Lois, Brad & June), his brother Nigel (Sue), his 5 grandchildren and 6 great-grandchildren & their families, his companion Phyllis and special friend Janet. He will be missed and remembered so affectionately. In lieu of flowers, contributions can be made to the Picton United Church or Sleeping Children Around the World. Memories and condolences can be shared at:   www.rushnellfamilyservices.com Arrangements entrusted to the Rushnell Funeral Home – Picton Chapel, 33 Main Street, (613-476-2450).