With thanks to letter writer Paul Allen this week, both the author and Canada’s Oldest Community Newspaper endeavour to help educate the local electorate starting this week in hopes of increasing participation in Prince Edward County’s municipal election Oct. 24th. Both online through Allen’s media page (pec.buzz/election-2022) and our own Picton Gazette website (www.pictongazette.ca/2022-municipal-candidate-profiles), candidates vying for office in the upcoming election are sharing bits and pieces about themselves, their reasons for getting involved and what their priorities might be should they find favour with local voters.

In case you prefer your news in newsprint, there are a few profiles sprinkled in this week’s edition and that will continue each Thursday until Oct. 20. In Allen’s letter to the editor this week, he points to a depressingly low Prince Edward County municipal voter turnout rate that hasn’t crested above 45 per cent since 2010 and even that high water mark 12 years ago was 47 per cent. So what is the best way to ensure voters make it to the polls later this fall?

Well engagement with candidates and starting conversations between elector and potential office holder is one method. There’s certainly no shortage of issues facing Prince Edward County and while it may seem hackneyed to say, this community is facing a crossroads in the coming term. Water rates in this aging community are exceptionally high-among the highest in Ontario and there’s obvious reason-municipal government operates more than a handful of drinking water systems in addition to paying through the nose for the pleasure of being connected to systems that pump water from neighbouring municipalities.

Developing a new way of serving county water/wastewater users without them regulary paying an arm or leg for something that separates them from every other municipality in Ontario would be a tremendous accomplishment for the elected who will serve in Council’s next term. Escalating interest rates have let some steam out of the seemingly impenetrable local housing market bubble for now but those desperately seeking their Prince Edward County dream home-read a shelter with a solid roof and four walls- aren’t exactly rejoicing just yet. There’s still a long, long way to go locally and recent forecasts on provincial population indicate pressures on housing stock will remain ever present in the coming years. Municipal government will likely need to double its affordable housing efforts and think way outside the box to even make headway. The current physician shortage facing many locales in this country are not foreign to Prince Edward County although the salad days of having a healthy compliment of incoming family doctors thanks to Queen’s University rural medicine program looks like it’s permanently in our rearview.

With an aging population and complex healthcare needs typically associated with ahem, more experienced folks, our doctor shortage is running neck-and-neck with our housing shortage in terms of the most dire of situations. Now is the time to get the lay of the land amongst candidates.

What could our municipal government do different in the next term to make Prince Edward County more liveable? What new ideas might circumvent these brewing issues? Let’s have the conversations and make informed choices on Oct. 24th. 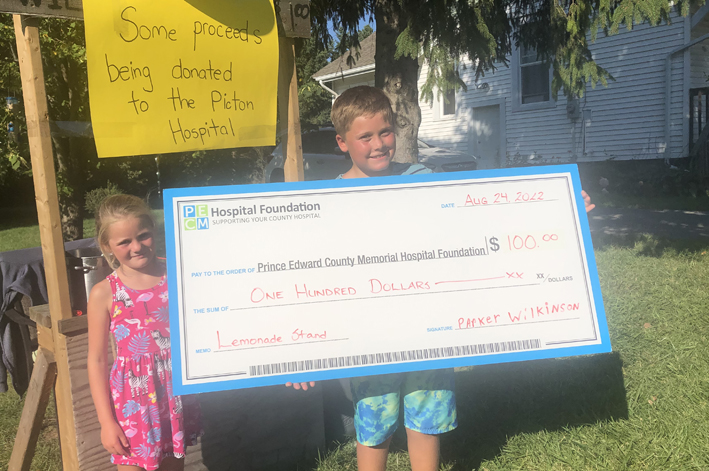 Parker Wilkinson (10) along with his sister Liv (7) hosted a lemonade stand, raising money to help the Prince Edward County Memorial Hospital Foundation purchase of a new x-ray machine needed at our County hospital.
With help from their parents, Parker and Liv set up a lemonade stand outside of their Bloomfield home on Wednesday, August 24. The young entrepreneurs spent four hours selling summer’s most refreshing beverage and contributed $100 from their earnings towards the x-ray machine. This is the second year Parker has hosted his lemonade stand. In 2021, he donated a portion of his proceeds to the Loyalist Humane Society. (Jason Parks/Gazette Staff)