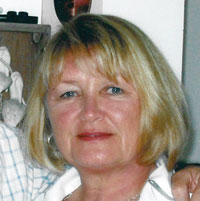 McKAY, Patricia Anne “Patti”
November 13, 1952 – September 8, 2022
Patricia Anne McKay (nee Duffy) died in her home in Picton, Ontario on September 8th, 2022, surrounded by her loved ones. Surprising no one, Patti wore pyjamas and organized the party herself. Her three children, Luke (Lori), Kyla (Jeff), and Lauren (Stefan) and her husband, Michael, whom she cared for the past 20 years, will never stop missing her. Her 5 grandchildren, Lucy, Charlie, Luca, Iris, and Audrey carry on her spirit. She is survived by her three sisters, Barbie (Alex), Kathleen (Kevin), and Karen (Jim) and Michael’s brothers, Terry (Helen) and Neil (Joan). Patti was born in Owen Sound on November 13th, 1952 to Bill and Adele Duffy, the first of their five children. The family soon moved to Port Colborne, where they developed a reputation for great parties and terrible haircuts. As a teenager, Patti dreamed of one day carrying a wicker basket to buy her groceries in Kensington Market. She made that dream come true when she enrolled at the Toronto General School of Nursing, graduating with the last class in 1974. From TGH to Sick Kids to Sunnybrook, Patti cared for her patients with skill and compassion. Patti picked up her husband-to-be, renowned local gymnast Michael McKay, at a bar in Port Colborne in 1977. Just four ‘short’ years later, she married him in a dress she sewed herself. In 1983 they had their first child, and within 3 years there were 3. Nobody has seen her sit down since, but she certainly never complained. Patti made everyone around her feel special, none more so than her children, for whom her patience and affection never waned. Fifteen years ago, Patti bought a B&B in Picton on a whim. A gifted cook and generous host, she thrived in her new role. Many of her guests are now, simply, her friends. We will miss her laugh, a cackle that could break glass, and the way she commanded her kitchen, wine in hand, singing loudly, and dancing the pony (usually in pyjamas). To be with her was to be joyful, to have been loved by her was to be loved wholly. A Celebration of Life will be held in her honour at noon on September 17th at the St. Andrew’s Church in Picton. Donations to the ALS Society of Canada can be made in her memory.