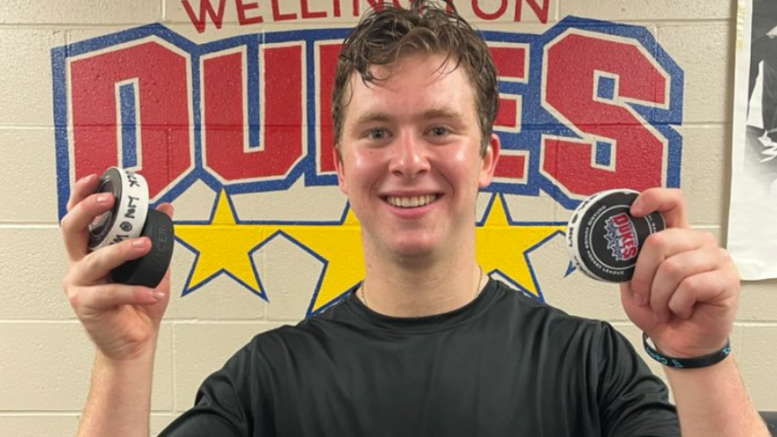 The club wound up skating away from the visiting Lindsay Muskies Friday night 7-4 in a contest that got more and more heated as the home opener wore on. The teams combined for 29 infractions.

On Saturday, the Dukes played their first road game of the season in Georgetown and found themselves behind a goal in the first minute of the contest.

Wellington would battle hard and lead 2-1 midway through the game but a pair of power play Georgetown goals ended up being the Dukes undoing in a 5-2 setback.

“We had a very strong start in the opener to get up 3-0 in the first but we became more undisciplined as the game wore on,”  Smith told the Gazette. “I think we came into the opening weekend too amped up and not exactly on the same page. It’s a good learning experience for us to illustrate how bad penalties can really take their toll.”

Special teams were the name of the game Friday night as the club welcomed back the Wellington faithful.

Edward Moskowitz would score on the powerplay to open the scoring 4:10 into the contest and then doubled Wellington’s lead with a nifty short handed effort at the 11:42 mark. 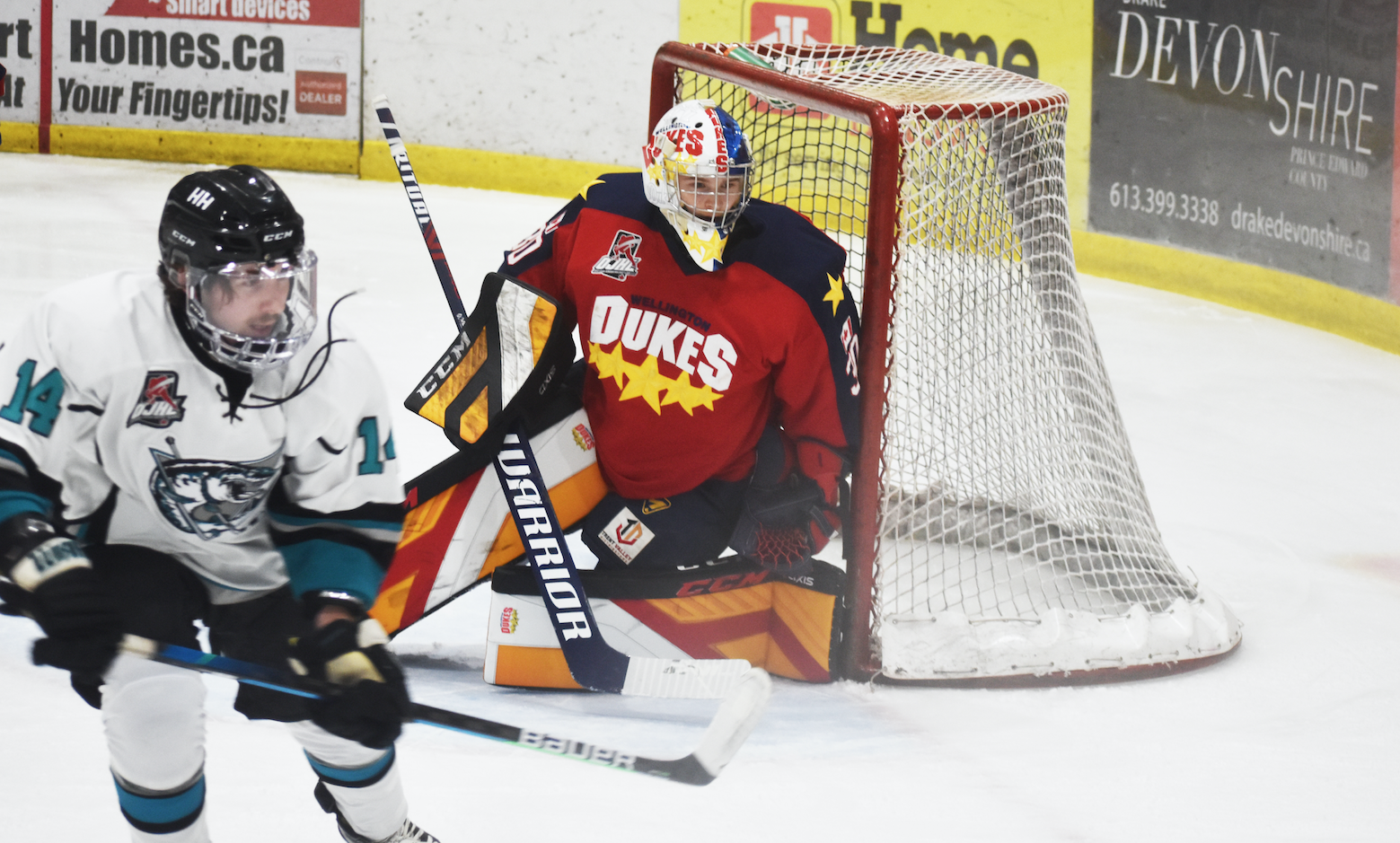 Just over five minutes later, David Campbell potted his first on the powerplay and Wellington was cruising until the last second of the stanza when Lindsay’s Taylor Barnett would score a power play goal of his one with one tick left on the score clock.

In the the second, Moskowitz capped off this hat trick effort with yet another man advantage marker at 8:43.

The game’s eventual game winning tally came at the 10:47 mark when Corbin Roach fired home his first of the season at 10:47.

Any momentum Wellington had was killed of the face off however as a tripping infraction was immediately whistled. Just seven seconds later, Lindsay’s Boyd Stahlbaum would have the Muskies second power play tally of the game to make it 5-2.

Former Sudbury Wolves forward Ryan Smith would pick up his third point of the game and first goal as a Duke at 12:54 as the points parade continued for Wellington.

But so did the conga line to the Dukes sin bin and Owen McNamara and Micheal Carter would score power play goals early in the third to get the Fish back into the game at 6-4.

The Dukes and Connor Hunt finally fired the dagger that boated the Muskies on what other than a power play at 10:36 to finalize the scoring at 7-4.

Wellington was 4-for-6 on the power play while Lindsay made good on four on their 13 man advantage opportunities. Ethan Morrow picked up the win for Wellington.

On Saturday afternoon, Wellington was the Mold Master Centre in Georgetown to take on a tough and fast skating Raiders club.

Noah Cochrane would give the hosts a boost in their home opener just 43 seconds into the game and Dukes starter Jacob Osborne was under fire early.

In the second, the Dukes got up on Raiders in quick succession. Jaxen Boyer picked up his first of the year off a Julien Jacob feed at 5:02 and then just over a minute later super sophomore Will Mitchell fired home his first of the campaign to stake the locals to a 2-1 advantage.

But just five seconds after a Wellington minor, the Raiders and Jack Guvenal would make the Dukes pay with a power play goal at the nine minute mark.

The Raiders would grab their second lead with a Brandon Kakei goal at 15:32.

Guvenal’s second power play tally with under five to go in the third would settle the contest in favour of the hosts and the Raiders added an empty netter to salt the game away at 5-2.

After scoring four power play goals in the previous game, Wellington came up dry on Saturday going 0-for-8.

“Playing 5-on-5, we like our game but with a compressed schedule and losing nine guys to OHL earlier this month, it feels like we haven’t quite gelled the way we normally would,” Smith said. “We will be putting the work in this week to get ready for Aurora and hopefully a good showing at Showcase next week.”

After welcoming the Tigers on Friday night, the Dukes will play Caledon on Monday afternoon and St. Mikes on Wednesday morning as part of the annual OJHL Governor’s Showcase event at the Cobourg Community Centre.