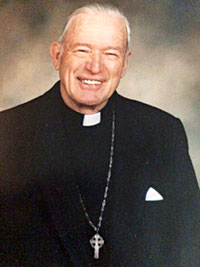 A County Pastor Dies
WHITEHOUSE, Rev. Canon John Stanley,
WWII Veteran
July 24, 1926 – Sept 03, 2022
At his home in Waupoos, and as he wished, “Father”/ “Padre” Stan, as he was commonly known, passed away peacefully with family at his side. Over the years he has emphasized that when his death took place he wanted no ceremony but that all essential arrangements be as simple as possible. He was very definite in his desire that no Funeral service or Celebration of Life ceremony be held to mark his passing. Therefore, in accordance with his wishes, he has been cremated with a private interment to follow in a family plot within the cemetery of Christ Church Anglican, Woodbridge. Father Stan was Rector of that parish at the time of his retirement in 1990. As a boy and later as a young man Stan grew up singing in the Choir of the Church of The Transfiguration, Toronto. His association with that church continued for some years as he was married and also ordained a Deacon there. In 1942, at the age of 16, Stan enlisted in the Reserve Army, training nights and weekends with the 2nd Battalion, 48th Highlanders. At age 17 he joined the Active Army with the Royal Canadian Engineers, becoming a photogrammetrist based in Halifax N.S. He later volunteered and was training for action in the Pacific when WWII ended in August 1945. Returning to civilian life, Stan accepted a call to the Anglican Ministry and completed his education at the University of Toronto and Wycliffe College. Following his ordination, he served as Priest and Rector of Anglican Churches in Selkirk and Winnipeg in Manitoba, later in Ottawa, Toronto and Woodbridge, Ontario. After his retirement Stan enjoyed continuing his Ministry as an associate Priest at St. Mary Magdalene, Picton as well as Christ Church, Glen Miller. Stan was the Padre for 60 yrs at various Legions ending at the Royal Canadian Legion branch #78, Picton, as well as Padre for the Air Force Wing Association. These associations and activities Father/Padre Stan enjoyed immensely! Stan was predeceased by his parents, John & Clarice, sister Ruth, wife June, children Steven, Karen and Patricia. He is survived by his son Edward, grandchildren, Lily, Ashley, Christopher, Julian and great grandchildren, brother Bruce & sister-in-law Heather and many nieces and nephews. Although Stan’s life was very active and dedicated to others he always tried to find time to be a devoted husband, father, brother and loyal friend. He will be dearly missed and fondly remembered by the hundreds of lives that he has touched over the years. Stan supported many charitable organizations.  If desired a donation to the charity of your choice in his memory would be appreciated by the family. Arrangements entrusted to the AINSWORTH FUNERAL HOME, 288 NOXON AVENUE, WELLINGTON. Online condolences may be shared at www.ainsworthfuneralhome.com