From the vantage point afforded my seven-year-old self at Fairfield Historic Park September 22, 1984, I knew there was some kind of commotion happening off in the distance but I’m not exactly sure I cared at the moment.

It was a grey and blustery Thursday afternoon and daily classes at South Marysburgh Central had been eschewed for a chance to catch a glimpse of royalty. Queen Elizabeth and Prince Phillip were making a stop in what was then known as Ernestown and now known as Amherstview to officially open the eastern gates of Highway 33 which would be known as Loyalist Parkway in honour of those early families loyal to the crown that sought refuge in this area starting in 1784. The tour celebrated that inaugural Loyalist landing as well as Ontario’s bicentennial. 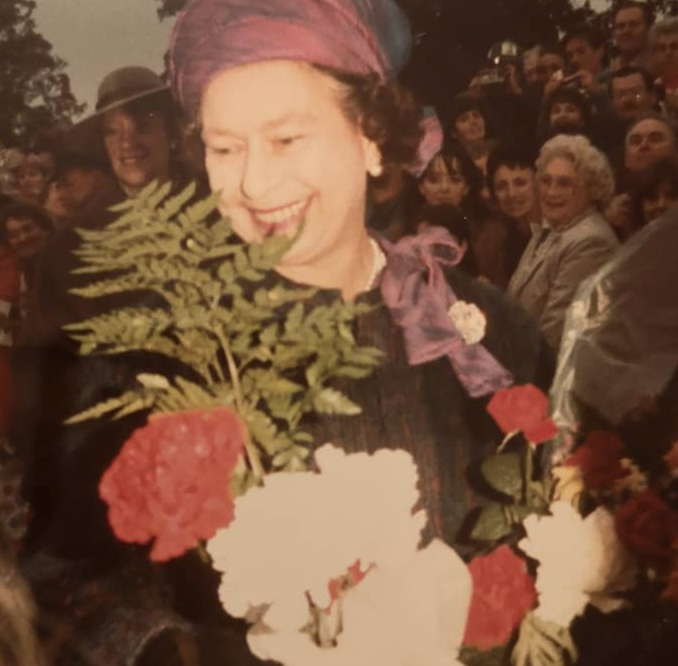 Queen Elizabeth during her visit to officially open the entrance to the Loyalist Parkway on Sept. 22, 1984. (Parks photo)

I had made some fast friends with some other farm kids and was playing tag when the Ernestown Secondary School Senior Concert Band under the direction of Glenn Sorenson struck up the music of her majesty’s anthem with The Parr Christie Singers providing the lyrics to God save the Queen.

In case your thinking even at seven-years-old your humble scribe was journaling the momentous moments of his life, a recently re-published article that appeared in the Napanee Beaver following the visit was added to our sister newspaper’s website at www.napaneebeaver.ca/2022/09/09/from-the-archives-a-look-back-at-queen-elizabeths-1984-royal-visit-to-lennox-and-addington and has helped refresh some key details.

Finally, after cutting the ribbon on the Lilly Inglis-designed gates, her Majesty made her way along a promenade lined with throngs of appreciative guests that included my own sister who held out a flower bouquet which, much to my sudden amazement and delight, the Queen daintily accepted, said very quietly “Thank you” through her gentle smile and twinkling eyes.

With daylight fading fast in the west, The Royal couple would board the HMY Britannia as the crowd joined in wave and song and, while hard evidence is difficult to obtain, the popular tale goes that a picnic lunch was served the next day during an unscheduled visit to Main Duck Island.

For a number of Canadians, particulary those that identify as monarchists and UEL descendants, the passing of Queen Elizabeth II, while not unexpected given her declining health, has tugged heart strings. From a personal standpoint, her reign was filled with triumph and tragedy. Canada’s grandmother as she was called offered quiet and reserved dignity and cohesion during the various Royal Family scandals and the death of Princess Diana.

However, to some Canadians and Indigenous People, the Queen and the monarchy symbolizes the horrors of colonialism and broken treaties. With a macro field of 1,000 years and hindsight at 20/20, it’s impossible not to view the British Empire’s involvement in colony building around the globe and disagree completely. Though the British Monarch’s actual impact on how Canada is governed has waned significantly, there is still the ceremonial aspect and it will forever be a part of our history.

As the world bids farewell to one of its more recognizable figures, it’s hoped King Charles III, who held a brief audience with Chief Donald R. Maracle at the Royal Visit in Wellington in 2017, will publicly recognize the colonial ills of the past in a new age of reconciliation that will breathe new life and perspective into Canada’s oldest institution. 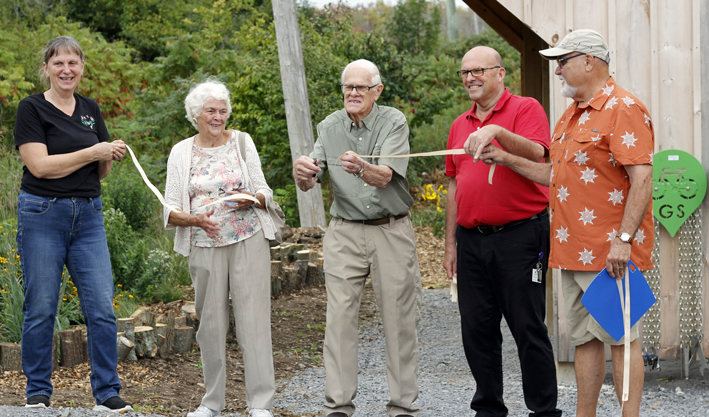 The Millenium Trail’s second rest area was officially opened on Monday. The shelter and information kiosk joins the Wellington stop as a place for cyclists, pedestrians and others to pause on their journey along the 46 km multi-use trail.
The new rest stop was supported, 100 per cent donor funded and volunteer built by members of the Prince Edward County Horticultural Society, the PEC Trails Committee, and County of Prince Edward Council. Present at the ribbon cutting were (from left) Lise Bois from the Horticultural Society, donors Maxine and Doug Thompson, Mayor Steve Ferguson and Trails Chair Patrick Maloney. (Desirée Decoste/Gazette Staff)