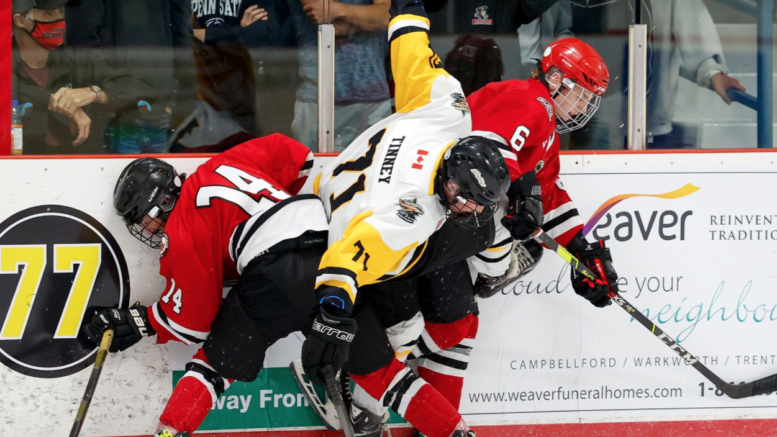 The Picton Pirates turned in an all-hands-on-deck type effort on Saturday night to pick up their first win of the 2022-23 Provincial Junior Hockey League regular season.

With just 15 skaters in the lineup, the locals had not shortage of offence as overage forward Jack Dow’s two third period goals and an outstanding debut by Picton net minder Brady Spry combined to tame the host Frankford Huskies 5-1. The Huskies home opener was opportunity for the second year club to remember the late Justin Crowe. The County native and Frankford player was lost tragically this summer in a motor vehicle accident near his home in Ameliasburgh. Both the Crowe family and the family of his girlfriend Sarah Bradbury took part in the ceremonial puck drop in which former Huskie and Pirates pick up Parker Mattis represented his new club.

The Pirates opened the scoring in the first when Cole Stevenson was able to elude the Frankford defence and spotted Ian Harrison near the goal at the 6:17 mark.

Without regular defenders Ryan Bauder, Trot Davis and Rheydan McCoy in the lineup due to injuries and suspensions, the Pirates went with a rookie-heavy lineup on the backend however Spry was spotless, making 17 stops in the frame.

In the second, Picton extended their lead was club captain Landon McLellan picked up an errant Frankford pass and deposited a short handed tally behind Huskies starter Keith Van Horne 5:51 into the second.

Late in the frame, affiliated call up Caleb Martin potted his first junior hockey goal, sending a puck into the Frankford net with just 60 seconds left in the second stanza.

In the third, Martin and McLellan would set up Dow at 12:11 to provide the patch eyes with a four goal spread.

Dylan Foster’s first of the season at 15:50 would deny Spry a shutout in his PJHL debut but the Pirates and Dow would answer with an empty netter one minute later to seal the scoring at 5-1.

Zack Brooks would feed Dow for his second on the night and the right winger ended up playing more than half the period on the blue line for Picton as Hunter Matthysse went down in the second with a leg injury.

The Pirates open the home portion of their 2022-23 schedule on Thursday night when they host the Amherstview Jets.