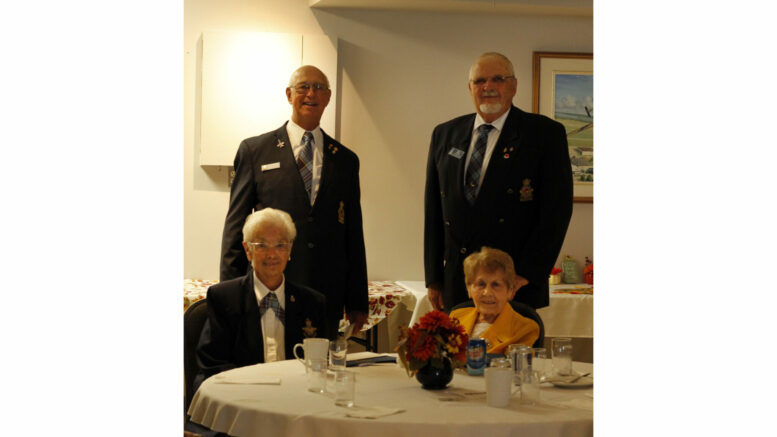 At the 87th anniversary of the Battle of Britain luncheon in Trenton on Tuesday, two 100-year-old ladies were awarded Honorary Life time Memberships to The Royal Canadian Airforce (RCAF) Association.

Dora Hockney, who use to live in Prince Edward County and Agnes Ward who resides in Trenton were the recipients of the award and both born in 1922.

Hockney was married to Group Captain (GC) Colonel William Arthur Hockney (Bill) on his return to Canada from serving with NO. 70 Squadron RAF Bomber Command in the Middle East 1941-1943. They were high school sweethearts.

On Bill’s retirement, the couple moved to Carrying Place. Hockney continued her desire for volunteer work by volunteering at the Trenton Memorial Hospital from 1975 through to 2019.

Her steadfast dedication to be involved saw her working initially in the hospitals Maternity Ward until its move to Belleville, then in the Day Surgery providing recovery assistance, and also worked the Hospital Gift Shop. Dora was a driving force as key member of the Trenton Memorial Hospital Auxiliary. The arrival of the COVID pandemic and a serious fall in 2019 forced her to accept that for personal safety and health.

“I’m so honoured indeed to be awarded an honorary Life Membership to The Royal Canadian Airforce Association. My husband was very proud of this wing and I’m glad to see that it’s still active. I did volunteer for 40 years at the Trenton hospital, the gift shop and day-surgery and I enjoyed it very, very much.”

Ward has been associated with the airforce from the time she came out of the service at the end of the war in 1946. Ward then joined National Defence in 1952 and traveled down to Trenton from Toronto where she worked for the next 30 years until she retired.

“I’m very proud, the airforce has been a part of my life. I was in the service during the war and its always been very close. I love Trenton, its close to the airforce and I love the wing, its the camaraderie format. When you see an ex-airforce person you connect right away and thats the nice thing about it.”

Ward’s life was shaped by the war, in tragic and also remarkable ways. We must never forget the contributions and sacrifices of women in wartime.

For more information on the RCAF Association please visit https://www.rcafassociation.ca/