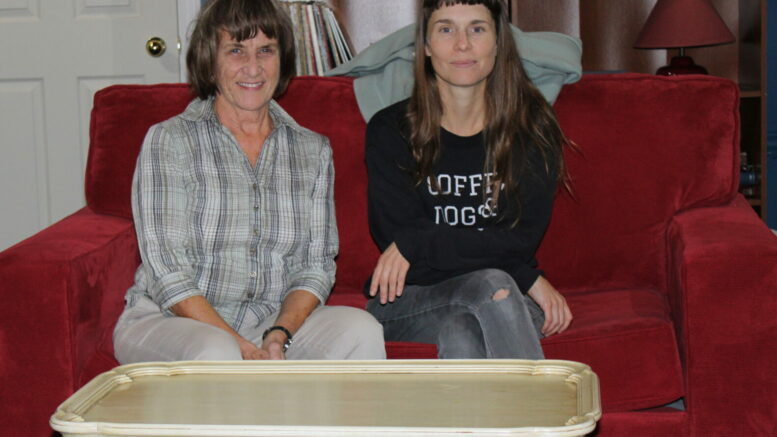 For the first time in three years, the County Roads Theatre Company will welcome the public to Mount Tabor Playhouse for their latest production Collected Stories, starring Joan McBride and Melissa Paulson. The play is directed by Fred Robinson.

Unlike most other theatrical productions, Collected Stories, has only two cast members. To talk about this and other aspects of the play, McBride and Paulson spoke with the Gazette from within the historic playhouse in Milford.

The play revolves around the relationship between aspiring writer, Lisa Morrison and her mentor, Ruth Steiner-the latter already being a published, successful author. Morrison, who has idolized her would-be-mentor, eventually becomes the writer’s assistant. However, tension arises when the student begins to match and even exceed the accomplishments of the mentor.

The play has been in the works for about a year, with last winter’s quarantine having put a stop to regular rehearsals. Nonetheless, the cast has been meeting regularly since April at the Parish Hall of St. Mary Magdalene Church in Picton.

“We’re very lucky because St. Mary Magdalene Church is one of our sponsors and they give us the parish hall for free to rehearse in, which is an amazing leg up. Small theatre companies like ours couldn’t afford to rent the space, so it’s a great gift. It allows us to get a good start on what is a rather complex play,” noted McBride.

“You’re on stage the whole time. That’s something that can be tedious. You need endurance, but you also have the time to really explore this character and follow their arch,” Paulson reflected.

McBride likened working with a two-cast play to having a best friend.

“It’s an adventure. You are never the same as you were last year, the following year, etc. When there’s just the two of us, we get to explore those intricate dynamics,” explained McBride. “It’s challenging, for sure, but there’s a wonderful sense of enjoyment and adventure.”

“This is what we love to do. We’re exploring and discovering and it’s a lot of fun,” Paulson added.

Unlike plays that boast a larger cast, a two-cast play requires both actors to be on stage at all times, allowing for a deeper exploration of the characters, commented McBride.

The script is so well- written, and the characters are so dynamic, we keep peeling back the layers,” McBride said. “That’s the kind of hard work an actor relishes, whereas a play with multiple characters…there’s only so much time to delve into those relationships.”

Both actors agreed a large amount of trust is required to be able to pull off an entire play without a large supporting cast.

“We have to trust each other and know whatever moment we’re in, we’ll be able to get through it. We’ll be energizing each other,” Paulson stated.

“There’s no dropping out, so to speak,” said McBride. “We rely on each other, and you’ve got to be staying in the moment and moving together form moment to moment. It’s very symbiotic.”

The intensity of the play is palpable. In speaking of the play, McBride notes the director has often said, during rehearsals, “oh, you so grabbed me!”

“I’m very excited. There are some apprehensions…as an actor, you always wonder, will I be able to do this again? For me, it’s a constant question,” stated Paulson. “Not having been able to be in a theatre in such a long time, not being able to be part of a cast took away a lot of pleasure in my life. I’m so excited to have an audience and to feel the energy bouncing off them again. We’re doing this to connect with stories and people.”

McBride described not only excitement but exhilaration at being able to be up on stage again.

“As theatre story tellers, there’s a cyclical energy we relish that happens when an audience comes to engage with us In this storytelling process. I’m exhilarated and feeling privileged we get to do this again,” said McBride.

Tickets are $35 at the door or can be purchased at Books and Company or online at countyroadstheatre.ca.