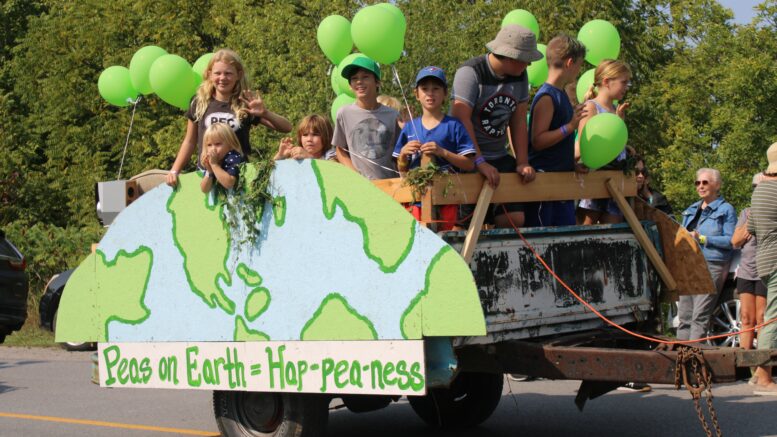 On Saturday, September 17th, the familiar sound of sirens and applause once again stirred members of the public as the 75th Milford Fair began with its customary parade. Since the mid-1940s, this small, country fair has been a staple of Prince Edward County life.

Notably, this is first year the fair has been held since 2019, just before the pandemic began. The long line up to get in was testament to the public’s fond remembrance of fair days gone by. Once the shriners, the O.PP. and the Cherry Valley Frasers, among many others, had loaded their floats into the Mount Tabor parking lot, the civic ceremony began.

Williams paid homage to the late Queen Elizabeth II, along with those who have served in the military.

“First, I want to let you know it’s legion week, we owe support to our legion who look after our veterans. It’s important we always remember those who served, those who will serve and those who served with the ultimate sacrifice,” said Williams. “Our Queen is gone and this week as we celebrate her legacy and mourn her passing, there will be many ceremonies including the one in England and Ottawa. Long live King Charles III as we move forward in his reign.”

“Thank you to organizers, volunteers and farmers,” he added.

Smith focused on the rich agricultural history celebrated at the fair.

“The sun always shines on the Milford Fair! Thanks to everyone who’s worked so hard to make sure this fair continues to be a success in our community. It takes a lot of work to make an event like this happen in our community,” said Smith. “It’s great to pay tribute and say thanks to those who work so hard in our fields. We have a rich agricultural history and present in Prince Edward County.  It’s great to be able to get together as a community and celebrate that. Thank goodness we’re moving out of Covid-19 and we can get together and celebrate in person again. It’s great to see all the smiling faces.” “I don’t know how many were here when the fair started in 1945,” said Ferguson. “It originally was to recognize the soldiers coming home. I’d also like to recognize the legion and all the soldiers who have served so valiantly. 75 years later here we are, gathering under sunshine, celebrating being together and coming out of the Covid-19 pandemic. It’s wonderful to see everybody full faced as opposed to from the bridge of the nose up. It’s a fantastic time to be together. Thank you to the organizers, fair board and everyone who had a hand in putting this together.”

After working for several months with the fair board, Hirsch expressed excitement at the large number of fair goers. He also mentioned the board had been worried that, after a two- year hiatus, the fair would not prove to be popular.

“Look at you all. It’s fantastic. We have a tremendous turnout!” beamed Hirsch.

In attendance at the 2022 Milford Fair were the children of Ben Begbie-an inaugural member of the fair board.one of the inaugural fair’s board members.

They were, reportedly, thrilled to take part in this year’s festivities and recognize the significant contributions their father made 75 years ago to make the Milford Fair a reality.