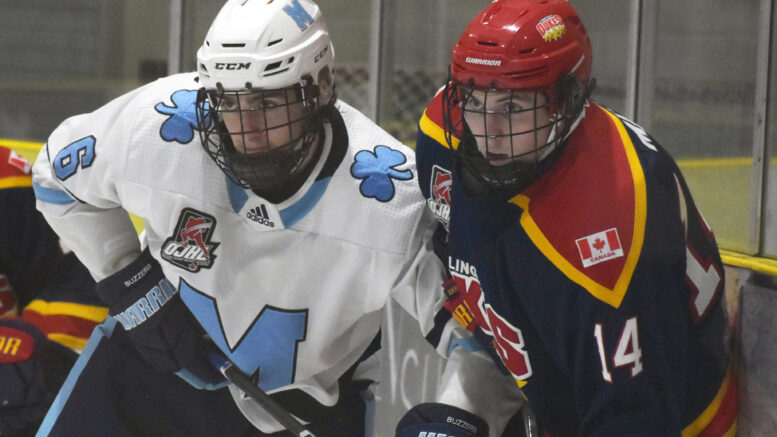 The Wellington Dukes are happy to see the St. Micheal’s and more specifically Buzzers goaltender Jacob Gorinsky head down the 401 back to the Big Smoke after Friday night’s home contest.

The Dukes were able to salvage a split of this quasi-home and home set against the team from St. Michael’s College in downtown Toronto with a 3-2 win Friday but Gorinsky didn’t make it easy for the locals, making 41 stops in a losing effort.

Scoreless through the first inning, it was the Buzzers getting a lead at the halfway mark of the second when Luke Perovic’s off speed volley from the high slot tumbled into the Wellington net behind starter Jacob Osborne at 10:43.

Wellington, who held a better than 2-1 shot advantage, maintained pressure on the Buzzers and were rewarded a couple of minutes later then Ryan Smith’s home run pass was collected by captain Jacob Vreugdenhil.

The Wellington pivot darted from the blue line and successfully picked the five hole on Gorinsky at 13:41 to tie the game.

The Dukes would claim their first lead over the Buzzers at 13:55 when Jaxen Boyer’s effort clanked off the near post to the right of Gorinsky to provide the hosts a 2-1 margin after 40 minutes.

In the third, Smith would have the solution for Wellington at 5:01 as his power play effort sailed into the Buzzers cage to make it 3-1 Dukes.

Perovic’s second of the game at 9:28 of the third made for a exciting finish but the Dukes and Osborne kept the visitors at bay down the stretch, and denied St. Mike’s their second win of the campaign.

There may have been some added determination from the home side as it was the Buzzers winning their first win on Wednesday morning at the 2022 OJHL Governor’s Showcase in Cobourg.

As they did in the subsequent contest, the Dukes fired 40 plus shots at Gorinsky but only had a single tally to show for their efforts.

Smith and David Campbell would set up Luke LaPalm at the right hand face-off circle  with exactly one minute left in the first to push Wellington ahead 1-0.

St. Mike’s would get the only goal in the second as Perovic and Giacomo Martino set up former Georgetown Raider Bryce Sutherland at the 13:10 mark to square the affair at 1-1 through 40.

In the third, it was Buzzers rookie Nathan Degazio nothing his first OJHL goal part way through the third and the tally would stand up as the winning marker.

The Buzzers would tack on an empty netter off the stick of Martino with just under 90 seconds left into the contest.

Gorinsky made 42 stops in picking his and his club’s first win of the year.

Wellington has a rare Friday night off this week but will be in action on Saturday afternoon when they travel to Haliburton for the first time in 2022-23.

On Sunday, the Dukes will host the Burlington cougars at 3 p.m.