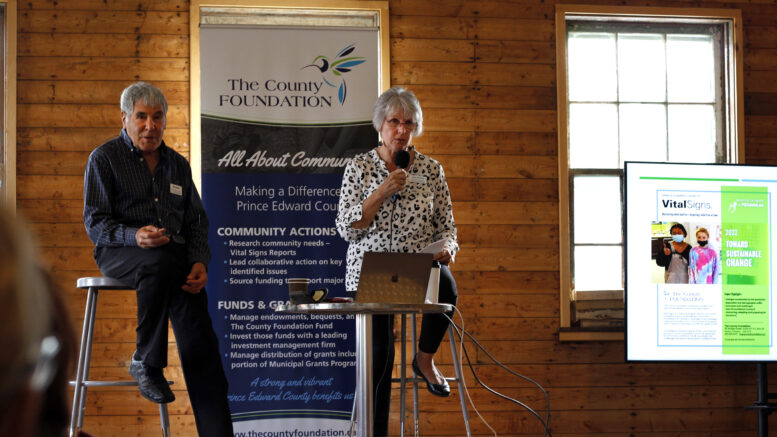 In honour of the release of the latest Vital Signs Report, The County Foundation invited members of the public for a presentation on the report’s findings held at Base 31. Vital Signs is a national program, led by community foundations and coordinated by Community Foundations of Canada to leverage local knowledge, measure the vitality of communities and support action towards improving the collective quality of life.

As per the report, this evidence-based snapshot of the community is intended to promote awareness of community conditions, trends, successes and challenges and what is being done to address them.

Navigating the effects of the pandemic is a strong theme throughout the report that serves as a follow-up to the 2021 Covid-19 Impact Report. As noted in the report, there is more to be gained by being aspirational than returning to a status quo that did not necessarily work for many people in the community or the environment.

At the time the 2022 report was penned, not all the 2021 census data had been released, including BIPOC population and adult education levels. There are plans to include these in the 2023 Vital Signs progress report.

Brian Beiles, President of The County Foundation, spoke to the significance of the 2022 report and the purpose of the Vital Signs Report in general.

“This is our first report since 2013. It provides a snapshot and trends of the most critical issues affecting our community as well as what has been done to address them. It’s a national program conducted by community foundations,” Beiles explained. “In the past, Vital Signs Reports have sparked community discussion, inspired collaborative community actions and informed decision making by community leaders. We hope this one will follow suit.”

Highlights from the report include:

For the report, data was drawn from quantitative and qualitative primary and secondary sources. And, as per Beiles, statistical data was gathered form a variety of sources at the national, provincial and municipal levels, as well as community and regional organizations.

Importantly, Vital Signs has morphed from a periodical report to providing annual progress reports starting this year. There is also now an online data bank available.

Beiles is careful to note, the report and collected data has real world implications, informing several projects in the community.

“Vital signs data has been applied to several community projects, for example the Community Safety and Wellbeing Plan,” he said.

While the printed report in 2022 is condensed compared to previous reports, there are links to extensive details in the online data bank.

In his speech, Beiles pointed to two themes that emerged from the most recent report. These are: 1) changes accelerated by the pandemic and 2) how Prince Edward County is recovering, adapting and preparing for the future.

“These changes have the potential to dramatically alter our community for better and, in some cases, for worse. We can either be reactive to these changes or proactive and help to steer our future in a desired direction,” Beiles stated.

Explaining some of the data found within the report was Anne Van Vlack, Vital Signs Coordinator at The County Foundation.

“There have been some unexpected changes with the trends in the sense that they’re not ones that have been projected and were largely caused by pandemic,” said Van Vlack. “Since the 2016 census, the county’s permanent population increased almost 4 per cent. That’s a positive trend after about a decade of population decline, but the pace of growth is projected to pick up speed over the next five years based on the projected housing starts. As well, the number of seasonal residents is growing, with over 7,000 seasonal residents.”

Other points mentioned by Van Vlack include the county’s aging population, with the median age being 56.8, as opposed to the provincial average age of 41.6.

Other key figures presented in the report that point to population growth include a large waitlist at the Hub Child and Family Centre-the only licensed daycare centre in the county. According to the report, there has been a 54 per cent increase in registration at the Hub since the start of the pandemic, with a waitlist of 155 children.

According to data from the municipal Development Services Department, housing starts are projected to grow by 300 per cent in the next five years (compared to the past six years).

While there is considerable development on the horizon, not all housing is equal, with the County experiencing an affordable housing crisis. In fact, the median house price in the county is 25 per cent higher than our neighbouring communities of Belleville and Quinte West.

As per the report, the trend of second-home buyers, retirees and investors scooping up affordable housing accelerated during the pandemic. In fact, 16.4 per cent of the housing inventory may be used as vacation rentals or second homes. The provincial average, along with that of Toronto, is 7.4 per cent.

Unfortunately, the increase in housing prices has put pressure on the rental market with a 19.5 per cent market increase in rent since 2020, according to the report. The rental vacancy rate is currently at 0.2 per cent.

Speaking to the housing crisis and, importantly, what is being done about it, was Charles Dowdall Executive Director of the Prince Edward County Affordable Housing Corporation (PECAHC). 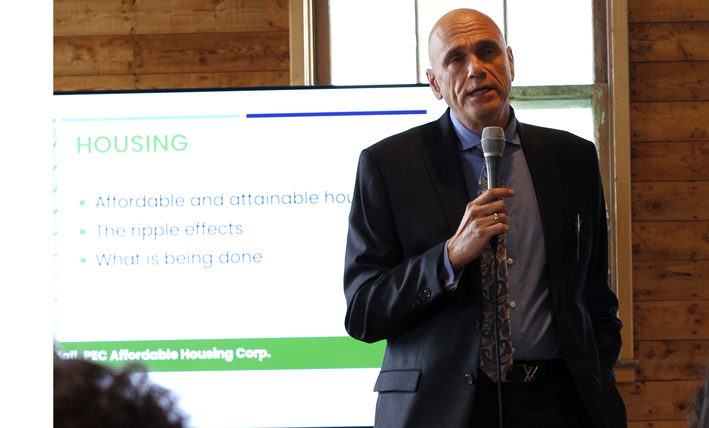 Dowdall added there are a couple properties, such as Queen Elizabeth Public School, which is in the due diligence stage of being developed into affordable housing, and H.J. McFarland Home, which could deliver between 500-1000 units.

“We’re on a very aggressive schedule, but it’s a good news story. I want people to understand we’re not only committed but working very hard to alleviate and deal with this crisis,” Dowdall stated.

Also speaking to the crowd was Sarah Michel, Youth Inclusion Program Worker at the Roc. Michel presented the needs of youth, many of whom have faced not only personal challenges, but also societal challenges due to the pandemic.

“Youth want the opportunity to choose a place to call home. They have been exposed to an unpredictable world where they’ve lost hope and the homes they’ve grown up in are being pulled out from underneath them,” Michel began. “Regardless of their parent’s situation, or whether they leave for different employment, county youth desire the ability to find or keep a home here. As a community, we should be listening to that.”

Michel also spoke to the need youth have expressed for caregivers to have the skills and resources to converse about issues impacting many youth today.

“They hope to see more resources for the adults who are raising them to be able to have difficult conversations. If they’re struggling with self-harm, addiction, or if they’re transitioning, youth seek the ability to speak with their guardians about these circumstances,” said Michel. “Lastly, youth wish for adults to focus and support them on immediate successes rather than focusing primarily on their future. A lot of youth are struggling, which can be attributed to anxiety caused by isolation from the pandemic.”

To view the 2022 Vital Signs Report, or for more information about the County Foundation, please visit: https://thecountyfoundation.ca/vital-signs/