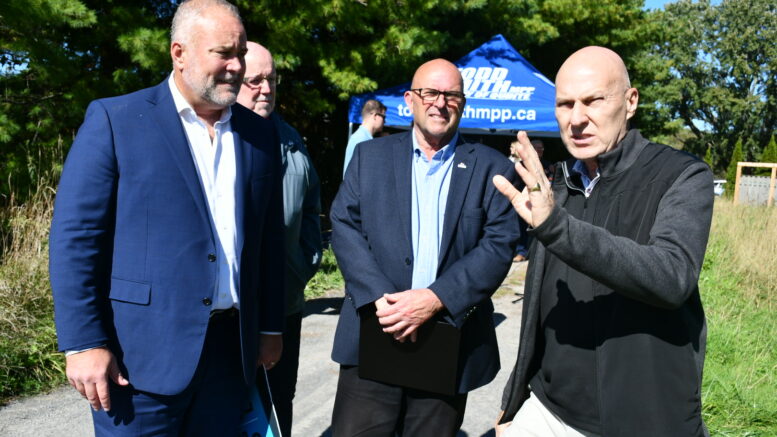 A new school in a developing part of Picton and an opportunity to develop the former Queen Elizabeth School site into affordable housing are all part and parcel of an announcement made by Bay of Quinte MPP Todd Smith on Thursday.

Smith announced the province has provided the Algonquin and Lakeshore Catholic District School Board (ALCDSB) $4.6 million in Land Priorities funding to purchase a property on Talbot St. in anticipation of the construction of a new replacement St. Gregory Catholic Elementary School.

ALCDSB was awarded $8.7 million through the ministry’s 2019-2020 Capital Priorities program to construct a new 354-pupil Junior Kindergarten-to-Grade 8 school to address pupil accommodation requirements. The current St. Gregory school site is 2.2 acres and is unable to accommodate further expansion to the existing facility. The new site to be acquired will be in  north west end of Picton where considerable new home development has been planned and initiated.

“I’m pleased to see that our government is working with the Algonquin and Lakeshore Catholic District School Board and municipal officials in Prince Edward County to ensure students and staff benefit from modern learning spaces in this new facility close to new population growth,” said Smith.

ALCDSB officials were thrilled with the announcement.

“On behalf of the Algonquin and Lakeshore Catholic District School Board and the St. Gregory Catholic School community, I would like to thank the Ministry of Education and MPP Smith for their support in the approval of this capital priority as articulated in our multi-year strategic plan, which is a brand-new 354 pupil place school at 175 Talbot Street in Picton,” said David DeSantis, Director of Education.
Added board chair Tom Dall: “We thank the Province for their productive collaboration and significant investment in our faith-filled Catholic learning communities.”
The acquisition of a new site in Picton could also help Prince Edward County in pursuing one of its strategic objectives.

Following the Hastings and Prince Edward District School Board (HPEDSB) decision
to close Queen Elizabeth Public School in 2018, the board declared its Barker Street property surplus. Both the ALCDSB and Prince Edward County expressed interest in acquiring the school through the Ontario Reg. 444/98 dispersal process, with the catholic school board higher on the priority list.

Following fruitful discussions between the boards, the municipality and Smith, the ALCDSB elected to pursue a new site and requested site acquisition approval and funding from the Province. Previous offers for the property were allowed to lapse and the HPEDSB restarted the dispersal process Monday.

County of Prince Edward Mayor Steve Ferguson has indicated the municipality plans to pursue the property. He expressed gratitude for the school and site funding, as well as the opportunity arising.

“We welcome today’s announcement by the Government of Ontario. Strong, thriving and modern
education institutions are critical for the long-term health and well-being of our community,” said Ferguson. “And, with a new location for the school identified, we look forward to the possibility of acquiring and redeveloping the former Queen Elizabeth School property to support affordable and attainable housing in our community.

Smith is encouraged about the possibilities.

“The addition of more housing – including affordable units – remains a top priority for our government. I’m pleased the collaborative approach to site selection for this school could provide new opportunities within the municipality to achieve this objective,” said Smith.