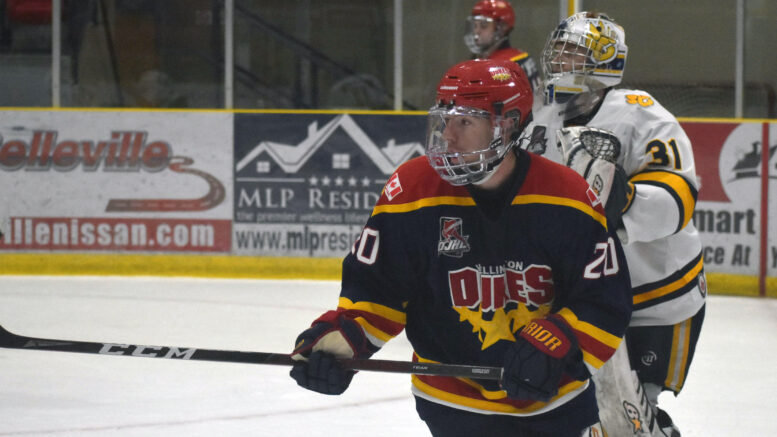 With four of their next five games in the comfy confines of Lehigh Arena, the Wellington Dukes will hopefully turn to some home cooking to fix what ails them.

After remaining idle on Friday night, the locals dropped a pair of contests over the weekend. On Saturday in Haliburton, the host Huskies took a bite of out of the visitors, skating away with a 4-2 win.

Just under 24 hours later, the Dukes hosted the Burlington Cougars with the Mark Jooris-coached club scoring two goals late in the second period to provide the visitors a lead they would not relinquish in a 5-4 game.

With the back-to-back losses, Wellington’s record on the 2022-23 Ontario Junior Hockey League fell to 4-4-0.

On Saturday, Wellington and Haliburton played to a scoreless draw through 20 minutes and it was after the midway point of the game before either goalie flinched.

Finally, at the 12:57 mark, Patrick Saini scored off a Christian Stevens set up to stake the hosts to a 1-0 lead.

Later in the frame, Josh Sordo’s power play marker at 16:23 doubled the Haliburton lead at 2-0.

In the third David Campbell’s power play tally at 6:22 found a home in the back of the net behind Tyler Hodges to give the Dukes some life but Ty Collins’s effort just over two minutes later was the dagger Wellington couldn’t overcome.

Lucas Lapalm would get the Dukes back to within a goal at 13:03 but Steven’s fired home an emptier netter after Wellington starter Ethan Morrow had been lifted for an. Extra attacker at the 18:42 mark.

On Sunday, Wellington went with Jacob Osbourne in net but the Dukes didn’t favour any better in a back-and-forth affair.

The teams traded goals in the first with Joel Chauvin breaking the ice for the Cougars at 4:58 and Wellington’s Corbin Roach responding on the power play at 10:24 off a nice Connor Hunt pass.

The Dukes would bag another man advantage marker early in the second when Julien Jacob’s point shot got past Zach Dietz, brother of Wellington defence man Jacob Dietz.

Hunt’s third of the season just under four minutes later seemed to indicate Wellington was on its way to a win but Burlington had other things in mind.

Conner Thomson-Dick brought the Cougars to within one at 6:55 and the set up Thomas Lenart at 15:18 on the power play to tie the game up 3-3.

Just over a minute later, the Cougars reclaimed the lead and would never look back as Jamie Langill’s goal at 16:27 make it 4-3 for the visitors.

Thomson-Dick’s second of the game early in the third made it 5-3 and the insurance was needed as Jacob Vreugdenhil’s fifth of the season got the hosts to within a goal.

Wellington hosts the Toronto Patriots on Friday night and then travels to Mississauga on Saturday.