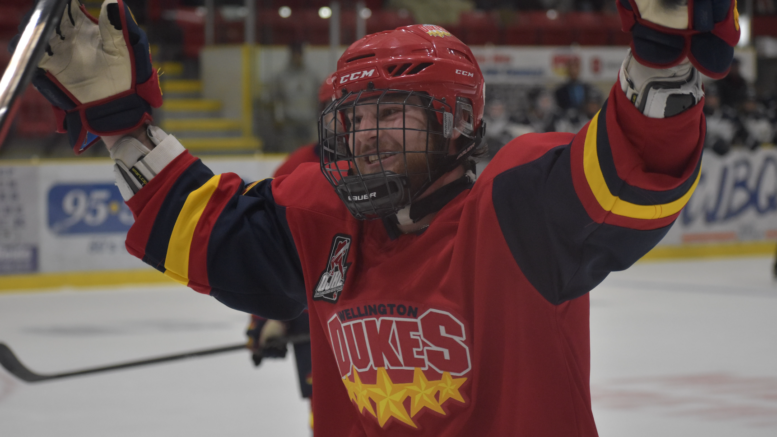 Nate Woods was a happy skater Friday as he scored his first two OJHL goals in an 11-3 win over visiting Toronto. (Jason Parks/Gazette Staff)

There’s an old sports adage about winning in a blow out one game and then struggling to score in the next.

“Should’ve saved some goals for the next game” is generally the line.

Well, the Wellington Dukes (6-4 can be thankful this weekend they saved just enough offence in an 11-3 pasting of the Toronto Patriots on Friday night to escape venerable Port Credit Arena and the clutches of the Mississauga Chargers with a 2-1 double overtime win on Saturday.

Typically one of the Ontario Junior Hockey League’s weaker squads, coach Joe Washkurak and his squad came to play against Wellington after both sides were in action the night before.

Chargers netminder Braeden Shaikh and Wellington’s Jacob Osborne were both fantastic in the contest.

After Osborne gave up a late first period goal to Mississauga shooter Steven Li, the Gloucester, ON native was dynamite, making 49 stops. In the far end of the arena, Shaikh tried to make Li’s effort stand up as a winner.

Finally, with the hour getting late, Wellington’s Ed Moskowitz fired home a nifty unassisted effort with just over six minutes left in the game to make it 1-1.

After a scoreless 4-on-4 five minute overtime period, the teams would have gone to a 3-on-3 session if not for a minor penalty to Mississauga’s Michael De Sousa.

The Dukes, with a 4-on-3 advantage, worked the puck around the Charger zone until Julien Jacob had time and space to rip home the winner 44 seconds into the second overtime. Jacob Vreugdenhil and David Campbell had helpers on the game’s final play.

A night prior at Lehigh Arena, the mood was not nearly as tense as the Dukes found the area behind the Pats goal line early and often for Wellington’s best offensive outing of the young OJHL campaign.

If there was a design this wasn’t going to be Wellington’s night, that was scrapped after the first where the Dukes counted for three of their four power play goals of the evening.

Luke Lapalm would count for three goals and his first hat trick in a Dukes uniform with two man advantage tallies in the opening stanza. Moskowitz also scored on the man advantage while Corbin Roach had an even strength goal. After the Pats and Joe Colangelo potted a goal early in the second, the Wellington offensive parade continued in the second.

Moskowitz turned in a nifty effort for a shorthanded marker at 6:35 to make it 5-1, popping the water bottle of the Toronto net for good measure with a blistering snap shot. Jaxen Boyer chased Pats starter Chris Quizi just over 4:30 later but reliever Aidan Amidovski had a rude welcoming into the contest, giving up goals to a pair of former Picton Pirates in Nate Woods and Jacob Dietz before the end of the frame.

If there was a hiccup in Wellington’s game, it was the start of the third where the locals and starter Ethan Morrow looked a little pedestrian in the opening ten minutes of the final frame.

Ashton Miwa and Ryan Nichols would score to get the game to 8-3 but the Dukes put the gas pedal through the floor in the back end of the period.

Vreugdenhil would answer at 10:50 and then Woods followed up his first OJHL tally with his second at 17:10 and the Lapalm fired home his hat trick goal just a dozen seconds afterwards.

Morrow made 27 saves in the win.

The Dukes are home this weekend, welcoming Haliburton on Friday night before hosting St. Mikes on Sunday afternoon.