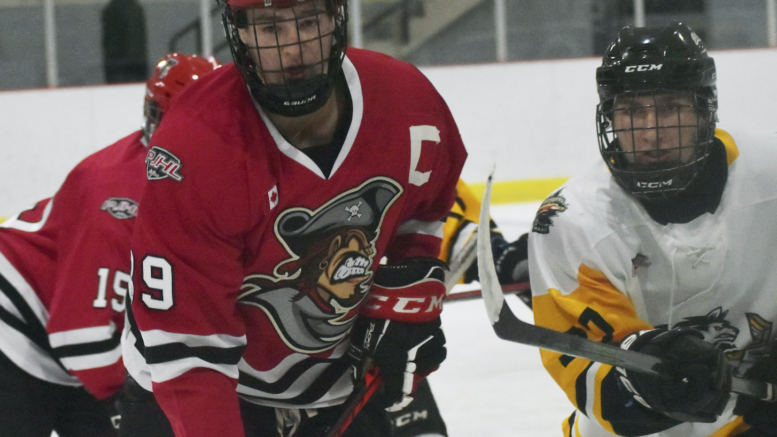 The Picton Pirates started the month of October in fine fashion, sweeping the Frankford Huskies in a home-and-home set to push the Patcheyes back over the .500 mark.

On Thursday at home, Pirates production was paced by team captain Landon McLellan who registered a hat trick in an 8-4 doubling of the visitors.

On Saturday in Frankford, McLellan again found the range but so did four other Picton shooters in a 5-2 win.

On Thursday, the Pirates got rolling at the halfway mark of the first frame as Ryan Bauder went bar down on the power play at 12:27 to sake the locals to the game’s first lead.

At 16:35 Parker Stewart snapped home a goal off a mad scramble in front of the Picton net to tie the game the Pirates had a dagger late as McLellan spotted Kirby near the Huskies net and the Consecon native made a nice play to go backhand-forehand in traffic and lift a puck past Frankford starter Keith Van Horne with eight seconds left on the clock.

The second stanza was one of the most eventful periods of the young season for either team as both managed to tally thrice.

Kieran Ellis made a nice deke in the slot to go backhand over Spry at 3:30 and then Carter Musclow’s point shot through traffic on the powerplay gave Frankford their first lead of the game.

At 8:32, Picton managed to get back on even footing as defence man Tyler Balkwill made a dash into the offensive zone and wound up finding Napanee native Zach Slaven in the slot for his first PJHL goal.

Jacob Tinney would untie the contest just over a minute later but the Pirates had designs on finishing strong at the end of the second.

At the 15:05 mark, Spry had a quick up to Rheydan McCoy who found veteran Jack Dow bursting into the Huskies end. Dow made a nice move to get into a shooting position and the Wallbridge native beat Van Horne to square the affair at 4-4.

Then, inside the last minute of a period for the second straight time, the Pirates would strike and it was Bauder and Dow setting up McLellan with 52 seconds left to give Picton their first lead since the third minute of the frame.

In the third, it was all Picton.

With his third assist of the game, McLellan set up Kirby for the second time, this time during  4-on-4 play when the captain led the rush and then found Kirby cruising in the slot area at 4:28.

McLellan bagged his second of the game off a nice cross ice feed from McCoy at 9:10 than then capped off a hat trick effort at 18:11, sending the puck from the Picton side of centre into a vacated Frankford net to make the final 8-4.

On Saturday in Frankford, the locals managed to put together a nice second period and then rode the goaltending of Spry in the third to the club’s third win of the season.

Frankford’s Phoenix Smith would put the hosts up 1-0 at 3:02 but Liam Philip’s first PJHL tally just 32 seconds later hade the game tied at 1-1.

Partway through the first, McLellan’s sixth of the campaign with helpers going to McCoy and Dow on the power play gave the Pirates their first lead of the night at 2-1.

The Huskies tied it up late with Carrying Place’s Jakob Gardner setting up Jacob Tinney with under two minutes to play in the first.

In the second, Picton pushed forward thanks to sophomore Cole Stevenson.

Ahead 4-2 after 40 minutes, Picton would face a barrage of Frankford volleys in the third but Spry was more than equal to the task, stopping all 20 shots sent his way.

In the late stages and with the Van Horne pulled for the extra Huskies attacker, Picton’s Ian Harrison would fire home his third of the season at 16:45 to salt the game away for the Pirates.

With the 2022-23 PJHL regular season now extended into early March, the Pirates will have some dark Thursday night at Huff Estates Arena, this week being one of them.

Picton will travel to Campbellford for the Rebels home opener on Saturday, Oct. 15. Picton’s next home action is Thursday, Oct. 20 when the Bucs meet the Port Hope Panthers for the first time this season.