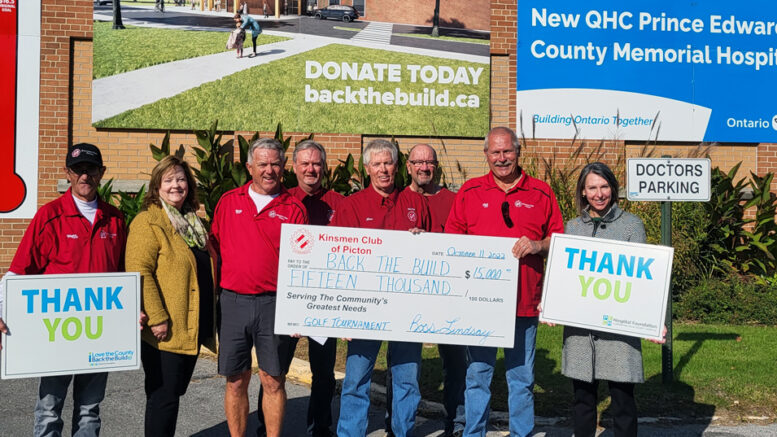 The Kinsmen Club of Picton has scored a hole-in-one for the Prince Edward County Memorial Hospital Foundation’s (PECMHF) Back the Build campaign.

After a two-year hiatus due to COVID-19, the Kinsmen Club’s 2022 golf tournament came back stronger than ever uniting 96 golfers, who demonstrated their community spirit, generosity and commitment to philanthropic causes in The County, including equipping the new hospital.

The sold out tournament on June 23, 2022 raised $15,000 for major equipment purchases needed for the new hospital. This is the first year the Kinsmen Club of Picton has designated a portion of the proceeds from their annual tournament to help build the new hospital in Prince Edward County (PEC).

“Fundraising activities like this tournament, helps the foundation reach our goal of equipping our new hospital in Prince Edward County,” said Shannon Coull, executive director of the PECMH Foundation.

“The Kinsmen’s gift today will also go towards smart technology initiatives and environmental sustainability enhancements that are being considered for the new hospital. The ongoing support from all of our local service clubs is another excellent example of the collaborative effort underway across Prince Edward County to help get our new, leading edge hospital built.”

PECMHF raises money to advance health care for the patients of the hospital and the people of Prince Edward County and is raising $6M over the next five years to equip Prince Edward County’s new hospital with major medical equipment devices like a Computerized Tomography (CT) Scanner, Digital Mammography Equipment, and a new Digital Radiography Machine. These funds are part of the foundation’s $27M Back the Build Campaign.

“We are privileged to be in a position to make this gift that will purchase equipment for The County’s new hospital. When complete, our new hospital will be a foundational benefit and lasting legacy to future generations and improve the health and lives of everyone in our community.” said Terry DeRoche co-chairperson of the Kinsmen Club of Picton’s golf committee.

The Picton Kinsmen Club are a group of 23 members who raise funds through many events throughout the year including their Thursday night bingo and their annual golf tournament. Over the past five years, the Kinsmen have invested over $100,000 into the PEC community and are proud to state that 90 per cent of the funds they raise stays in The County.

“We are tremendously grateful to our very generous donors, sponsors, golf committee members, board members and the numerous volunteers who helped to make the day inspiring and memorable,” said Gary Davidson, co-chairperson of the Picton Kinsmen Club’s golf committee. “The tournament is a fun time and always creates a generous atmosphere.”

The Kinsmen Club of Picton would like to thank everyone who made the golf tournament possible. For more information on the Kinsmen visit http://www.pictonkinsmen.ca/. Plans are well underway for Prince Edward County’s new hospital, a 96Ksqft facility with 20 in-patient beds. The new hospital will have leading edge infection control and ventilation, wider halls for modern medical equipment, and larger patient rooms. More information can be found by visiting www.backthebuild.ca.