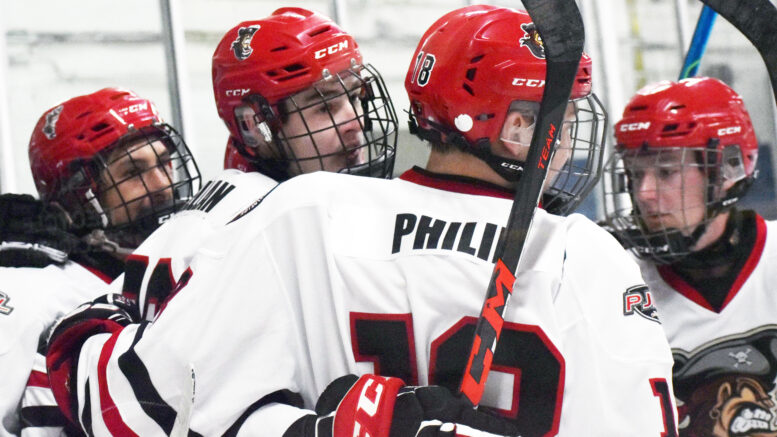 The Picton Pirates fired an eight goal barrage on Saturday night in Campbellford, spoiling the Rebels home opener and earning the locals their fourth win of the Provincial Junior Hockey League campaign.

While the game’s final score of 8-2 indicates that Pirates were cruising in the contest, the game’s outcome was still in doubt midway through the third period as penalty trouble kept Picton from pulling away. Picton Pirates blueliner Rheydan McCoy had a goal and an assist in Saturday’s win. (Gazette Staff)

Picton managed to get ahead by a score of 4-0 through the first 22 minutes of the game.

Liam Philip fired home his second of the season 83 seconds into the game. Later in the frame, Zack Brooks had his first of the year at 11:09 and then Rheydan McCoy ripped a power play goal with 55 seconds left in the opening stanza.

Early in the second, Picton was at it again as Philip fed captain Landon McLellan who put a nice move on Rebels starter Ethan Koren to put the Pirates up 4-0.

Campbellford battled back at the 6:58 mark when Brock Kelsh deposited a puck into the Picton net during a Rebels power play to put the hosts on the board.

Ahead 4-1, the Pirates had plenty of power play time in the last half of the second period but were unable to pad their lead.

As is often the case in junior hockey, a steady stream to the sin bin by one team is often reciprocated and the Pirates would find themselves down two skaters for a full four minutes to start the third period.

Early in the third as Picton’s penalty killing was measuring up to the Campbellford onslaught, McCoy was whistled for a phantom interference call that left the local’s penalty box packed with Pirates for extended period of time. Finally, Campbellford captain Aiden Treverton’s volley through a maze of bodies beat Spry to make the score 4-2 and the Rebels were on the hunt for more with the Pirates still down man power.

But Picton’s ability to ‘Rely on Spry’ in the minutes following the Rebels tally proved to be enough to get the Pirates back to even and within moments of getting back to 5-on-5, McCoy was able to spring Philip on a breakaway and the Picton native put the game to bed with his second of the game at 8:07.

The Pirates then pulled away as McLellan set up Jack Dow for a power play tally at 11:02.

Just over a minute later, Ian Harrison was the benefactor of Ross Maycock’s nice rush into the Rebels end as “Harry” picked up a nice pass just inside the blue line and found the back of the Campbellford net at 12:10.

In the final minute, Picton’s Kleighton Grove showed off some tremendous foot speed, collecting a Tyler Brady pass and bursting in on Koren unscathed, slipping a back hand effort into the top of the Rebels net to finalize the score at 8-2.

With a goal and three helpers, McLellan kept up his torrid scoring pace with 15 points in just half a dozen games.

Spry made 36 saves for his fourth win of the year.

Prior to the game, the Pirates made a deal with the Pickering Panthers of the Provincial Junior Hockey League, adding goaltender Ethan Beattie to the roster. Playing for the Ajax/Pickering Raiders last season, Beattie had a 1.14 Goals Against Average in 14 games in the Eastern AAA League. Prior to playing in Pickering, the Whitby native starred in the Quinte Red Devils organization for several seasons.