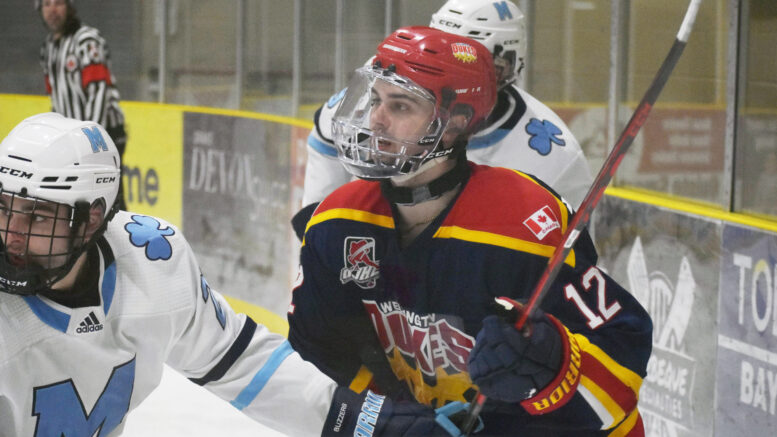 The Wellington Dukes and their faithful can be excused if they woke up Monday morning and looked at their calendar, wondering if they hadn’t somehow been cosmically transported to the third Sunday in June.

In an era where such an outcome in hockey is almost as rare as a unicorn or a game where opposing teams agree the officiating was above par, the Wellington Dukes picked up a pair of ties this weekend to move their record to 6-4-2.

In both cases, Wellington had to play comeback to salvage a point against the opposition-teams that are strangely going in opposite directions in the Ontario Junior Hockey League’s South East Conference.

On Friday night, the Dukes were probably pretty pleased with playing the visiting Haliburton Huskies to a 4-4 draw with the hosts grabbing a goal late in the third to force a pair of scoreless overtime periods against the second best team in the loop.

But on Sunday Wellington was buzzed by the sub-.500 St. Mike’s Buzzers, a club that’s played Wellington very tough this season but hasn’t exactly run through the rest of the league.

Wellington’s super sophomore Will Mitchell managed to sneak a puck past Buzzers net minder Jacob Gorinsky in the late going of the second period to make the game 3-3 but that was all for either team in the rest of the contest on a sleepy Sunday afternoon.

Wellington found themselves trailing early in the first period against St. Mike’s but battled back in the later part of the frame to lead after 20 minutes.

Dukes pivot Zander Latrielle  was fouled going to the St. Mike’s net and earned a penalty shot for his troubles.

The Windsor native but on some of his best moves to make Gorinsky bite early and then swept a forehand volley into the yawning cage for his first OJHL tally.

Later in the first, Luke LaPalm counted on the power play thanks to helpers from David Campbell and Jacob Vreugdenhil at 15:37 to push the Dukes ahead 2-1.

But Wellington succumbed to penalty trouble themselves in the second stanza, allowing the Buzzers a chance to get back into the game.

Aidan Shepard would fire home a power play marker at 5:42 of the second to tie the game at 2-2.

Wellington marched right back to the penalty box on the subsequent shift and Matt Milic would push the visitors ahead on the man advantage at 8:25. With Wellington’s goalie removed for the extra attacker, Jacob Vreugdenhil potted a goal with 39 seconds to go to give the Dukes a 4-4 tie against the visiting Haliburton Huskies Friday.
(Jason Parks/Gazette Staff)

From there, as he has in previous games against the locals, Gorinsky was outstanding, making 35 saves.

In the other end, Wellington’s Ethan Morrow wasn’t tested nearly as often but the Kingstonian had a few moments where his mettle was tested and the Dukes’ net minder needed to come up big to keep the contest tied.

On Friday night, Wellington had to play come back against the Huskies a couple of times.

Since the Dogs moved to the north central Ontario and ceased being the Whitby Fury, the OJHL club has seen their fortunes turn upwards and their play on Friday exuded that trend.

Wellington and Haliburton traded goals in the first with former Duke Cam Kosurko and Julien Jacob each scoring for their respective squads.

In the second, the Huskies had a quick strike offence that saw sniper Christian Stevens score at 5:51 and set up Pat Saini at 8:30 to give the visitors a 3-1 lead but Campbell would feed Boyer at 9:15 to get Wellington back to within a goal.

In the third, Campbell picked up his second helper of the game at 4:08 when he set up Ed Moskowitz to square the affair at 3-3 on the power play but Stevens and the Huskies reestablished a one goal cushion just over 2:30 later.

Down a goal late into the contest, Campbell found Vreugdenhil with 39 seconds left to tie the game to make it 4-4.

Both Aidan Spooner in the Haliburton net and Wellington’s Jacob Osborne made 40 stops in 70 minutes of work.

The first edition of the Battle of Quinte takes place on Friday night in Wellington as the Dukes welcome their Loyalist Parkway rivals from Trenton. On Sunday, Wellington travels to Milton to play the Menace.