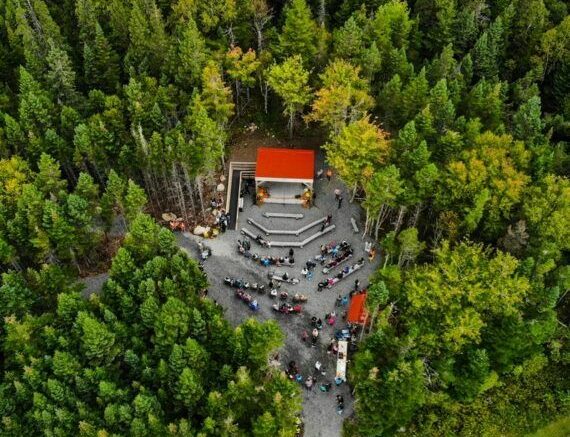 From coast to coast, Healing Forests are being planted as a means of reconciliation with Indigenous peoples. The David Suzuki Foundation (DSF), in partnership with the National Healing Forests Initiative (NHFI), are helping these forests take root. Soon, Prince Edward County will be among the communities to host a healing forest, with one being grown on private property in Waupoos.

Not only will these forests help to promote individual wellbeing, but they will help advance the national dialogue about reconciliation and what that means going forward. As per davidsuzuki.org, these forests are dedicated to Canada’s first inhabitants and their descendants in order to educate people on this country’s tragic past, as well as to offer individuals a chance to begin their own journey toward reconciliation.

The NHFI began in 2015 with Patricia Stirbys and Peter Croal. The pair were on a healing walk in Ottawa when the release of the Residential School Truth and Reconciliation Report was released. This inspired them to grow green spaces dedicated to healing across Canada.

Stirbys is a member of Cowessess First Nation (Saskatchewan) and works in the financial sector. Croal is an exploration geologist for the federal government and later with the Canadian International Development Agency (CIDA).

Speaking on behalf of DSF was Jode Roberts, who explained a bit about the concept as well as the facilitation of healing forests across Canada.

When asked why DSF decided to collaborate with NHFI, Roberts responded it was, in part, a way to move toward reconciliation.

“First, we simply adore the idea and the people behind the project. The DSF has long been committed to reconciliation and working to support and empower Indigenous people and communities,” stated Roberts. “We are aiming to double down on this commitment, through training and education for our staff, while also trying to help bring our community along on this journey of truth and reconciliation. Supporting the creation of more Healing Forests is a small way that we are trying to continue nudging this important movement along.”

Since the NHFI began collaborating with the DSF this year, 16 properties have been chosen as future sites of healing forests. These properties range from public to private.

“The National Healing Forest Initiative are looking have communities come together to honour residential school victims, survivors and families and promote reconciliation by dedicating spaces as Healing Forests,” he explained.

Roberts described he local project, proposed by Marcatus QED in Waupoos, as being “compelling”. He also explained the process through which the DSF is helping grow more healing forests.

“The David Suzuki Foundation has partnered with NHFI for the next two years and is offering small grants to support efforts to establish local Healing Forests. We received dozens of applications and are now supporting 16 groups by providing $2,000 each,” he said. “The proposal by Marcatus QED to create a Healing Forest in a private forest in Prince Edward County was compelling, and we look forward to seeing where their project goes from here.”

While the intent of the forests may be the same, they vary in nature with urban healing forests differing greatly from those in more rural areas.

“One of the neat aspects of this idea is that there is no prescribed set of criteria for Healing Forests. What a Healing Forest looks like in a downtown urban centre versus a rural or wilder setting will obviously vary,” said Roberts. “It is open to interpretation. The crucial ingredients are the people – settlers and non-Indigenous people and groups that come together through the process of establishing a local Healing Forest. And that is the focus of NHFI – green spaces of all shapes and sizes and deepening community bonds, not arbitrary quantities of trees or plants.”

Roberts explained the management of the healing forests would, in the future, be the responsibility of the individuals or communities who initiated their growth.

“The entire process, from planning to managing the spaces, are up to each community. Some of the Healing Forests are at schools, parks and churches and on private property. So, whomever is managing those spaces is responsible. It is less a certification scheme (like forest certification), more a community building exercise,” Roberts explained.