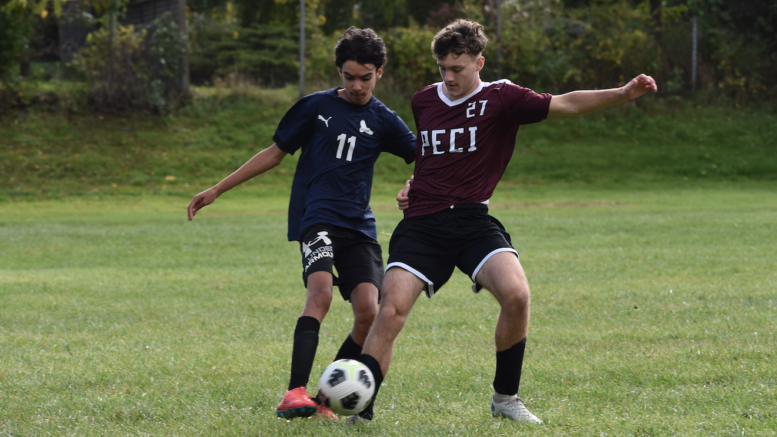 PECI's Riley Grimmon challenges a member of the Quinte Christian Eagles in action earlier this season. The Panthers are putting their undefeated regular season on the line tonight at home against East Northumberland. (Jason Parks/Gazette Staff)

The PECI senior boys soccer team has put their passion for victory on full display over the months of September and October.

The Panthers have assembled a 7-0-0 record so far,  blazing a trail through the Bay of Quinte Athletic Conference and powering through every opponent so far.

Panther coach Pamela Goad entered this season as her ninth year coaching for the boys squad and said she is very proud of this year’s team.

“We have had some setbacks with injuries and sickness but having a strong bench has made it easier to fill the holes on the pitch. The team has come into the season with a goal of making it to OFSAA  and I am happy to provide whatever support they need to achieve this,” Goad said. PECI Panthers forward Kieran Young has been credited with 10 goals this season in Bay of Quinte action. (Jason Parks/Gazette Staff)

Going into the Bay of Quinte playoffs,  PECI will be a target as the front runner and the players will have to stay focused if they want to make their goal a reality. The Panthers first game of the 2022 season set the tone for their year as it was against a top club from last year in the form of St. Paul’s.

One player who made his presence known in that game,  scoring four goals was senior Kieran Young. Young said the team has been waiting three years to show their skills as the seniors on the team have not competed since their freshman year due to the COVID pandemic.

“I think the team gelled together like I thought it would and the fact we all know each other definitely goes a long way,” Young said. “We all are either good soccer players, extremely athletic or both and that makes all the difference.”

The team has been waiting a long time to show their passion and drive and now they have that chance, with the guidance of their coach, PECI’s Panthers have made themselves known across the Bay of Quinte.

PECI was in action Tuesday at home against East Northumberland, winning 4-2 thanks to a pair from Flynn and singles from Young and Quinn Fischer.and wrapped up the regular season against the Blue Dragons. The Panthers host Bayside Tuesday with a spot in the Bay of Quinte on the line. The Bay of Quinte Finals are slated for Friday, Oct.. 28 at Mary Anne Sills Park in Belleville.

The Central Ontario Secondary School Association championships are to be held the first of week November. The OFSAA tournament will be held spring 2023.