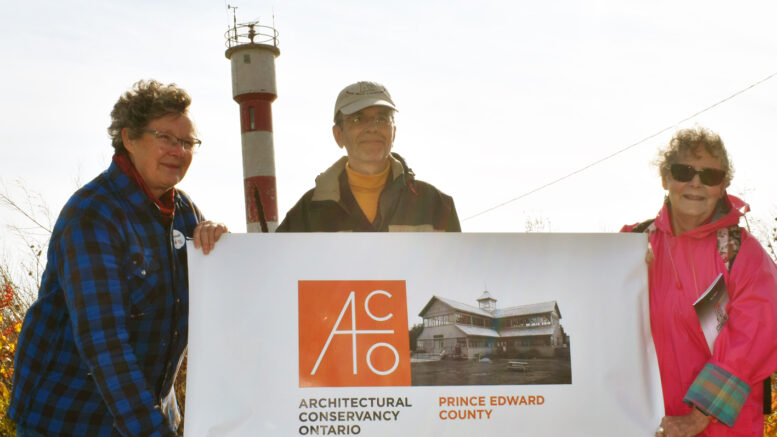 Thanks to a clandestine order made from within the Ministry of the Environment and Climate Change (MECC) and carried out with dastardly timing, a site tour of the Point Petre Lighthouse Complex organized by the local branch of the Architectural Conservancy of Ontario (ACO) had one less stop on Saturday.

Nearly two dozen people were at a heavily windswept Point Petre to hear ACO PEC board member and Save Our Lighthouses Executive Director Marc Seguin speak about the legacy of the original Point Petre Lighthouse built during a cholera outbreak in 1832, a newer and unique Centennial-era installation that replaced the original structure in 1967 along with the site of the light keepers house built in 1962 that was razed earlier this summer with no prior warning to the community and finally the “radio shack”, constructed in 1959 as part of the newly-opened St. Lawrence Seaway to house the radio equipment for the once-essential radio beacon navigation system.

But before the public could view the small structure, bull dozers sent by the MECC ensured the radio building was reduced to rubble by Friday morning.

PEC ACO President Liz Driver explained the local branch reached out to the Ministry of Fisheries and Oceans earlier this year in advance of a tour of the grounds at the tip of Point Petre, calling for a pause in any further demolition and allow the public to survey the site and better understand the rich Prince Edward County maritime heritage.

That correspondence to halt demolition activities was echoed in letters from County of Prince Edward Mayor Steve Ferguson and Bay of Quinte MP Ryan Williams in more recent weeks as the date of the tour neared. “These letters invited the Ministry of Environment and Climate Change to come to county council and open a dialogue as to future plans at the site,” Driver explained.

Ultimately, the bureaucracy within the federal government decided the best path forward was to alert the community of their intentions thought the verbiage of bulldozers and back hoes and felt best the one way dialogue should commence literally hours prior to the site visit.

“We feel very strongly that when they have plans to do something at the site, they should inform the municipality at a bare minimum,” Driver stated. “Absolutely, the people who ordered this knew a site tour filled with people who advocate for heritage and history would be here less than 48 hours after the demolition started.”

Without even the visage of the radio shack or the lighthouse keeper’s residents, it was not difficult to watch Lady Lake O heave and churn in Saturday’s heavy winds and visualize the linchpin of a lighthouse amongst the catastrophic shoals in the area known as the graveyard of Lake Ontario.

With lower than normal water levels, even 75 metres from shore the shallow water and the limestone ledges appeared to force the churning waters back towards the strong westerly gales. The original Point Petre Lighthouse in the early 1900’s. The structure was dynamited in 1970. (Lighthouse Friends.com)

In his presentation, Seguin explained once the light keeper’s home became superfluous by way of automation, the home was utilized by the MECC up until 2012 as staff accommodations for those conducting atmospheric monitoring exercises. The buildings on this site and the lighthouse were scheduled to receive designation under the Heritage Lighthouse Protection Act of 2008 but due to a backlog and lag in the process and change in direction by the federal government, Point Petre and two other lighthouses in Prince Edward County were not and will not be designated.

“That was a decision that was made without any public consultation and didn’t go through any other level of government. It was simply a decision made by Fisheries and Oceans Canada that all those lighthouses in the backlog are taken off the table and no longer eligible to be designated,” Seguin explained, adding under the act, the radio building, the fog horn building and the residence were associated to light keeping activities and would have been protected from demolition had they been approved.

“These were heritage structures that were valued by our community and we were told for over ten years that we only needed to wait and they would be protected,” he said. All those aforementioned buildings have been razed and all that remains is a detached two port garage and the current lighthouse that remains in operation as a navigational aid for recreational boaters.

Seguin explained the current lighthouse, which replaced the original whose fate was decided with dynamite in 1970, was one of two in Canada with the same cement pillar design-the other formerly stationed near Quebec City on the St.Lawrence- and is the only one of its kind still standing in the world.

“This deserves to be protected, it’s the only one of its kind anywhere,” Seguin said, adding the current condition is leading towards a tipping point of deterioration where the federal government could decide to topple the structure rather than rehabilitate it.

“The weather is getting into this building and once that happens, deterioration happens quicker and quicker. This building needs to be protected along with this complex being open so the public can appreciate Prince Edward County’s rich marine heritage the is quickly being lost.”

“The buildings here are more than just buildings. They are part of the history where, for 200 years, ships have been sailing past this point and there’s a legacy of lighthouse keepers and their families living here and maintaining a very important piece of the legacy of shipping on Lake Ontario,” Driver said.

A living link to that heritage was present Saturday in the form of Charlaine Maclean. The daughter of Charles Newman who was the permanent keeper from the late 1940’s until his passing in 1973 took part in the tour-ironic considering her time as a child living at the complex

“People would drive down here and kind of be wandering around so I would go up to them and ask if they wanted to go over to the lighthouse and have a tour- it was 97 steps and then a ladder to the top of the old lighthouse,” Charlaine Maclean said with a laugh “They would give me a quarter or 50 cents afterwards, a donation to the light housekeeper’s daughter.”

Maclean could recall being the only family for miles around and the wicked winter storms that would pass by Prince Edward County.

“You know sometimes snowplows couldn’t get down here and people would leave groceries where the plow stopped Andy father would trudge through the waist deep snow to pick up the staples,” she remembered. Maclean also recalled the days of the Canadian military conducting training exercises in the 50’s and 60’s at the Point and her mother preparing warm, home cooked meals for the more senior officers overseeing the trainees bivouacked in tents and submitting on rations.

As for the day-to-day operations, Maclean said she enjoyed helping her father tend to the kerosene-fired lighthouse lamps and the air compressors that fired the large fog horn.

“Sometimes you couldn’t see the fog banks from shore out in the middle of the lake and if a ship was near, they would blast their horn three times and that was the message to turn the horn on at shore. I was a light sleeper so I would hear them all the time and wake up dad and we would go turn them on,” Maclean said.