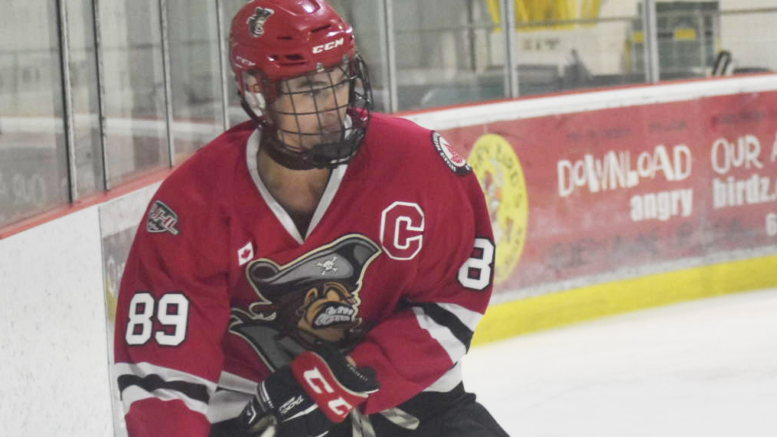 Tied 2-2 late into the 3-on-3 session, a face off in the Port Hope end set up the game winning goal. Ross Maycock scored a pair of goals in the second period for Picton.

McLellan then feathered the puck to an open space to Dingle’s right. Kirby lost control of the puck for a second but then regained the disc and deposited it into the top of the net with 1:02 left in the extra period.

The result moved Picton’s record to 5-2-0, just two points behind second place Amherstivew with the Pirates having three games in hand.

The Napanee Raiders lead the Tod Division, having won their first 10 games but the locals have assembled a four game win streak of their own.

Picton held the play territorially early in the first and forced Dingle to come up back a few times in the opening stanza but it was the Panthers breaking the ice first.

After an extended period of time in the Pirates end, Pot Hope’s Nathan Ford was able to snap a puck past Picton starter Brady Spry at 13:05 to push the visitors in front 1-0 however in the second, it was prime time for one of Picton’s shooters to bust out of a slump.

Winger Ross Maycock should have counted for a handful of goals by now but has found himself stymied by the PJHL pad men.

At the midway point of the second, Maycock came cruising to the Port Hope net, collected a Jack Dow pass through the slot and beat Dingle high to the glove side at 9:44 for the Picton native’s first of the season.

Panthers vet Carter Clarke would be the recipient of a nice feed from Evan Wright at 13:15 to temporarily restore the Port Hope lead but Maycock was at it a shift later.

McLellan would find the Picton winger near the Port Hope net and Maycock made a return trip the Panther’s top bunk to tie the game at 2-2. The Pirates ended up with a power play at the end of the third but Dingle was phenomenal in ensuring his squad was west bound on the 401 with at least a regulation point at the close of 60 minutes. In the other end, Spry was tested in the OT as well and kept the Panthers at bay.

Finally, Picton was able to work a draw play in the Port Hope end to send the Pirates faithful home happy.

Picton is idle until Friday, Oct. 28 and the Pirates play their most hectic stretch of the season. The Bucs are in Napanee, Port Hope and Amherstview in successive nights.

In other Pirates news, Agnes Fraser of Picton was almost a winner in the Quinte Isle’s Camppark Shoot for Loot event in the first night the shootout contest returned to Pirates ice for the first time in over a decade.

In her first attempt, Fraser’s volley from the Camppark logo came within an inch or two from sailing through the shootout board and across the goaline for $50.

The cumulative jackpot means a lucky shooter will shot Thursday, Nov. 3 for $100. Picton will host Napanee that evening for the Raider’s second visit to Huff Estates Arena.