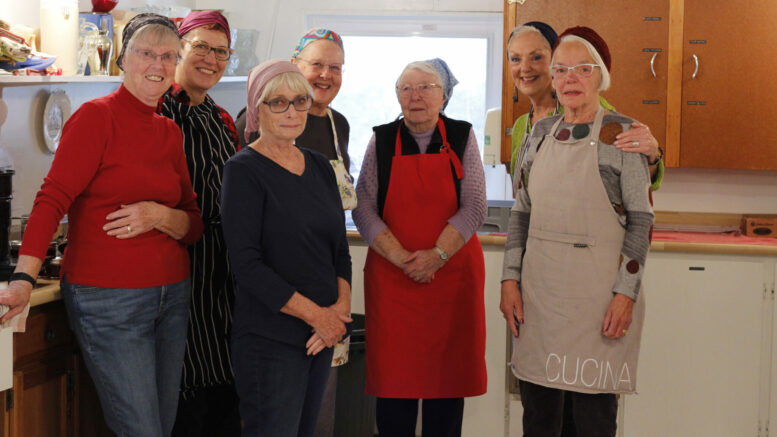 The Prince Edward County Memorial Hospital Auxiliary 'Perfectly Preserved' team have been at work in the kitchen at South Bay United Church prepping for and attending markets as well as ramping up for the Festival of Trees preserve and bake sale. (Desirée Decoste/Gazette staff)

The Prince Edward County Memorial Hospital (PECMH) Auxiliary ‘Perfectly Preserved’ team have been at it all year canning and baking up a storm in South Bay United Church’s kitchen in order to raise funds for the new hospital.

The team of ladies began back in 2013 when 10-11 members and all their homemade goods were turned over and sold at the annual Festival of Trees Hospital Foundation fundraiser. To say the sauces, preserves, jams, etc made with that touch of love you can’t find in the mass produced jars at grocery stores was a major hit was an understatement. In addition to the Festival, the team has realized their goods are in demand and have spread out their trappings to other times and places in Prince Edward County.

“We’re doing the markets,” said Dorothy Speirs-Vincent, member of the Perfectly Preserved team. “We’re at different markets pretty well every weekend and it’s been going really well to the point we have people coming back now which is so nice because they know what they like.”

Perfectly Preserved products range include all different kinds of jellies and jams, condiments, mustards, different pickled items and a large array of baking. This year so far somewhere around 2,700 jars have been filled and mostly sold already. Bryan baked around 1,000 scones which were sold at the Picton markets while Thompson made over 6,000 individual rainforest crackers.

Last year, the team donated $22,000 to the hospital after  expenses and the team is so thankful to the community for all they donate to them.

“People have been very generous,” Speirs-Vincent said. “People bring in jars for us, very often we come on Tuesday morning and there will be a bag or a box sitting on the stoop because we put the word out and people have been giving us all sorts of produce this year. We had crab apples, quinces, apples, pears, blueberries, tomatoes cucumbers, gooseberries, red currents, asparagus and garlic scapes. So we really don’t have to buy all that much sometimes and it means we can do so much more for the new hospital.”

As a new comer to the group, Zyvatkauskas added how much fun it is to be part of the team.

“It’s just so much fun to be part of this group,” expressed Zyvatkauskas to The Gazette. “Its the most fun I’ve ever had volunteering for anything. I think it’s also opened all of our eyes how things that can be done differntly. And while were having fun the hospital is benefiting so its a win-win.” Its a great feeling to be doing something so productive for the whole community and to meet so many people doing it, and yet its fun and I’m learning a lot too.”

The final local market the group will attend this season is Halloween weekend and then the big Festival of Trees sale takes place Nov. 25-27 at Isiah Tubbs and the team’s preserves and baking can be pre-ordered now online

With only so much space for storing made items, the team is looking for a newer freezer to be donated, as a limited number of each item will be pre-made for the upcoming sale. “Were just getting into high gear for our sale in November and then we’ll get a couple of weeks off and start over again,” Speirs-Vincent stated.

For more information or to see the order form please visit https://www.pecfestivaloftrees.ca/festive-foods-order-form