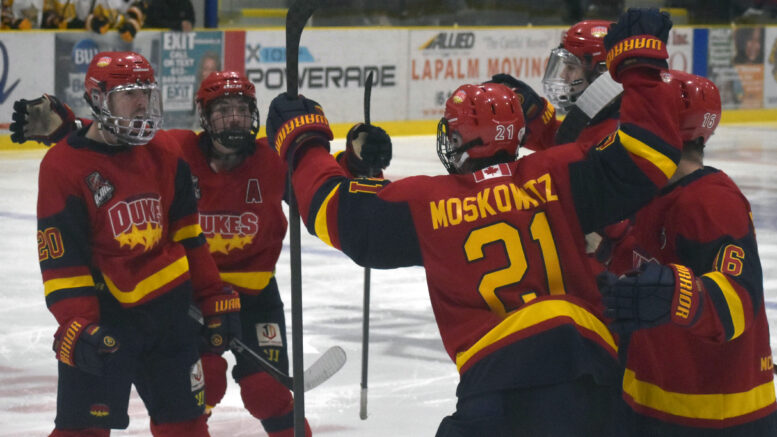 (Left) Luke LaPalm had a power play goal in the early part of the third period in Wellington's 2-1 loss to Trenton Friday night. (Jason Parks/Gazette Staff)

The Wellington Dukes are still struggling to find overall consistency in their game but the proof of when the team is firing on all cylinders (and when it isn’t) was in this weekend’s proverbial pudding.

The locals played a pair of particularly flat periods off hockey on Friday night =at Lehigh Arena and were never able to overcome a two goal deficit to their arch rivals from Trenton.

But on Sunday, when a potential season-changing opportunity presented itself in Milton against the top ranked Jr. A team in Canada, the locals pushed through the adversity and handed the suddenly scorching Menace a dose of happiness from Prince Edward County.

“It sounds cliche but we are still struggling to find consistency in our game,” Smith told the Gazette. Our advance analytics tell us that we should have a much better record than 7-5-0 at this point of the season but there has been a stretch of four or five shifts in each game where we’ve struggled and it’s cost us dearly.”

On Friday, the Dukes were forced to chase the game after going down a pair of goals but on Sunday, the club scored the game’s first goal for the first time since Oct. 7, a key factor when playing a high flying team in a hostile environment.

“Full credit to Milton, they’re building something there but we came in very hungry and Ethan Morrow was huge for us and let us get our legs under us in first few minutes of the game,” the coach added.

The Dukes got on the board in opening shift of the game with Corbin Roach feeding Edward Moskowitz at the 27 second mark to give Wellington an early 1-0 lead.

That margin stood up until early in the second when Aidan Hughes scored the first of two Milton power play tallies in the frame at 2:53.

Connor Hunt and David Campbell helped feed defence man Julien Jacob at 10:25 to temporarily reestablish a one goal margin for the visitors but just over a minute later and with a Wellington skater in the sin bin, Lucas Buzziol was set up by Hughes to make it a 2-2 game heading for the second intermission. Luke LaPalm and Lucas Robinson mix it up during the third period of Friday’s game at Lehigh Arena. (Jason Parks/Gazette Staff)

In the third, neither Morrow nor Milton starter Will Goumas blinked until inside the final five minutes of regulation and it was Wellington captain Jacob Vreugdenhil converting a Jared Langdon pass at 14:23 to give the Dukes their third and final lead of the evening.

Morrow came up huge down the stretch to ensure the Dukes emerged from the Milton Memorial Arena with a pair of desperately needed points.

“We were pretty good at not taking our foot off the gas for an extended period of time and when we might have slipped, Mo came up big for us,” Smith said.

On Friday in front of the largest crowd in a couple of seasons, Wellington played an inspired third period and looked nothing like the squad who was being outshot by visiting Trenton 25-12 through 40 minutes.

A Sam Williamson goal in the opening two minutes and a Jordan Fuller tally partway through the second left the Dukes with a hill to climb in the final stanza and an inspired hockey club emerged from the dressing room after 40 minutes.

“The players and the staff weren’t happy at all even though we were still in the game,” Smith said. “But we really came out of that intermission a more determined group.”

Luke LaPalm got things rolling early on the power play, beating Ethan Fraser to the short side at the 2:36 mark to cut the deficit in half at 2-1.

More pressure form the Dukes in the period as the ice was severely tilted in their favour led to a Golden Hawk placing his hand on the puck in the Trenton crease, affording Wellington’s shiftiest skater Zander Latrielle a penalty shot at 8:57.

Despite a host of moves coming towards the Trenton goal, Fraser stared down Latrielle to keep Wellington from tying the contest.

The Dukes had a pair of power plays including one at the end of frame with starter Jacob Osborne pulled that provided them plenty of looks at the Golden Hawk goal but Fraser was rock solid as Wellington out shot Trenton 15-2 in the period.

Trenton would skate away with the win but one has to wonder if the tempo for Sunday’s win against the top ranked and previously undefeated Menace was set in the third period of Friday night’s game which saw 1,100 fans in the stands.

“It was a great atmosphere and I think we controlled all things we needed to in the third to really make a game of it and almost  come back on Trenton,” Smith said.

The Dukes hit the road on Friday and take on the Muskies in Lindsay before travelling to Toronto and playing the Patriots on Saturday night at Westwood Arena.

On Monday, Wellington pays their first non-showcase visit to Cobourg to play the host Cougars.

Wellington’s next home action is Fri. Nov. 4 against North York.