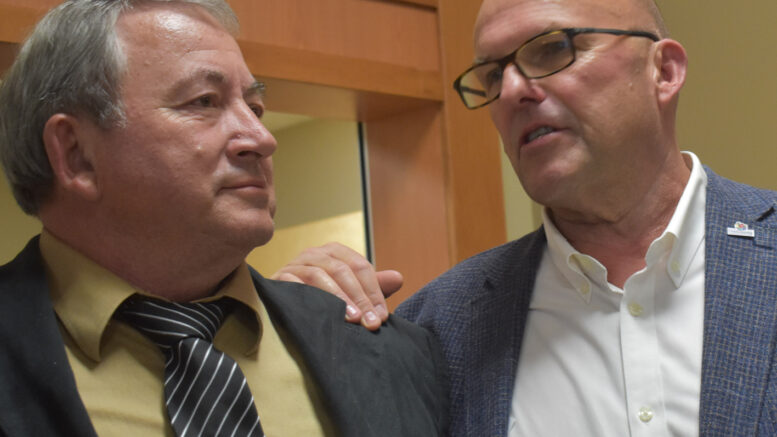 BOOKING A RETURN TRIP TO SHIRE HALL Candidate Terry Shortt and incumbent County of Prince Edward Mayor Steve Ferguson share a moment after the results of the 2022 Municipal Election were announced at Highline Hall Monday night.

At the start of the 2022 municipal election campaign, incumbent Mayor Steve Ferguson spoke of a term interrupted with local and international emergencies.

The seasonal flooding issues that impinged our island community in the late 2010’s and then a global Novel Coronavirus outbreak that changed life as humans across the planet know it made it impossible to see some of the big idea pictures Ferguson and council had planned in the 2018-2022 term. That theme of unfinished business struck a chord with the local electorate as voters decided to send Ferguson back to the head of the Shire Hall Horseshoe on Monday night.

And not only is Ferguson back as the county’s spokesperson and lead representative, a total of nine incumbents and returnees were successful in defending or reclaiming council seats for the next four years. While a total of nine incumbent and/or returning candidates are heading back to Shire Hall, four newcomers including Wellington’s Corey Engelsdorfer and son Malcolm were ready to rip the lid off a new chapter in their lives.

In Picton, voters were confident in the work Phil St. Jean (26.7 per cent of the popular vote) and Kate MacNaughton (26.03 per cent) to return the pair to Shire Hall. Challenger Jane Lesslie just missed on being a successful first time candidate with 25 .84 per cent of the vote, missing MacNaughton’s mark by a scant six votes.

In Wellington, Corey Engelsdorfer (52 per cent) cruised to the village’s seat while incumbent Janice Maynard (24.83 per cent), returnee Roy Pennell (21.298 per cent) and newcomer Sam Grosso (19.87 per cent) topped the Ward 4 (Ameliasburgh) poll.

In Athol, newcomer Sam Branderhorst (46.29 per cent) was a decisive winner as was incumbent Bill Roberts (77.8 per cent) in Sophiasburgh.

In Hillier, a complete newcomer slate saw Chris Braney led polling (58.72 per cent) while in Ward 8, one time councillor David Harrison (51.75 per cent) is on his way back to Shire Hall but not without holding off challenger Ben Thornton (48.25 per cent. Finally, in South Marysburgh, incumbent John Hirsch 53.77 per cent) is a two term councillor.

Ferguson said it was a long 23 weeks of campaigning while keeping up with the work the mayor’s office requires.

“We have an affordable housing issues, doctor recruitment and a whole host of things we need to gets started on solving right away and the work starts tomorrow,” the mayor said. “I’m looking forward to meeting the new members of council.”

After introductions, the mayor said it was critical to go around the room and listen to what objectives are important to members of council over the next four years. Mary Malone plants a kiss on the cheek of Mayor Steve Ferguson Monday night after it was announced he would return to top spot at Shire Hall. (Jason Parks/Gazette Staff)

“Given what we’ve seen in the campaign period, there’s going to be unanimity moving forward,” Ferguson said.

In addition to the doctor and housing shortage, Ferguson made sure to point out historical and heritage preservation and support of the County’s agriculture sector as key areas of focus in the next four years.

“The one thing we cannot lose sight of is the preservation of Prince Edward County and I ask anyone I talk to-please respect the reasons that brought you here because that’s vitally important,” the mayor said.

Ferguson also pointed out the crowd that had gathered as a community at the Highline Hall on Monday and in the post-reveal din, opposing candidates- both successful and unsuccessful- were conversing and offering  best wishes for the future.

To the mayor’s point, there was high degree of civility and camaraderie on Monday night that was encouraging-particularly when juxtaposed to the federal and provincial political arenas.

“I don’t think this happens anywhere-it’s a macabre situation where those elected and those unelected in the same room but I’m hopeful those who weren’t successful this time around stay engaged, get involved with some of the committees and are willing to serve their community in different ways,” Ferguson said. “We are going to need their help.”

With no incumbents running for re election in the either public school board wards, Rachel Prinzen (North) and Stacey Lewis (South) were elected as first time trustees for the Hastings Prince Edward District School Board.