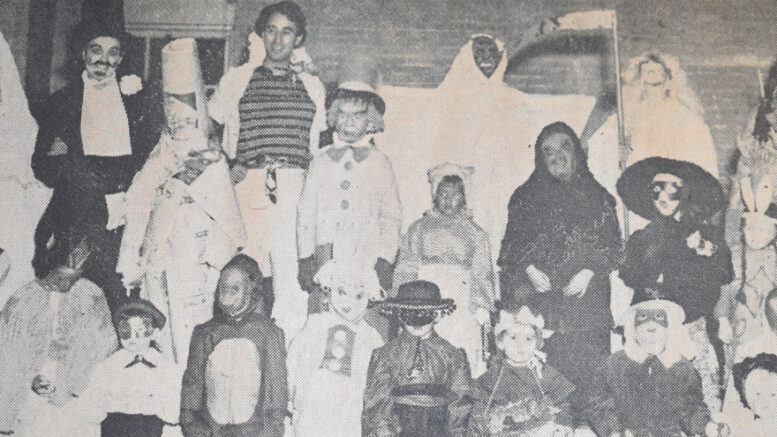 Back in the fifties, Hallowe’en evening was a busy time in our household.

After an early supper, wolfed down, with room left for candy, we hauled out old clothes, sheets, hats and created our costumes on the fly. Worn work pants, rubber boots and a smear of shoe polish became a hobo, a threadbare bedsheet with holes cut out for eyes became a ghost, a bathing suit worn over long johns became an acrobat, or add a cape and Superman. We had to wait till dusk, but by 6 pm, the gates opened and we streaked out of the house, armed with old flour sacks or pillow slips for our candy stash.

Kitted up in our makeshift costumes, we ran down the street towards our friends’ houses. Along the way, we merged with more ghosts and goblins to form a battalion of spooky candy sucking creatures filling the street, invading verandahs and yelling ‘trick or treat’. Doors were furtively opened a crack and arms emerged to throw candies into our outstretched bags. Some folks seemed delighted to see us, but we weren’t there to be fussed and fawned over, ‘just the candy, ma’am’. Word quickly got out amongst the wandering throngs as to where the best treats in town could be found. “Go to Zuerrers, they’ve got caramel popcorn”, “Rutherfords have candied applies”, “Silverthornes are giving out nickels”. Our routes were adjusted with each new bit of intelligence.

Once we had exhausted the neighbourhoods and folks had turned off their front porch lights and retreated to their basements, we moved en masse towards the local arena where the Lions Club held a kids’ party. There were games and prizes, bobbing for apples, the first to whistle after eating a cracker with peanut butter, best or scariest costume, but everyone went home with more candy. Exhausted, costumes in tatters, bits missing, we collapsed on the living room floor and immediately emptied our bags, eating our favorites, doing some trades, and sorting candies into piles according to our personal preferences. Perhaps there was some squabbling due to the late hour and candy buzz but we were soon dispatched to our beds, but not before taking great care to find a particularly clever hiding place for our candy, a spot that would outfox snooping siblings and even parents.

One candy everyone hated was the Halloween kiss, an extruded toffee pellet the size of a flattened marshmallow, wrapped in brightly coloured orange and black waxed paper and twisted at either end. They were the colour of baby poop, but hard enough to pull out your fillings – they tasted like molasses and dirt and I never met a kid who liked them. They were always the last candies in the bag under the bed. Usually by Christmas they miraculously disappeared along with the dust bunnies, single socks and school art. Landfills from the time surely have a layer of these foul confections and with a half life of uranium-235, they’ll live on in infamy.

While we slumbered and dreamed of our candy horde, the older lads in the village were up to mischief. In the 50’s most people still had an outhouse for occasional or fulltime use and an inventory of easily accessible and movable thrones would have been sussed out in the weeks before Halloween. On November 1 morning, we rushed out to see whose outhouse was sitting on the main street. One year the local boys outdid themselves and had one on each corner. ‘They got ole man Johnson’s crapper, and he’s still in it!” Potty humour indeed and we laughed and laughed.

I lived in fear that they would find our old outhouse behind the garage but fortunately it remained a secret until decommissioning. I don’t suppose much has changed since the 50s’, fundamentally that is. Outhouses are gone and parents are more vigilant but costumes and decorations are scarier than ever and the candy positively steal-worthy. The kids are still wild and crazy, stoked on sugar, running from house to house, never wanting the experience to end. It is a good night, a night to celebrate our myths and wonder about what’s out there.