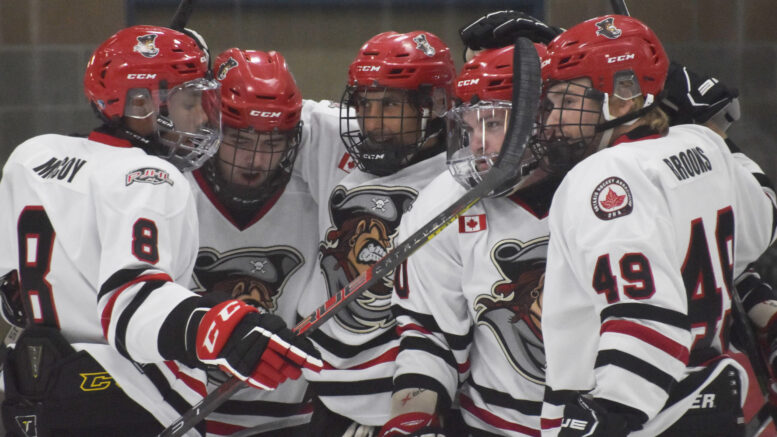 The Picton Pirates have quite a bit to digest after their busiest stretch of the 2022-23 Provincial Junior Hockey League season.

Playing three games in three successive nights, Picton held a lead or were tied with their opposition in the third period of all three road games which saw them in Napanee, Port Hope and Amherstview, respectively.

While third place Picton would only secure two of a possible six points, the locals showed they are on the precipice of competing with the upper echelons of the PJHL’s Tod Division.

On Friday, the Pirates got out to an early 2-0 spread and lead for most of the game against the Raiders, only to see the hosts score a pair of goals in quick succession part way through the final frame. Just over eight minutes into the game, Nick Kirby collected a Reese Hancock shot off the pads of Bailey Maracle and beat the Raiders net minder to the far post at 8:06 to give Picton a 1-0 lead.

At the half way mark of the frame, Picton’s net minder Brady Spry had a quick up to Landon McLellan at the Napanee blue line.

The Picton captain spotted Jack Dow who skated into the Raiders zone and beat Maracle low for a power play goal at 10:05.

Up 2-0 after one, Picton nearly made it a three goal spread as Cole Stevenson intercepted a pass off the second period’s opening face off and just missed beating Maracle five seconds in.

Napanee solved Spry when a bad bounce for Picton wound up on the stick of Ryan Kidd who beat the Picton goalie at the 1:29 mark.

The Pirates were ultimately undone in a 23 second sequence in the third. Napanee captain Noah Westwater potted an unassisted marker at 3:55 to tie the game at 2-2 and then fellow overages Soren Zamuner had the game winner at the 4:17 mark.

Picton had a power play 6-on-4 opportunity at the end of the game but couldn’t solve Maracle and the Napanee defence to force overtime.

The next night in Port Hope, Picton’s newest addition in the form of Ethan Beattie carried a shutout bid into the final minute of the contest as the Pirates skated away with a 4-1 lead.

For the second straight game, Kirby opened the scoring with a goal at 3:14.

Then, with time winding down, Dow potted his second of the weekend on the power play with 28 seconds left in the opening frame .

Picton built on its lead late in the second as Ian Harrison added his second helper of the game on Ross Maycock’s third goal of the campaign.

Quinte West native Hayden McLaughlin picked up his first PJHL point of his career on the play.

Late in the third, Stevenson bagged his second of the year with help from Harrison and Dow at the 15:57 mark. With Beattie cruising, a late Picton penalty unfortunately left the Pirates a man short and Luca Fernandez had a goal with 37 seconds left in the game to make it a 4-1 final.

On Sunday, Picton had a difficult time in the opening period and were down 2-0 after one as the host Jets pounded the Pirates net and Spry with 22 shots.

Josh Kudo and Andrew White picked up the goals for the Jets.

The Pirates had the second’s only goal as Reese Hancock banged home his first of the year with help from Hosea Aculiak at 13:07.

In the third, Dow managed his third tally in as many games to make it a 2-2 contest but Sam Lawson’s first in a Jets uniform at 10:41 was just enough for Amherstview skated away with a win.

Eric Russell’s 13th of season into the empty Picton net with 34 seconds left made the final 4-2.

Picton’s only action this weekend comes when they host the Napanee Raiders Thursday at Huff Estates Arena at 7:30 p.m.