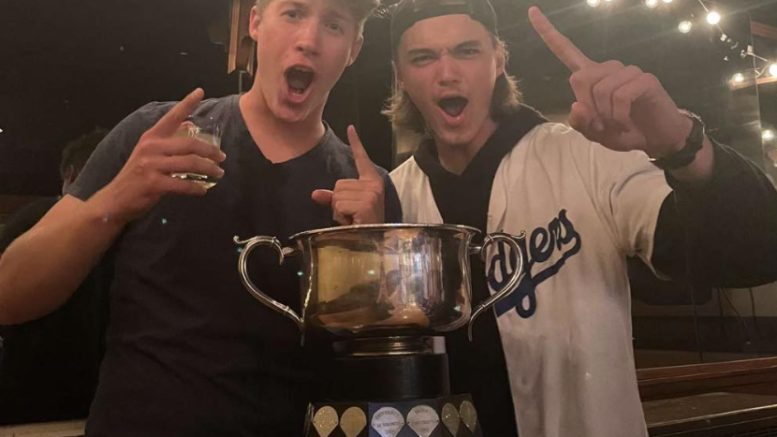 A pair of Prince Edward Collegiate Institute alums who spent the fall hurling for a historic Queen’s University baseball club are basking in the glory of the program’s first Ontario University Athletics (OUA) title.

Senior Will Ronan and sophomore Logan Blower were both called to the bump in the 2022 OUA finals in Kitchener earlier this month in a contest that saw the Gaels outlast the vaunted University of Toronto Blues 13-11, setting off rare celebration amongst the Kingston baseballers. Will Ronan worked a perfect ninth inning to preserve a 13-11 win for his Golden Gaels in the 2022 OUA Championships in Kitchener earlier this month. (Submitted Photo)

Blower came on part way through the game with the Gaels behind the defending champions but managed to stop the bleeding and allow his bat mates to chip away at the U of T lead.

A six run, bat around inning in the top of the seventh made Blower a potential winner at 12-8 as Queen’s was staked their first lead of the contest.

Blower gave way to Ronan and while the senior didn’t have his best command of the season over the last two innings, it was enough to beat back the Blues in a slugfest. Ronan coaxed the Blues to go 1-2-3 in the bottom of the ninth, a rare blemish free inning for either side.

“It’s hard to try to describe how that felt. That last out took me from the most high stress moment of my athletic career to the most celebratory,” Ronan said as he described the ultimate moment at Jack Couch Field. “I threw my glove up in the air and everyone of my teammates sprinted at me. My third baseman jumped on me and I had to catch him and throw him off to not get knocked to the ground. Then the rest of the team came barreling in. I’ve never experienced anything like that it was like a dream.”

With the stakes as high as they possibly could be in Canadian University baseball, the ebb and flow of the one game elimination was strong currents for the Gaels squad and, trailing after the first 5-0, the Queen’s squad was forced to dig deep almost from the start.

“We were thrown into deep waters but nobody on the team was ready to give up. Our lineup is full of clutch hitters and with big innings in the 7th and 8th we took the lead. We were able to stay focused because we knew the type of team we were. We had a championship mentality and spent the season proving we were capable of the gritty baseball needed to bring things back our way,” the fourth year computer engineering student  added.

At 6’4″, Logan Blower was an imposing presence on the mound for Queen’s this season. (Submitted Photo)

Blower, a second year transfer student in his first year at Queen’s, combined with Jordan Leishman to pitch 39 innings for the Tricolour this season and the West Lake product didn’t allow a run coming into the 2022 OUA tournament in his last 18 innings of work.

Enrolled in mining engineering, Blower spent the summer playing baseball in Ohio with a number of US Junior College and NCAA players and said OUA ball is on par with that level of competition.

“I was blessed to join a team at Queen’s that all had the same goal of winning a championship and being a part of our championship effort this year, it was an experience like no other,” Blower said. “I knew and I think the whole team knew after our first weekend of ball against Carleton that we had a really good opportunity to do some damage in the OUA, and we definitely did that. So to be apart of that was really special and something I’ll treasure forever.”

Ronan, who got to play with his older brother Gavin last year, said he will savour being a part of this historic victory.

“I’ve been lucky enough to play on  great teams my whole life. When I played on the Quinte Royals we had a couple dominant seasons that I’m proud to have been a part of. The OUA championship has to be my greatest sports moment so far though. It’s the highest level of ball I’ve ever played and to be on the mound when we won the program’s first championship is something I will always be grateful for,” he added.