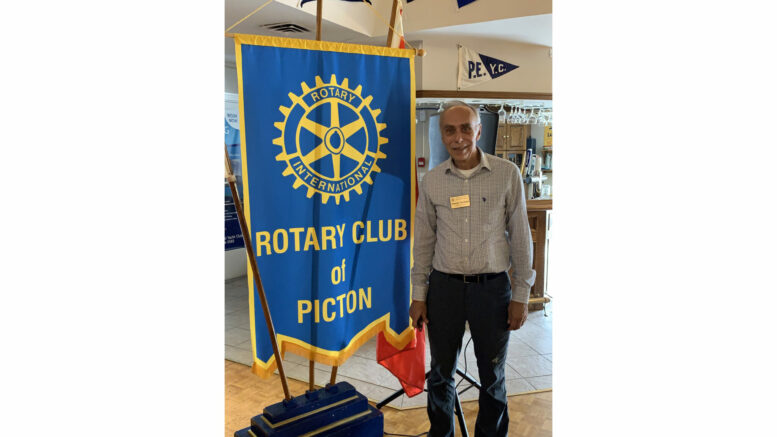 Steve Rutledge of the Rotary Club of Whitby Sunrise spoke to The Rotary Club of Picton at the Prince Edward Yacht Club Tuesday concerning the work the club has been doing in Laos. (Submitted photo)

At its 16th meeting of the 2022-2023 Rotary year, the Rotary Club of Picton invited fellow Rotarian Steve Rutledge from the Rotary Club of Whitby Sunrise to speak to of clean water efforts work in Laos at the Yacht Club in Picton on Tuesday. A highly decorated service club member, Rutledge is President of Adopt A Village In Laos (AAVIL), serves on a Rotarian International Committee,  recipient of two Port Hope Civic Awards,  is a recipient of two Paul Harris Awards and The Spirit of Rotary Award. In 2016 Rutledge was awarded the Family and Community Award by the Rotary Club of Courtice. In June 2020 Rutledge was awarded the Bob Scott Disease Prevention Award from the Rotary District 7070.

Over the last dozen years,  Rutledge has ventured into mainly northern Laos, seeking to help rural villagers secure the most basic of needs for sustained life.

Since 2009, AAVIL has provided over 65 villages filtered water systems,  ensuring over 32,000 rural villagers have access to clean drinking water. The group has  constructed 24 permanent water supply systems,  built over 40 banks of toilets, assisted in a dozen school construction projects and continues to sponsor a host of primary, secondary and university students.

“We did a permanent water supply for a school last year,” Rutledge stated to Picton Rotary. “The school was paying $1,200 US a month just for their water bill and that’s because 696 kids and 39 teachers were using that water for everything. And so this year we decided that now that they have water, we realized they only had 12 working toilets for 720 people so we added another eight. And this year were going to start up the feminine hygiene program for all these secondary school girls.”

Rutledge then gave a demonstration of the water filters they deliver to villages/villagers in Laos. The cost for one filtration system is $125.

“The filter is just a ceramic pot,” explained Rutledge. “But this filters out about 98 per cent of all the bacteria and the sediment in the water. The last two per cent is the most critical and so we use a silver nitrate solution and that kills everything and so were now at 99.98 per cent clear. And this is good for 6-8 years and then the filter is all that needs to be replaced. Most of the $125 cost is in transportation and getting it down from the south end of Laos up to the north on bad roads. The filtration rate for one of these systems is at first it takes forever, but once you use it for a week or two you will see the flow rate will be much faster. For a large jug like these it usually takes three hours. And it serves 6-8 people.”