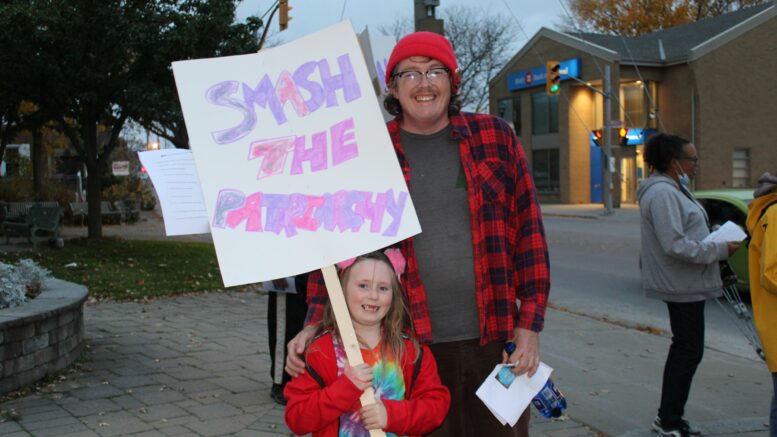 After a brief pause due to the pandemic, Alternatives for Women (AFW) led the annual Take Back the Night (TBTN) march down Picton Main Street on October 26th.

The march, a protest against the rising tide of violence against women, drew an impassioned crowd of close to 20 who walked down Main Street, waving placards and raising awareness about this insidious societal ill. Before disembarking down the street, the crowd gathered at the Cenotaph to hear a few words from Holly Baines, Training and Public Engagement Coordinator at AFW.

As Baines explained, TBTN is intended as not only a protest, but also an act of reclamation of walking after dark-an experience that rarely comes without apprehension for women.

“Tonight, we gather to Take Back the Night – to reclaim the simple act of walking in the streets after dark without fear,” said Baines. “That fear, of walking the streets after dark, is a reasonable fear. Our culture often tolerates violence – particularly violence against women and children,” said Baines. “Ask any woman, or gender-diverse person, how they organize their lives after dark. You will learn that most, if not all, have a safety plan for themselves.”

From the details of a route to finding a walking partner, Baines illustrated the often-overlooked ways in which women move about in fear. Sadly, that fear is based in the statistics surrounding violence against women and gender-diverse people.

“Ask any woman or gender diverse person if they have been cat-called, harassed or heckled on the street and you will hear astonishing stories,” she remarked. “The fear a woman, or a gender diverse person feels walking alone after dark is reasonable and rational. And the fear doesn’t stop at the door to our homes.  Across Canada one woman is killed every six days by her intimate partner. Five women were killed in Ontario by intimate partners last month alone. More than half of the deaths of women in Ontario were caused by trauma.”

“These are violent deaths,” Baines added, noting the County is not exempt from such tragedy. IN PROTEST-Close to 20 members of the community attended the TBTN march and most held placards such as those pictured. (Sarah Williams/Gazette Staff)

Speaking to the Gazette after the march was Julie Watson, Executive Director at AFW. Watson explained that while AFW’s in person TBTN events were cancelled for a couple of years due to Covid-19, there was a virtual TBTN held last year with agencies in Belleville through the Quinte Coordinating Committee Against Violence.

“TBTN has it origins in the 70s and is now done internationally,” Watson added.

For more information about AFW and/or violence against women and gender-diverse people, please visit: https://www.alternativesforwomen.org/.