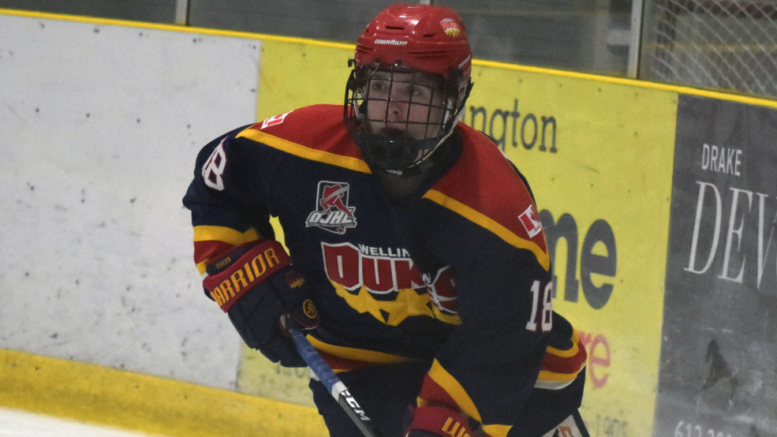 A week after flexing their defensive muscle in allowing just two goals over 180 minutes of hockey, the Wellington Dukes displayed an offensive flare, potting 18 goals in two games to sweep action against the North York Rangers and the Mississauga Chargers.

With a pair of lopsided wins, Wellington improved their overall record to 12-5-2. While the Toronto Jr. Canadiens are still running away with the Southeast Conference at 38 points, the Dukes have at least interjected themselves into the discussion when it comes to determining who the top three clubs in the circuit are at 26 points and a healthy .684 winning percentage.

On Friday, the Dukes managed to skate to a 4-0 first period lead en route to an 8-4 doubling of the visiting Rangers.

Matheson Mason, Jacob Vreugdenhil, Connor Paronuzzi and Connor Hunt all fired first period goals to a build a sizeable lead that held until past the midway point in the game that drew 571 fans to Lehigh Arena on a very pleasant November night on the shores of Lake Ontario.

Wellington had a slight hiccup in the 13th minute of the middle stanza as Nik Bannister and Owen Ibottson beat Wellington’s Ethan Morrow in the span of 10 seconds to put the Blueshirts back into the contest at 4-2 but Corbin Roach fired home a pair of goals one shift apart, getting set up by Paronuzzi at 14:17 and 16:39 respectively to re establish  Wellington’s four goal spread before the close of the second,

Cruising into the third, Wellington and North York traded goals in the final frame.

Ed Moskowitz potted Wellington’s second power play goal of the game 29 seconds in to make it 7-2.

Just under a minute later Jack Rimmer counted for a goal to answer the Wellington volley but the Dukes made it a crazy eight night at the 4:55 mark as Ryan Smith scored his second goal in three games after missing nearly a month of action due to injury.

On Sunday afternoon, the Lehigh ice surface was decidedly tipped in one direction and that was down hill of which ever way Wellington was skating.

For the second time this season, the Dukes hit double digits on the score sheet and coupled that with a blank sheet submitted by Ethan Morrow.

Posting his second goose egg in his last three starts, the Kingstonian matched his 2021-22 shut out total with a pair, stopping all 22 Mississauga volleys.

The Dukes will travel from the dregs to the brim of the OJHL this weekend, playing in St. Mike’s on Thursday, hosting the Northwest Division leading Collingwood Blues on Friday and taking on the aforementioned high flying Toronto Jr. Canadiens at the Scotiabank Pond on Sunday night.