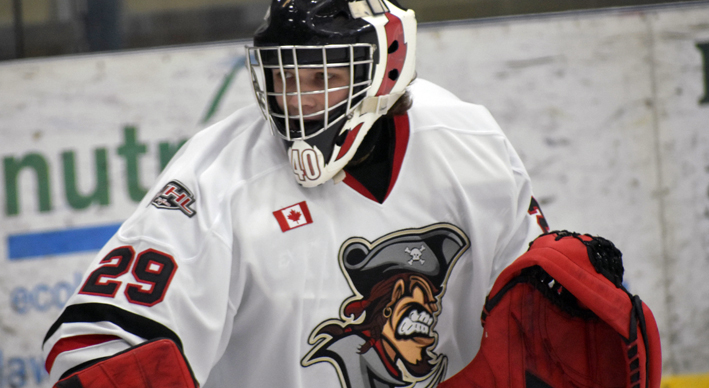 The Picton Pirates can be forgiven if they felt like they were watching the same movie for the third time Thursday night, knowing full well how it ended and not for one second liking the final scene.

For the third straight game head-to-head against the defending Tod Division champions, the Picton Pirates took a one goal lead  over the Napanee Raiders nto the third period.

And, for the third straight contest this season, the Raiders would overcome that deficit to beat back the Pirates and defeat the Picton squad. With the win, Napanee managed to move their record to 12-0-0 and now stand alone atop the division with a 14 game winning streak to kick off the 2022-23 Provincial Junior Hockey League season.

Picton managed to get on the board early when Nick Kirby intercepted a puck in the neutral zone and was afforded a partial breakaway.

Skating to the top of the circles, the Consecon native ripped a wrist shot over the shoulder of Raiders starter Bailey Maracle at the 11:44 mark to give the Pirates a 1-0 lead.

The Pirates had a number of chances to extend their lead but the goaltending of Maracle kept the visitors in check.

Early in the third, both Picton’s Cole Stevenson and Jack Dow had Maracle beat but couldn’t bury the puck to give the Pirates highly after sought insurance marker.

Finally, part way through the third period, the Raiders broke through off a scramble in front of the Picton net.

Nick Goosney shot the puck through a crowd at the 7:32 mark of the final frame to knot the score at 1-1.

Ethan Beattie who had been matching Maracle save for save in the Pirates net was outstanding in saving everything he could track off the sticks of the Raiders shooters.

But for a second time in the period, Beattie would be screened on a Napanee volley that would slip past the Whitby native and into the Picton net.

Raiders captain Noah Westwater’s shot from the blue line caught a piece of the Picton net to Beattie’s left at 14:45 to give the visitors their first lead of the game.

In total, Maracle made 46 saves in the win while Beattie was hung with a tough luck loss, making 50 saves.

Picton hosts the Amherstview Jets on Thursday night and then travel to Campbellford on Sunday night for a road contest against the Rebels.