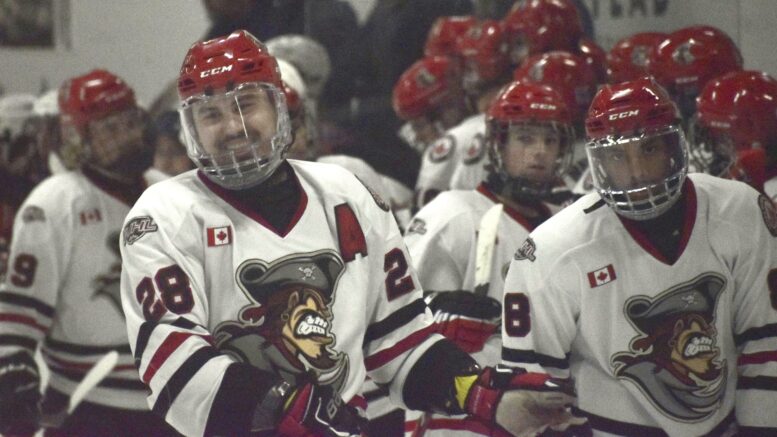 It took overtime and a hat trick effort by veteran Jack Dow but the Picton Pirates got off the slide on Sunday night in Cambellford.

Dow grabbed a loose puck and pumped a game winner past Rebels goalie Brayden Friedrich at 2:25 of the 3-on-3 extra session to move Picton’s record to 7-6-0 and cap off a hat trick.

With the win, Picton snapped a three game losing streak. Campbellford got off to a great start when Aiden Trevorton skated in off the half wall and snapped a puck through the catching mitt of Picton starter Ethan Beattie at 10:21.

The Pirates would answer just over five minutes later when Dow fed Landon McLellan at 15:46 to make it 1-1.

Late in the frame, the Pirates would push ahead off a draw won in their end by Cole Stevenson.

Picton’s Rheydan McCoy would make a nice area pass and Dow was able to track the puck down and fire a bullet past Friedrich with 1:08 left in the first.

The teams would play back and forth in the second. Kaleb Gliiam would score off a scrambled draw in the Picton end at 2:20 but McLellan reciprocated just over a minute later, sweeping a back hand through the wickets of Friedrich at 3:29.

Later in the frame, the Rebs got a power play goal off the stick of Ben Hansen at 11:14 to make it a 3-3 game heading into the third.

Dow’s 10th of the season set up by Stevenson and Zack Brooks at 2:32 gave Picton it’s third lead of the contest and the locals looked to be cruising to the win until Hansen’s second with 51 seconds left in the contest set the stage for overtime where Dow potted his third of the game.

On Thursday, the Pirates played it close with the visiting Amherstview Jets through a pair of periods only to watch the opposition take off in the third.

After a scoreless first, Picton would get the ice breaker in the second on the powerplay as McLellan would spot a wide open Ian Harrison for a tap in goal at 4:47.

The Jets would respond with three straight.  Sam Lawson Matt Donovan and Josh Kudo worked to get the Jets in front 3-1.

Pictonwas able to get back to within a goal in the waning moments of the second as Stevenson banged home a loose puck with just six seconds left to make it 3-2 at the end of two.

Picton had a glorious chance to get back to even on the power play early in the third only to see Jets starter Sam Closs sprawl out and make a desperation save on the goal line to keep the Jets lead in order. Landon McLellan had a pair of goals for Picton Sunday. (Gazette Staff)

Then, Josh Kudo was able to skate down the ice and put a puck past Brady Spry at 6:12 of the final stanza to make it a 4-2 game and any wind that might have been in the sails of the Pirate ship immediately dissipated.

Brendan O’Brien and Boden White would tally in the third for the visitors to make it a 6-2 final.

Picton hosts Campbellford Thursday night before playing the Raiders in Napanee on Friday.

The Quinte’s Isle Campark Shoot for Loot event progressive  jackpot has moved to $200. Entry to try your luck in the shoot out is as simple as coming to a Pirates game and picking up a program.

A stamped Quinte’s Isle logo means your shooting for cash at the start of the third period.