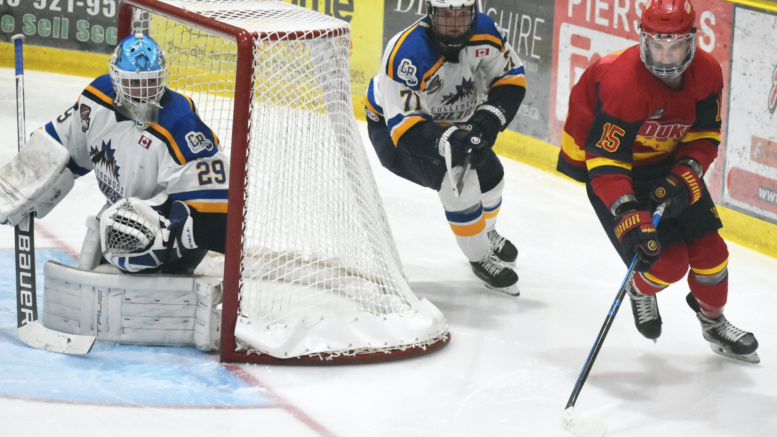 Barrett Joynt had two goals to help propel the Wellington Dukes to a 5-1 win over Markham Dec. 20th.(Jason Parks/Gazette Staff)

Last weekend, the Wellington Dukes proved they can win the games they should.

This weekend, the Wellington Dukes proved they tracking to be part of the Ontario Junior Hockey League’s elite in 2022-23.

Facing both OJHL Conference leaders and a plucky St. Mike’s team in the St. Michael’s College bandbox, the Wellington Dukes captured five of a possible six points and extended their undefeated in regulation record to nine games. Ethan Morrow backstopped his club to an overtime win and a regulation tie this weekend.
(Jason Parks/Gazette Staff)

Wellington (14-5-3, 31 points) trail the third place Trenton Golden Hawks by three points but have three games in hand on their arch rivals with the two clubs meeting at the gateway to the Trent-Severn on Friday.

Nearly taking a full compliment of points was reason enough to make it a happy dressing room at Lehigh Arena during practice on Monday but you can tell Coach Derek Smith is still looking at a team in transition.

“We certainly feel like we turned a corner and are starting to believe we can play and compete with those teams ahead of us in the standings. Everyone in our room are committed to getting better every day and putting in the work to keep this trend going,” Smith told the Gazette.

While the bench boss liked his club’s resiliency on Sunday night against the top ranked Toronto Jr. Canadiens, the game was a run-and-gun affair where the locals coughed up a pair of two goal leads before falling in overtime.

“That certainly hurts, but we have to look at it as good learning experience for this group and we had a good response and push back at the end of the second period to regain the lead,” he said. After a scoreless first period, Luca LaPalm and Jacob Vreugdenhil staked the visitors to a 2-0 lead through the opening ten minutes of the second.

The hosts, who had racked up a 19-3-1 record  going into Sunday’s contest, fought back with a pair of goals inside a minute to make it 2-2.

Jordan Karafile beat Ethan Morrow at 16:10 and Niko Laus followed up with a goal 50 seconds later to get the JC’s to 2-2.

But Wellington’s Barrett Joynt potted his fifth goal in his last four games at 18:46 off a nice pass from Ryan Smith to ensure the Dukes exited the period with a winning margin.

That margin doubled early in the third when LaPalm bagged his second of the game at 4:37.

But Blue, Blanc et Rouge that reside in the Soctiabank pond weren’t going to be denied their 20th win of the campaign and it was OJHL veteran sniper Tyler Fukakusa scoring a pair of goals in the last half of the third to tie the contest up at 4-4 and force overtime.

After a scoreless four-on-four frame, the teams went to a three-on-three period and at the midway point of Period 5, Alex Laurenza was able to speed away on a break away and best Ethan Morrow on for a game winner.

A game prior, it was the Dukes dumping a conference leader in the three-on-three portion of overtime.

Mitchell Young took the puck from Ryan Smith and circled along the Dukes blue line.

The lanky Elmira native who was facing off against his older brother Spencer on the Collingwood Blues side built a head of steam and soon found himself with an extra step on his checker as he cut in off the half wall.

Making a move to get Blues goalie sliding across the Collingwood goal mouth, Young beat Julian Molinaro to the far goal post and deposited his first OJHL tally to the top of the net, setting off a mob celebration on the Lehigh Arena ice to the delight of the 618 in attendance.

The news kept getting better for Young over the weekend as the Sarnia Sting of the OHL agreed to sign the 17-year-old to a standard player agreement. Young’s next hockey game came on Sunday and it was of the Major Junior variety.

“He’s really taken flight since he came to us and he’s been working on all the little things a defencmen of his age needs to learn to be effective in junior hockey,” Smith said. “He’s got a dynamic skill set and it was certainly a special moment for the Young family to see their sons play in an OJHL game and then to have Mitch win it like that…what a moment.”

Wellington got an early lead on the Northwest Conference leaders as LaPalm broke the ice at 10:28 and then David Campbell added a power play tally at 12:12.

Adam O’Marra got one of those goals back just 43 seconds later to make it a 2-1 game heading into the break.

In the second, Carter Diceman was sent in alone on Morrow and made a spectacular move at the 10:56 mark to tie the game at 2-2 where it stood until Young’s overtime heroics.

On Thursday, Wellington needed the offence going early and often but still managed to out pace the host Buzzers 7-5.

In a wild first period, Wellington got goals off the sticks of Joynt (2),  Edward Moskowitz, and LaPalm but only escaped with a 4-2 lead in the opening stanza.

The teams traded goals in the second as tallies from Campbell and LaPalm 42 seconds apart midway through the period were sandwiched by power play goals from St. Mike’s Jon Morello.

In the third, Smith fed Connor Hunt for the dagger that made the spread 7-4 Wellington heading into the final ten minute of the game.

With the goalie pulled, Bryce Sutherland tacked on a meaningless goal with 28 seconds left to make the contest a 7-4 affair.

On Friday, Wellington will be in Trenton for their lone match up of the weekend in a game that is sure to have hockey fans from both ends of the Loyalist Parkway salivating.

“It wouldn’t be a Battle of Quinte game without emotion and lots of fans packing the rink,” Smith noted. “We are expecting an emotional game Friday night in front of a full barn.”